I’m afraid I have something of a confession to make. When learning about the dangers posed by thawing permafrost, it never occurred to me that there might be such a thing as underwater permafrost. Turns out there is, and that’s melting too.

Across the Arctic, numerous peer-reviewed studies show that thawing permafrost creates unstable land which negatively impacts important infrastructure and impacts Indigenous communities. Now, a new study from MBARI researchers and their collaborators published in the Proceedings of the National Academy of Sciences finds dramatic changes offshore and is the first to document how the thawing of permafrost submerged underwater at the edge of the Arctic Ocean is affecting the seafloor.

About one quarter of the land in the Northern Hemisphere is permafrost or frozen ground. At the end of the last ice age (12,000 years ago) melting glaciers and sea level rise submerged large swaths of permafrost. Until just recently, this submerged permafrost had been largely inaccessible to researchers. But now, thanks to technological advancements, including MBARI’s autonomous mapping robots, scientists are able to conduct detailed surveys and assess changes in the seafloor.

High-resolution bathymetric surveys in the Canadian Beaufort Sea have revealed changes in the seabed from 2010 to 2019. Using autonomous mapping robots, scientists documented multiple large sinkhole-like depressions—the largest the size of an entire city block of six-story buildings—had developed in less than a decade.

“We know that big changes are happening across the Arctic landscape, but this is the first time we’ve been able to deploy technology to see that changes are happening offshore too,” said Charlie Paull, a geologist at MBARI who led the study with Scott Dallimore from the Geological Survey of Canada, Natural Resources Canada, and an international team of researchers. “While the underwater sinkholes we have discovered are the result of longer-term, glacial-interglacial climate cycles, we know the Arctic is warming faster than any region on Earth. As climate change continues to reshape the Arctic, it’s critical that we also understand changes in the submerged permafrost offshore.” 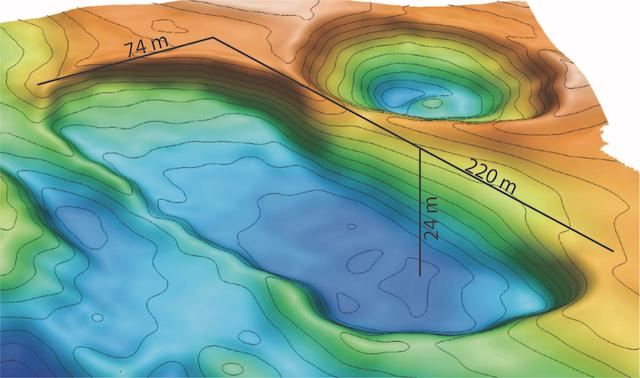 It seems there’s something of a thawing and re-freezing process going on, which could account for the creation of sinkholes without any real methane release, but that doesn’t mean that couldn’t change if frozen organic matter is thawed long enough to start rotting. I’m honestly more worried about the stability of methane clathrates. If it turns out this process is widespread on the seafloor in the Arctic, or if it’s becoming more so, then that could cause a lot of problems. As ever with this stuff, we probably won’t know if we’ve crossed a deadly threshold until it’s far too late to do anything about it. It would be better to be proactive than reactive.

On the plus side, maybe it’s just Kroll waking up.

Living near green spaces reduces your risk of stroke by 16%. » « Tegan Tuesday: Stuart Little and the recovery of lost art