One thing that is fast becoming a central theme of my work is the notion that, in addition to decentralizing political power, and creating a more democratic economy than capitalism can provide, we also need view ourselves as a part of the “natural world”. That means moving away from the historical trend of using technology to separate ourselves from the rest of the biosphere, and instead more fully integrating human civilization with the ecosystems that surround us.

This includes a lot of the standard stuff from the solarpunk genre: urban agriculture and urban wildlife, waste management that minimizes or eliminates pollution, and an end to wasteful things like planned obsolescence. It also goes beyond that, to molding ourselves to better suit our ecosystems, and to reduce the amount of labor and energy required to survive in a sometimes hostile landscape.

As the climate warms, the trend in much of the world seems to be towards stable or increasing annual rainfall, but with all of that rain coming in a smaller number of more intense storms. The practical effect of that is a worsening cycle of drought, flooding, and erosion, as the majority of the year is too dry for most plant life, and the sudden, intense rainfall floods the landscape causing landslides, and washing away both plant life and topsoil.

This, in turn, is likely to worsen the next year’s drought, while doing little to provide actual relief, as the water all rushes out to sea, or evaporates quickly following the downpour. The result is a cycle that’s likely to affect a huge portion of currently inhabited land, starting with the areas already suffering from this, like California:

As climate change intensifies the severity and frequency of these extreme events, amplifying refill rates could help the state reach a more balanced groundwater budget. One practice, called water banking or managed aquifer recharge, involves augmenting surface infrastructure, such as reservoirs or pipelines, with underground infrastructure, such as aquifers and wells, to increase the transfer of floodwater for storage in groundwater basins.

“Integrating managed aquifer recharge with floodwaters into already complex water management infrastructure offers many benefits, but requires careful consideration of uncertainties and constraints. Our growing understanding of climate change makes this an opportune time to examine the potential for these benefits,” said senior author David Freyberg, an associate professor of civil and environmental engineering at Stanford.

The researchers designed a framework to estimate future floodwater availability across the state. Developing a hybrid computer model using hydrologic and climate simulations and statistical tools, the team calculated water available for recharge under different climate change scenarios through 2090. They also identified areas where infrastructure investments should be prioritized to tap floodwater potential and increase recharge.

As things currently stand, flood waters tend to be dangerous. They sweep up badly stored chemicals, human and animal waste, and sediments carrying pollution from past eras, resulting in a mix of poisons and bacteria that can do a lot of harm. Building infrastructure to catch that water, clean it, and direct it into aquifers would be a huge investment, but one that I think would be well worth it, and have benefits lasting far into the future.

Similar to things like food forests and managed prairies, water conservation and banking practices can help us build up not only our own resilience, but also the resilience of surrounding ecosystems. 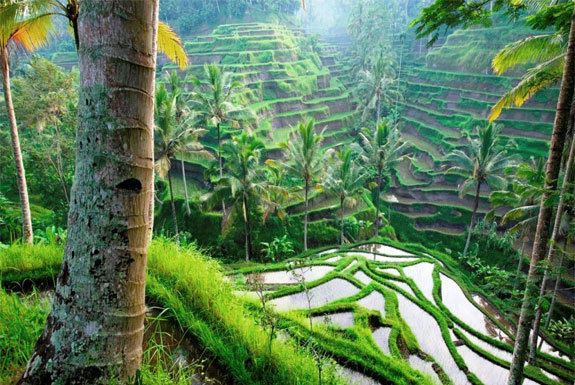 “For most crops, irrigation simply provides water for the plant’s roots. But in a Balinese rice terrace, water is used to construct a complex, pulsed artificial ecosystem. Water temples manipulate the states of the system, at ascending levels in regional hierarchies.”

The industrial revolution, colonialism, and capitalism all worked to devastate the biosphere of this planet in ways we’re still working to fully understand. We must turn from being consumers of the world, to being stewards of it. In the past, rhetoric like this might have been used to push the idea that we should just “leave nature alone”, but I want to be clear that that’s not what I’m suggesting.

The ecological collapse we’ve created means that we have a responsibility to use our technology and understanding to help our ecosystems survive, for our own benefit. That’s likely to mean increased intervention in what remains of wild spaces, at least in some ways. I think it’s obvious we should work to end the conditions that drive practices like deforestation and over-fishing; but it may also mean things like using banked or desalinated water to irrigate drought-stricken “wilderness”, if we can find ways to do so.

This is a complex issue, and must be approached as such. The measures taken to help one region could prove devastating in another, and it’s almost certain that such efforts will only work if undertaken in a cooperative manner across the arbitrary borders that divide the world into “nations”. As I’ve said before, a better world is possible, but I believe it will require the creation and maintenance of global solidarity. We cannot continue to indulge exploitation and bigotry, if we want to survive.