Raksha, alas, has arthritis. When I first got her, waaay back in 2007, she was very high-energy, and could run circles around most other dogs we would encounter. As she got older, she started straining muscles when she went all-out, and we had to start being careful how much we let her run. A couple years ago, it took a very rapid turn for the worse. She couldn’t make it up stairs without us lifting her by a cloth under her belly, she wouldn’t eat, she started losing muscle mass in her hind legs – it was all very depressing, and it seemed like she wouldn’t survive another year. We got arthritis meds for her from the vet, and it completely turned things around. Within a month or so she could go up the stairs again.

After we got to Scotland, she seemed to improve even more. We had been worried the move would be too much for her, but she’s been more active, more energetic, and generally happier since we’ve been here. We had to switch her to a different arthritis medication, because that’s what the vet here was able to provide, but it has worked well. It’s clear that her hips still bother her, and they are slowly getting worse, but the meds make an incredible difference.

As a side note – this is one reason why it’s so important to have universal healthcare. For Raksha, having access to this medication has extended her life by two or three years at least, and allowed her so much more happiness than I thought was left to her. For a human suffering from arthritis, or any other debilitating condition, that can mean decades of fulfilling life, simply by having reliable access to the right medication. It should go without saying, but apparently it doesn’t, so I’ll say it again – that should be worth more than profit.

Anyway, we’ve been getting her meds refilled by mail since the pandemic started, but when we went to get a refill this time, they told us we had to bring her in. We don’t have a car, a significant portion of Uber drivers refuse to let dogs in their cars, and cabs are expensive, so we walked.

This summer has been delightful for me, and a bit too chilly for Tegan. We’ve had, I believe, one or maybe two days where the temperature might have reached 80°F(26.7°C). Today was in the 60s or 70s, and partly cloudy. It was pleasantly sunny when we set out, with a nice breeze. The walk was something like five miles(8km) round trip, with a couple stops for business/banking, and a couple big hills.

There was a time when neither I nor Raksha would consider that a particularly long walk, but we’re both older than we used to be, and I’ve gained weight (though I’m working on changing that). More importantly, none of us have done much walking since the pandemic started, because there hasn’t really been anywhere to go. We make sure Raksha gets her exercise pretty close to home, but where tiring her out used to take a couple hours of running around, now it takes a quarter of the time. It’s sad to see, but she still seems to enjoy it. Such is life. 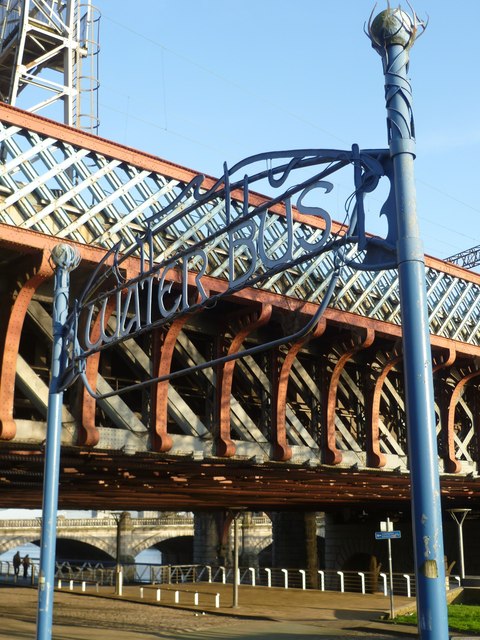 Broomielaw Water Bus sign. The bus is no longer in service, and honestly the river doesn’t see much use these days, except by seagulls. The old sign’s still there, though.

So we walked. Very slowly. Gone are the days where I have to remind her not to pull on the leash.

I’m honestly very fond of Glasgow. It has an interesting mix architecture, a few tall hills that give a bit of a view, and the slightly melancholy feel of a city that used to be a major industrial hub, and isn’t quite as central to global commerce as it once was. There’s a lot of construction going on year-round, and the city seems to be fairly busy most times of day. While Scotland’s re-opening has been going pretty well, there are still fewer people out than there were last August, many stores and restaurants are closed, and where Tegan and I were in the distinct minority with our mask-wearing back in March, they’re now required in most businesses, and about half the people walking around outside are wearing masks of one sort or another. We’re still relying on bandannas, but most people seem to have bought either surgical masks or some of the various re-usable ones that are now so common. I feel like a lot of people’s ears must be a little sore from being used as mask anchors, but maybe not. At some point I plan on whittling myself a wooden mask frame with slots for quilted filters I can run through the wash, but I need to track down some good wood for that. It’s a longer-term project, as I expect that novel viruses and masks are going to be much more present in the second half of my life than they have been in the first.

Anyway, we got to the vet, after stopping to let the dog rest in a couple parks along the way, and experienced our first big change in procedure since the pandemic started. We had to go around the back, call them to let them know we were there, and then wait outside until they came to get Raksha. I think we ended up waiting somewhere over half an hour.

Which brings us back to the weather. No matter what city I’ve lived in, someone would, at some point, tell me that if I didn’t like the weather, I could just wait five minutes. This has always had a touch of hyperbole to it. Not so in Glasgow. I don’t know if this is normal in the rest of the UK, though I expect it’s not far off, but the only time there’s weather that’s constant, particularly from one day to the next, is when there’s rain.

The reason the UK is so warm, despite being farther north than much of Canada, is that the Gulf Stream is constantly bringing heat up from the tropical Atlantic, and blasting the island with warm, humid air. The change of conditions as it leaves the ocean and rises up over this island results in a great deal of water condensing out and falling down. Sometimes there will be rain that lasts a few days, and farther south there seems to be a lot of flooding.

But in Glasgow, the default seems to be that if you don’t like the weather, wait a few minutes and the odds are good that it’ll change. We sat in chairs kindly provided by the vet, in gentle sunlight, and a few minutes later, were the beneficiaries of a gentle, soaking rain. The veterinarian came out, realized it was raining, and gave us an umbrella. I had considered bringing one of our own, but decided against it. About five minutes after we got the umbrella, the rain stopped.

Rottenrow Gardens. A few rows, not much in the way of rot. Naming conventions on this island continue to intrigue me. This is the former site of the Glasgow Royal Maternity Hospital.

Raksha got her checkup, and some vaccines. She’s got a lump on her throat that seems to be benign, but it’s also likely the reason she’s been making the occasional horrible hacking noise. Apparently when she lies a certain way, it probably puts a little weight on her windpipe, and irritates it.

We got her meds, and headed back. It was lovely to be out among humanity for a while, and I still enjoy seeing people’s reaction to Raksha. Generally, most people seem to find her charming, and children seem to find her both fascinating and a little scary. A surprising number of them seem to think she might be a wolf of some sort, and I suppose they have a bit of a point. We were dry by the time we got home, and really my only regret was that I didn’t have any money to give to the folks who asked for some. Hopefully I’ll be able to start doing that again soon.

I don’t know how much longer that trip will be doable for Raksha, but she seemed to enjoy most of it, even if it was a bit longer than she’d like. She’s currently sleeping the sleep of one who has done about all she can do for the day, and Tegan and I are feeling just a little bit more connected to humanity. Glasgow is, on balance, a beautiful city. It seems unlikely we’ll be able to stay here as long as I’d like, but it’s a good place to be while we can.

As mentioned earlier, I’m more than a little short on money these days. There are far fewer jobs than there are people looking for them, so the patrons of this blog are our only stable form of income. It’s wonderful to have people willing to pay me for work they can access for free, so I try to show my appreciation with periodic patrons-only articles, and science fiction. If you’d like to support the work I do here, access a little extra content, or just pay for my dog’s food and meds, you can sign up at patreon.com/oceanoxia. The beauty of crowdfunding is that no single person needs to spend very much for the cumulative effect to make a big difference. Either way, thank you for reading, and thank you for sharing my work with others, should you choose to do so.

Think like a Sponge: Global warming intensifying rainstorms in North America » « Positive Leftist News Roundup from @mexieYT , plus a couple additions of my own.