When I was a young warthog, I attended Waldorf Schools. One of the things required of me was the artistic decoration of the various essays I wrote. We were required to illuminate our work, in imitation of European monks copying religious texts. The exact details of these decorations were generally left up to the students. Sometimes it was faint drawings behind the text, sometimes it was color gradients around the edges, and sometimes it was doodles in the margins relevant to the nature of the essay.

What I didn’t do, really was spend much time studying the phenomenon of marginalia. For those of you who have, it’s likely that you’ve noticed a lot of snails. So. Many. Snails.

Yea, slimy things did crawl on grass, and poke their eyes at me

There are snails fighting knights, snails minding their own business, even the occasional Divine Hoversnail with attendant worshipper: 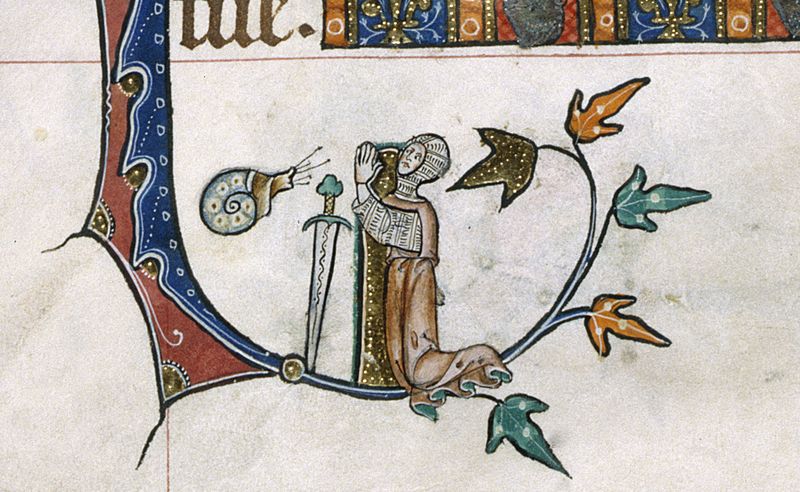 There are various theories as to why snails fill the borders of these texts, but having lived in Scotland for almost a year now, I have come to believe in one theory in particular.

Even to this day, the inhabitants of monasteries generally keep gardens. Over the centuries these have provided food and medicines for monks, as well as  occasional means for generating a little income to help meet the expenses of the monastery. This meant that the monks creating these marginalia likely spent a great deal of time maintaining gardens, and as any gardener knows, it’s an activity that will regularly bring you into contact with snails.

What I did not realize – what had not really sunk in – was just how many snails there are here.

There are a lot of snails here.

I let Raksha out three times a day usually, and we generally just go into the courtyard seen in the various pictures of her I’ve posted. Once the sun goes down, the snails come out. 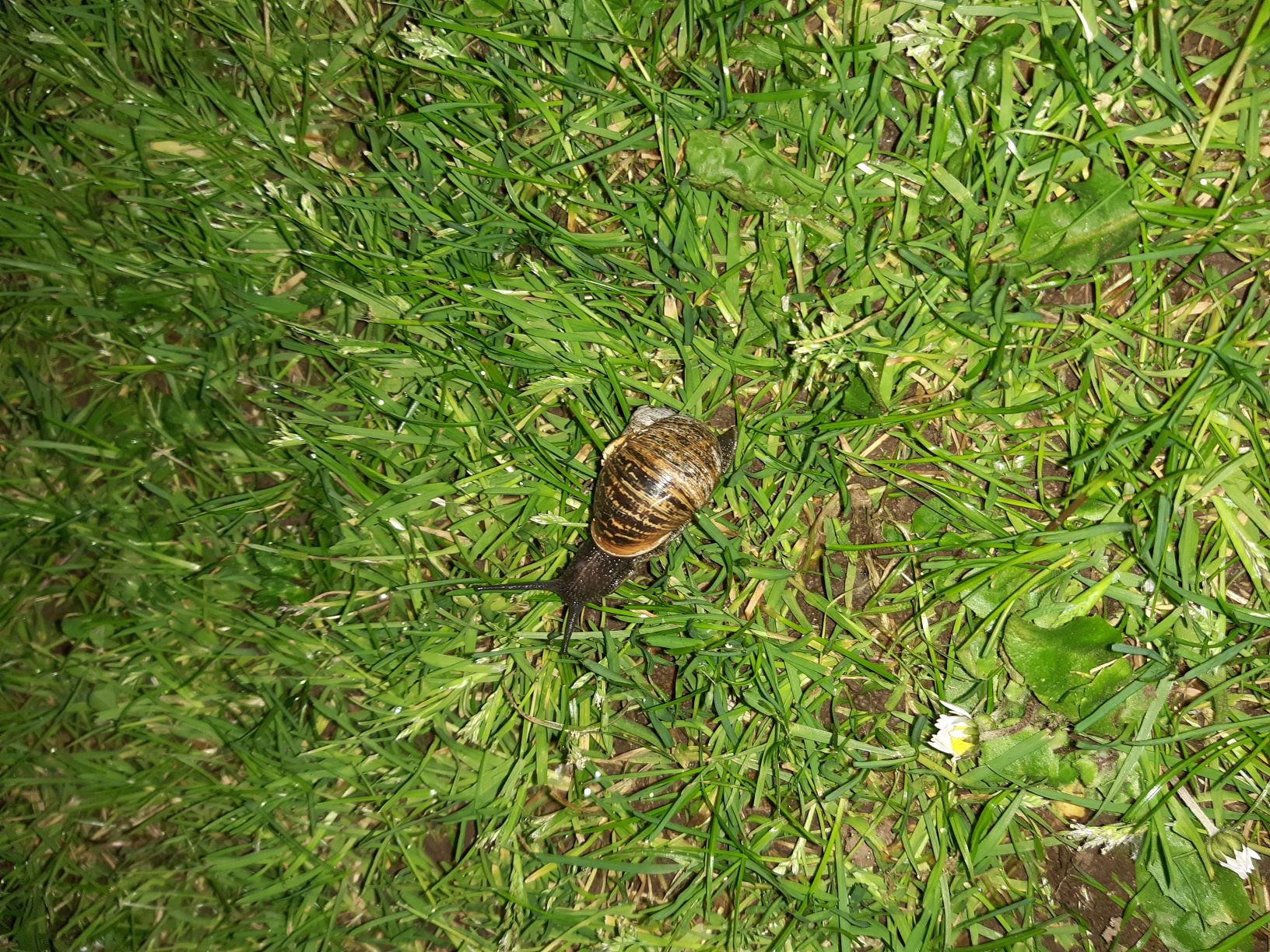 An active, interested snail, scanning the world for more plants to eat or knights to fight. 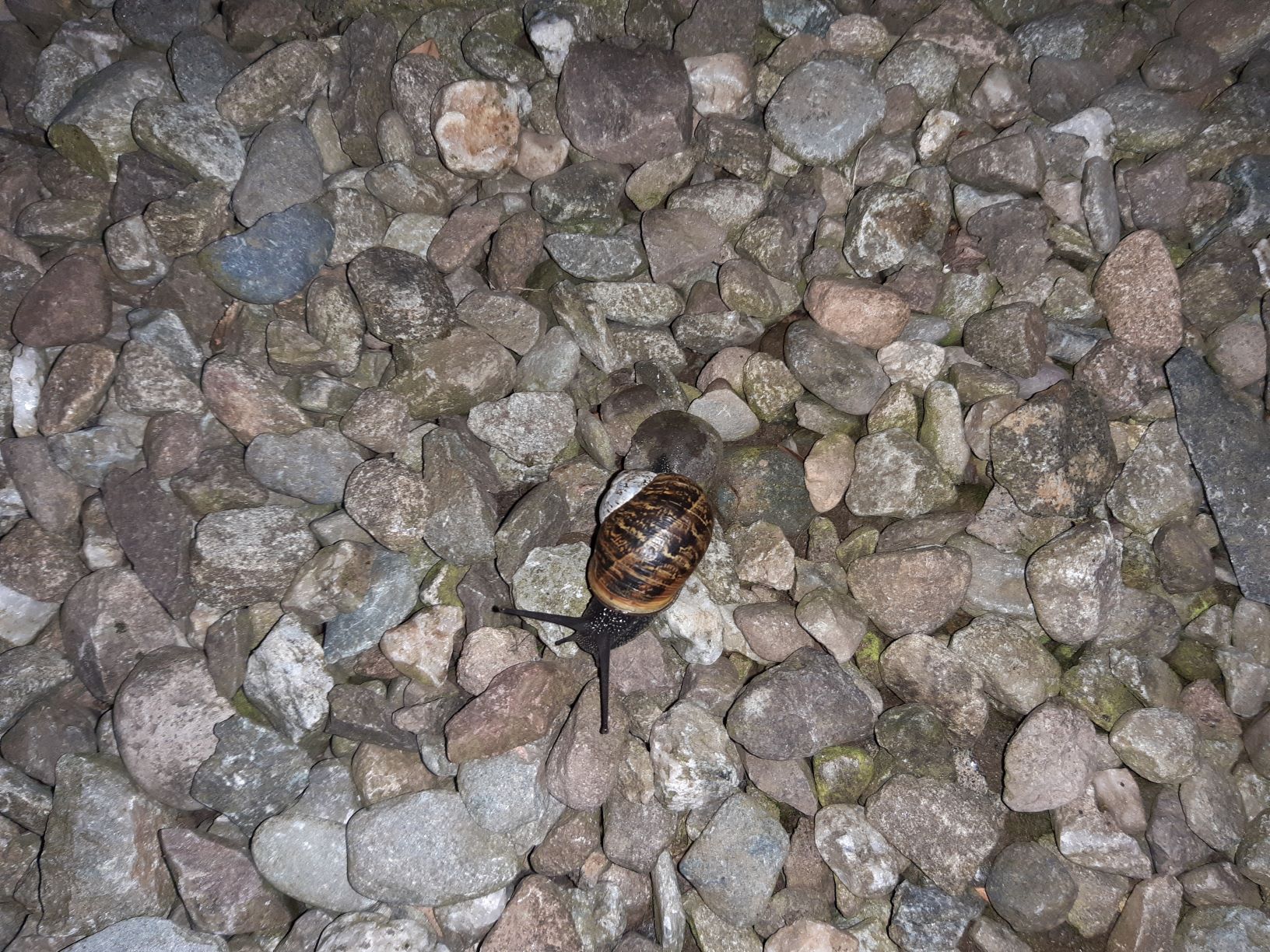 This snail is in the barren desert section of the courtyard, crossing the harsh gravel desert to reach the bounty that is the lawn. Over the years, as the knights died out, the snail population boomed, no longer held back by their natural predators. 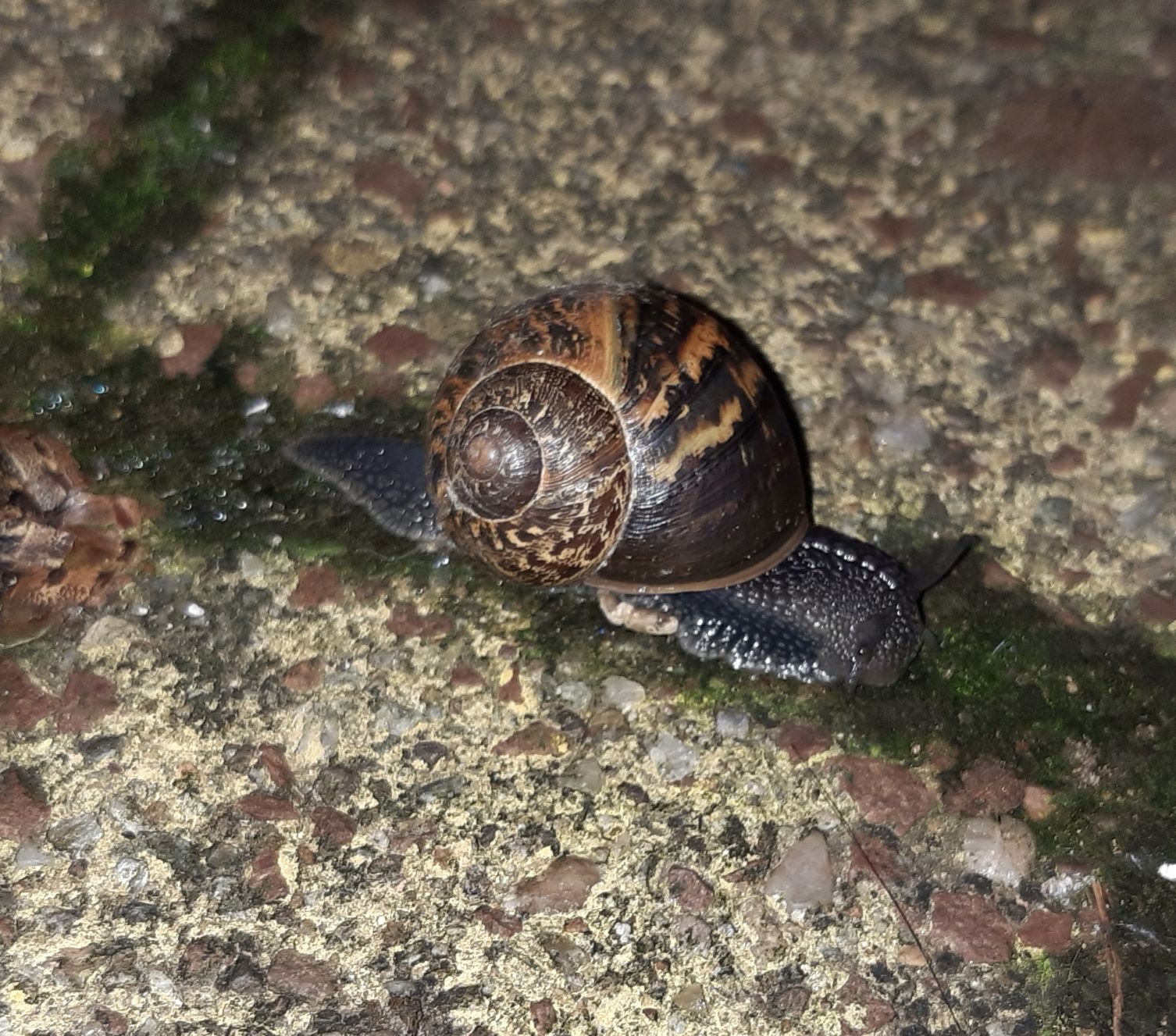 This snail is following a line of moss between the bricks of the walkway. With the downfall of the knights, the monks were left without protection from their ancient foes, leading to a long-running direct war between the Monastic Orders and the snails. 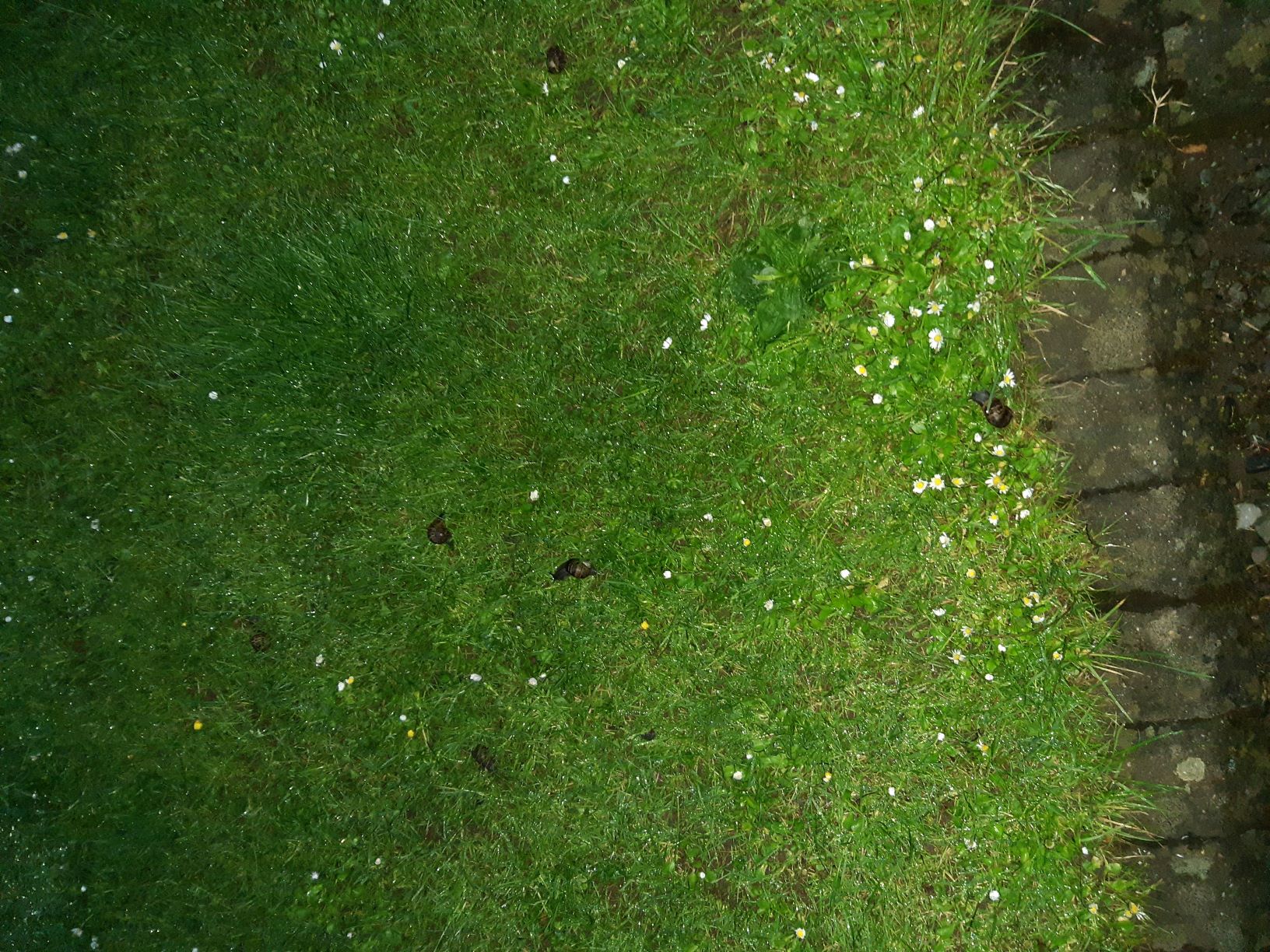 Here are 6 snails in a small patch of the lawn. Not stepping on them has been a challenge. No longer able to rely on the knights for protection, the monks had to take up the fight, leaving them with little time to illuminate manuscripts, which is why we no longer see many such works. 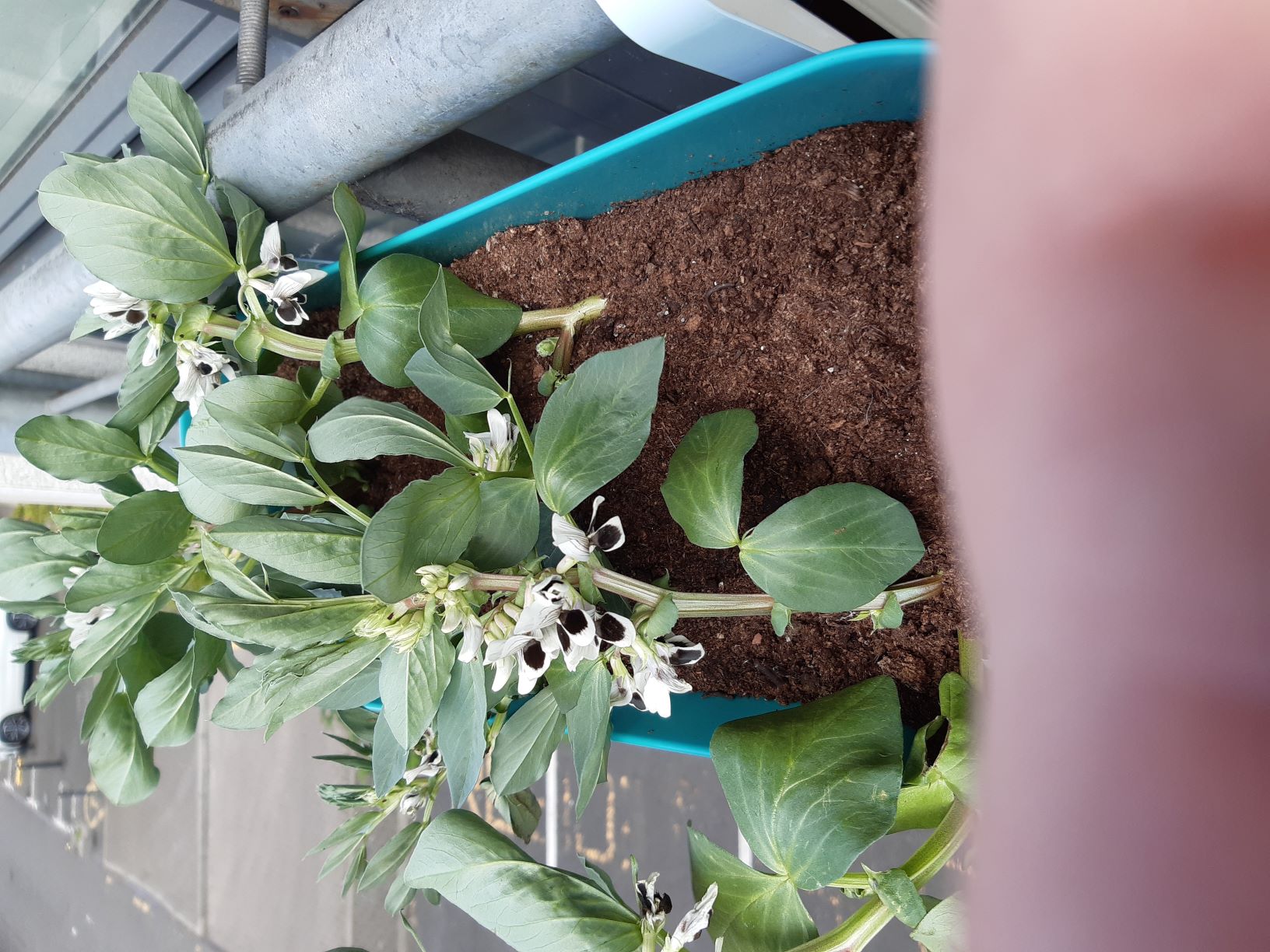 Flowering dwarf broad beans in our window box The snail wars are secret, so it’s hard to know how they’re going. That said, I’ve seen many more snails than monks around here, so it’s safe to say the snails control this region. 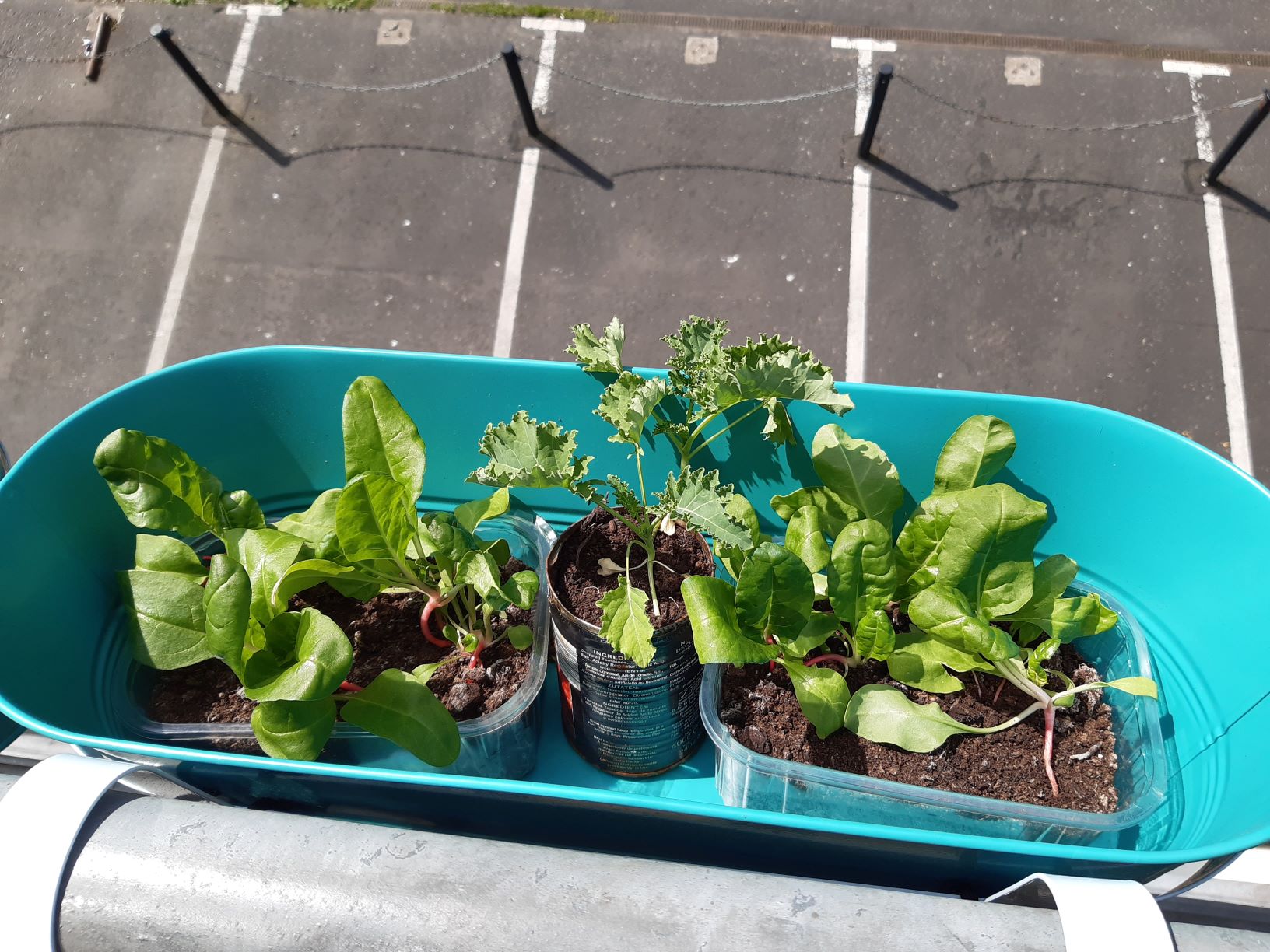 We’re a little short on soil, so the greens are still in the containers we used for the seedlings. With the ground under the snails’ control, we’ve had to elevate our gardening. The window boxes are booked over a sturdy railing, and further secured with parachute cord. It might be overkill, but we don’t have to worry about them falling. 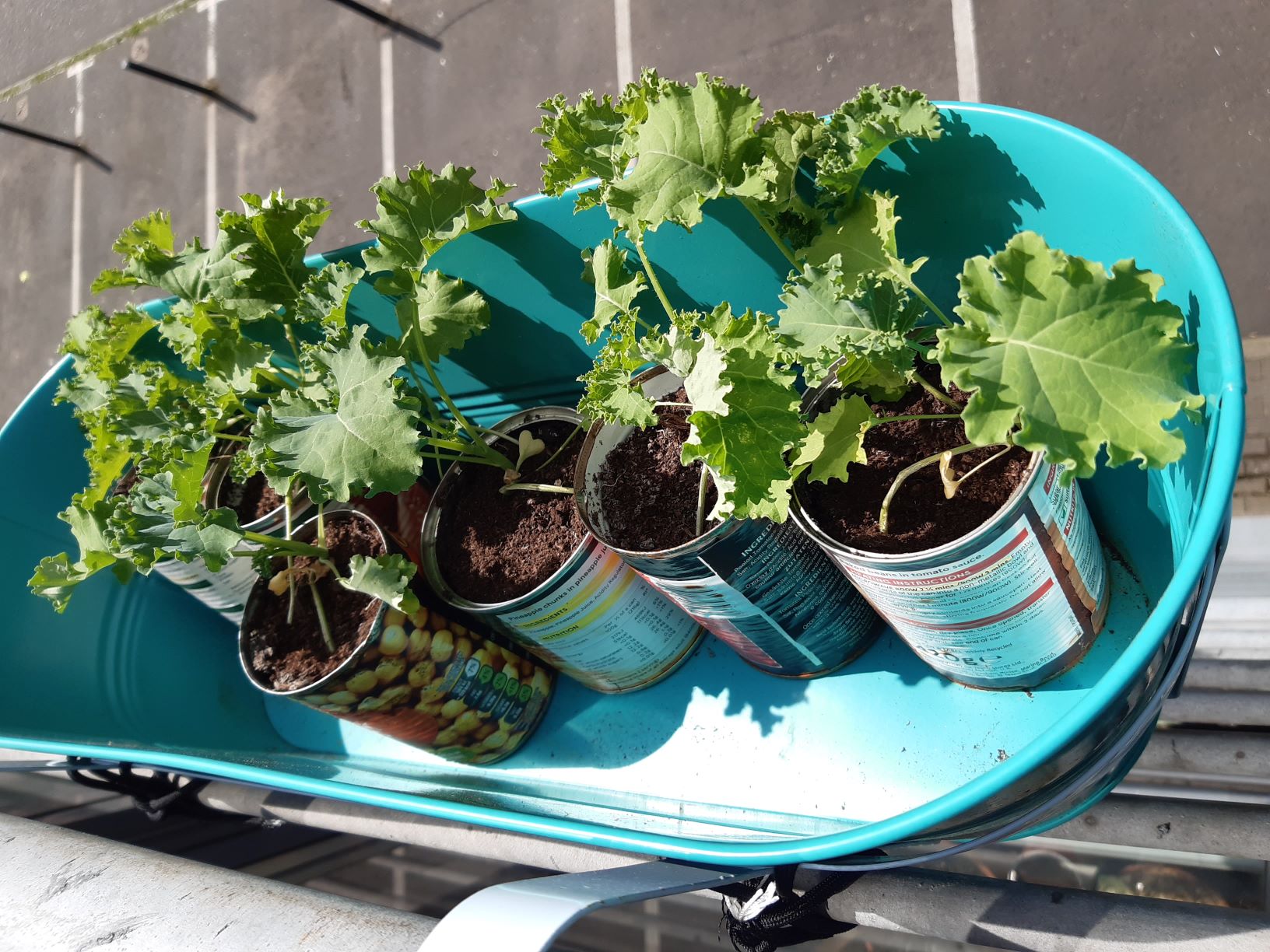 Our kale crop, still a bit stunted by lack of soil. We’ll be able to buy more soon, but in the meantime, they’re doing OK. The snails either don’t know, or are satisfied with controlling the ground.

Unfortunately, life costs money, and my income from this blog has yet to meet minimum wage for the time I put into it. If you can afford to, please consider pledging a couple dollars per month or so through my Patreon. This will help me continue creating and improving this blog by keeping a roof over my head, and food in my carnivorous pets so they don’t eat me. It will also help save my crops from the Molluscoid Menace. Crowdfunding requires a crowd, so if you can pitch in a little, it would help a great deal!

Death of the Author, J.K. Rowling, Orson Scott Card, and Lin-Manuel Miranda » « Capitalism, global warming, and the fear of change