I’m not really a gamer. I don’t own any consoles. It’s been a long, long time since I did. I’m usually pretty okay with that. Life is too big and expansive to fit all its subjects and media and passions into one little brain and lifetime. With some things you just have to accept “okay, I guess I’ll just be mostly oblivious about that particular thingy” or “okay, I guess I’ll just accept this particular gap in my education”.

But every once in awhile, something comes along that makes me think yeah, I really kind of wish I did have a console or two, and was a gamer.

Like the recent release of Street Fighter X Tekken.

Why? Because I could play as Poison, the semi-iconic (and tediously “controversial”) transgender character originally from Final Fight. I could play as a beautiful, femme but totally badass trans woman, and spend all day kicking the will to live out of a series of virtual cisgender assholes. Kick back and harmlessly vent my increasingly pent up rage at a non-virtual world where all too often we’re the ones who get hurt.

The thing is, I love Poison. A lot. She’s awesome. I’ve mentioned her before in the context of Playstation magazine actually issuing a reasonable and sincere apology for the transphobic language they used in reference to her in one of their articles. For me, and for a lot of trans women, she ends up feeling like a symbol of trans female power. She’s not just a sex object. She’s not passive. She’s not a victim. She’s a fighter. She is clearly in possession of herself, and fully confident, and is able to carry herself just fine in a world filled with violent cis folk. If you fuck with her, she will fight back. 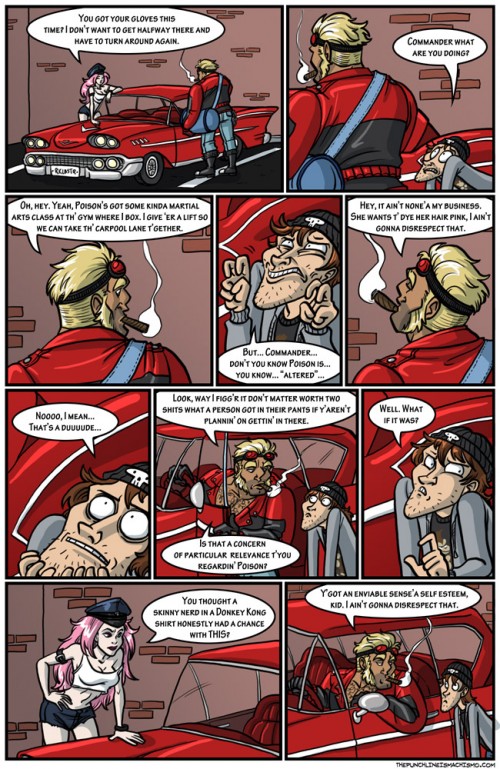 But what really interests me, and speaks to the genuine and real life strength and power of the trans community, is how Poison came about, and came to be understood as such a symbol. She was definitely not originally written to be an icon for trans women (particularly us geeky and/or gamer types). In fact, her origins as being trans at all were very much rooted in transphobia and sexism.

You see, originally, Poison (and her colour-swapped sprite-twin Roxy) were, in the Japanese version of the original Final Fight, just cis women…albeit violent gangster women. But while porting the game to the USA, American censors complained that it was not okay to have your male character beat up women. Solution? Poison and Roxy aren’t “really” women!

Since then, the issue of whether or not Poison is “really” female (ugh) or “just a trap” (ugh-er) has been a “controversy” (ugh-iest) in the fighting game community, with Capcom steadfastly refusing to issue any kind of definitive statement one way or the other…and happily enjoying the free buzz generated by the ambiguity.

But that hasn’t held us back, or left us wondering. We’ve claimed her as our own all the same. Which is what I find so powerful about the whole story.

But first, I want to take a moment to consider another example: Birdo. She’s probably a lot more familiar to most people, given that she comes from the Mario series, which you really don’t need to be a gamer to have a bit of familiarity with.

Birdo was that egg-shooting pink dinosaur-ish monster wearing a bow that you fought as a mini-boss at the ends of stages in Super Mario 2. You know, you had to ride her eggs and then throw them in her face? And that ni-ni-ni-ni-ni-ni-ni-ni music was playing? And afterwards you got some kind of magic orb that would make an owl face nom you into the next level? Yeah.

Well, according to Super Mario 2’s instruction manual, Birdo was “a boy but thinks he’s a girl”.

And thus another transgender videogame icon was born.

In both of these instances, these characters who we’ve proudly embraced as icons were born not out of any deliberate effort to offer us that. They were created instead from the hostile, prejudicial and transphobic attitudes of the 80s- wherein it was morally unacceptable to inflict violence on cis women in a video game but totally cool to inflict violence on trans women, and where we made for funny little insta-punchlines in instruction booklets. “HA-HA thinks he’s a girl! Hilarious!”

It’s things like this that make me annoyed when people knee-jerkedly roll their eyes at the “death of the author” thing. Because you know, sometimes the author is an asshole. Sometimes he needs to be killed. Sometimes what we the audience bring to things is a whole lot better than the author’s stupid intentions.

In a way, it wouldn’t even matter if Capcom came forth tomorrow and issued some big statement saying definitively that Poison is a cisgender woman, with XX chromosomes and a functioning uterus that menstruates seventeen times a day and was born with her hair already pink and pulsates with magical female energy that instantly causes everyone in her immediate vicinity to begin lactating and has never ever so much as looked at any toys other than Barbie and Disney Princesses. Because Poison’s gender doesn’t belong to Capcom anymore, it belongs to us. For us, she’d still be trans, and she’d still be awesome, and she’d still be a way for us to see ourselves reflected in video games. We’d still interpret their idiocy through our own lens of pride, and refuse to allow them to take that away from us.

In fact, that’s more or less exactly what happened with Birdo. Nintendo has made some fairly serious efforts to erase the whole “Birdo is trans” thing and have consistently presented her as nothing but female for a long time now (and have even pretty much canonically placed her as the romantic interest for Yoshi). But the thing is, Nintendo doesn’t quite get it. For starters, Birdo being female and her being trans aren’t mutually exclusive concepts. Nor does her and Yoshi being in love means she’s not trans. As said, she belongs to us now. That genie is not going back into any bottles.

Why do we make that refusal? Why do we create these icons out of circumstances that were anything but supportive of the trans community?

The fact is that no genuine, fully-intentional positive portrayals of trans people are forthcoming in the hyper-cis/heteronormative (and hyper-male-dominated) world of gaming. Where we have any trans-positivity in gaming culture at all, it is either by way of happy accidents (like the Saints Row 2 gender slider in the character customization screen) or by real-world trans people in the gaming community who fight tooth and nail against immense bigotry and hostility but are just so damn talented that they can’t be excluded, like Kayo Satoh. Otherwise it’s a big, intimidating, scary place to be a trans person, with few indications you exist at all, other than perhaps as an insult to be shouted at opponents in online Call of Duty shootouts.

So we build what we need out of what little we have. And we invest it with that need, that yearning and resentment and survivor’s strength. If the gaming community won’t offer us trans icons to be proud of, well fuck them, we’ll take their cissexism and build something positive out of it, everyone else (and their stupid intentions) be damned. Like Poison, we become tough fighters to deal with a hostile world.

And that is something awesome to see. 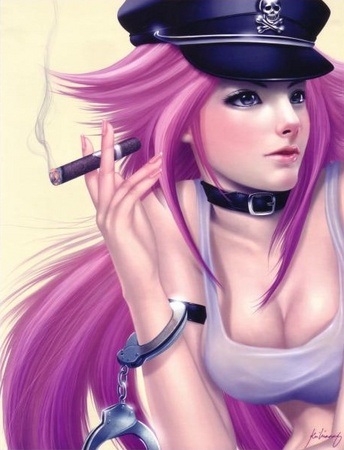 Why I Bother » « On Death, Grief And Skepticism