This post is on the conclusions that epidemiologists have come to after three decades of research: the Joneses are very important.

What a good time to be alive. Except that it is better for some than others—considerably so. Where you stand in the social hierarchy is intimately related to your chances of getting ill, and your length of life.  And the differences between top and bottom are getting bigger, and have been for a generation. [4] 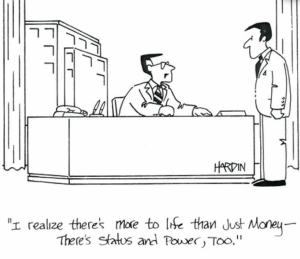 I just finished a book on social status written by an epidemiologist, and I believe it presents the missing evidence that liberals need to use to argue against unbridled capitalism.  Liberals intuitively know that there has to be something wrong with how status is distributed in the world because they can feel either hate for those that have it better or compassion for those that have it worse.

Those emotions are there for a reason and shouldn’t be discounted, but they must be backed up by arguments.  To be sure, there is a corrosive effect to social hierarchies which is the result of unequal distribution in status.  In fact, it is relative status and not absolute status that matters to people’s health and happiness.  Although I’ve hinted at this, I was ignorant of the research [4].

In other words, I will be more healthy and happy if I have more status than the Joneses do.  Status is much more than just income, education, and possessions as it is also valuable attributes such as beauty, smarts, likability, knowledge, and talent.  We compete to bestow value on one another with these attributes and those that have more of it relative to others have more control and influence.

When we talk about absolute status, then we are not concerned with how the status of others affects us or vice versa.  One of the arguments for capitalism is that it brings people out of poverty, but it doesn’t matter much because it’s all relative.  In fact, researchers were perplexed as to why households that made more than enough to be healthy and happy still had a higher risk of death compared to other households that had a slightly higher income and education level.  Education and income, however, can only help with so many good decisions and can only provide so much superior health care because of the law of diminishing returns.

Then what else is causing the unequal health and happiness measurements amongst families that otherwise have enough income and education?  It is what we all know and think; it matters how and where we are positioned relative to others.  This should create tension to any ideology although some would settle for “tough luck” to the bottom feeders.  But even that isn’t accurate because it is a health gradient that where anyone on the status continuum is positioned lower than another, all else equal, they will be worse off.  When we understand status as being on a continuum, it makes the categories of rich versus poor meaningless.

So how does status work to help our health and happiness?  At the very least, we know that income and education help us to maintain a certain level of status that prevents absolute deprivation, which is starvation, dysentery, and malaria—anything associated with poverty.  But I explained above that absolute status that is associated with education and income can’t explain why anyone on the status continuum will be worse off than anyone that is above them all else equal.  To understand why it matters what others have relative to us as well as how it affects us, we must first understand the two measurements of health and happiness.

The health metric can measure the amount of heart disease, diabetes, and mental illness within a given population, which are no longer thought to be “rich-man” diseases but due to how the status of others affects us.  Of course, getting mental illness and heart disease involves other factors as well such as genetics and access to health care.  This post explains that once we correct for those things (i), why is there still a health and happiness gradient amongst people of differing status after an absolute threshold is met.

The answer that is given by the author is that the degree of control and participation that we have in society is directly related to how we are positioned relative to others.  The more autonomous and free that we are, then the more control we have in our lives.  Think about how free we are at the workplace where management on a whim can make us feel fear of losing our positions.  It is anxiety and rumination that directly taxes the mind to produce a stress reaction that makes us more susceptible to heart disease and mental illness.  It is that last line that so much recent research has been devoted to and that I will focus on in the next post.

i) The data on the next post shows that these things aren’t corrected to predict how relative status affects our risk for death.  It does, however, correct for age, family size, sex, and race.

[2]  Gilbert, Paul.  Subordination and Defeat: An Evolutionary Approach To Mood Disorders and Their Therapy. Taylor and Francis.