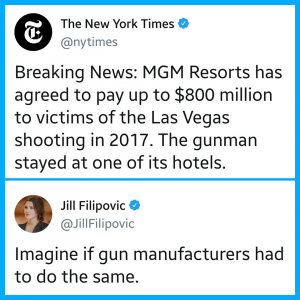 The difference is that the hotel didn’t imagine or expect their property to be used for such a crime. The gun companies did, and kept selling them.  How is the hotel responsible but not the arms dealers and stores that sold the weapons?

MGM Resorts International has agreed to pay up to $800 million to settle thousands of liability claims stemming from the 2017 mass shooting in Las Vegas, lawyers announced Thursday, almost exactly two years after the massacre.

On Oct. 1, 2017, a gunman on the 32nd floor of the MGM-owned Mandalay Bay resort opened fire on a crowd of people at a country music festival, killing 58 and injuring hundreds.

Lawyers representing survivors and victims wanted MGM held liable for negligence because the shooter was able to enter the hotel with luggage that held an arsenal of high-powered, assault-style weapons and thousands of rounds of ammunition.

Football Sucks: Another year, and it takes less than a month to prove it » « Reputation Earned: Joe Clark’s was the last conservative government Canada ever had