I’ve just got the first 8 days. I’m not going to put a proper visual caption on these. They’re OK for a bit of visual distraction if you can see, but they just aren’t worth the effort to describe. It’s so much digital ephemera. For this (my first) Inktober, I’m combining the Monsters & Mythology prompts plus the Official Prompts.

Going with the spirit of Inktober I didn’t allow myself much digital work. For example, I allowed myself no additional strokes or distortion / warping. I don’t have every color in the universe, pen-wise, so I did allow myself subtle use of adjusting contrast, hue, saturation, brightness.

You can still tell I did the under-drawing for all of these with a yellow sharpie, so I couldn’t erase it. I think that kinda stuff looks fun in a drawing but I know some people hate it, so sorry about that.

Allow me to use this opportunity to call out the official Inktober writers for being cheesy bastids, turning the phrase “roasted chicken“ into two separate prompts and using another to complain this job makes them “exhausted.” Proceeding thus, 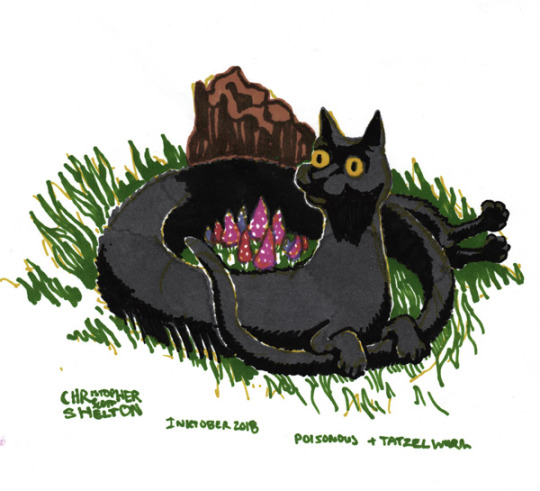 This is “Tatzelwurm” + “Poisonous.” This is inspired by my cat Hecubus. He’s a long boy. 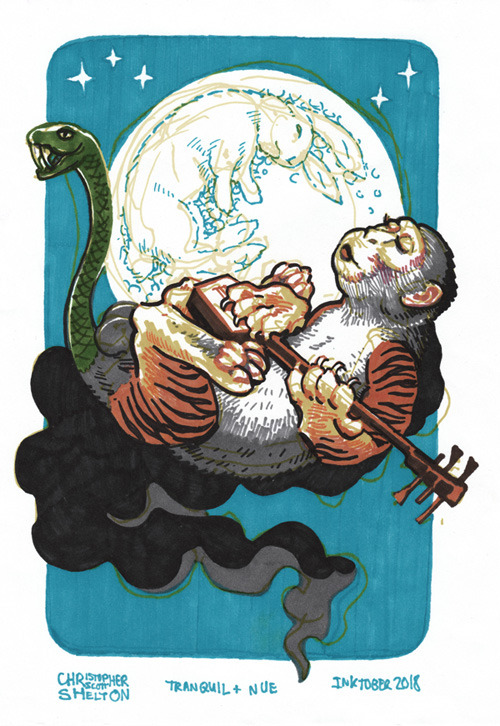 This is “Nue” + “Tranquil.” Possibly NSFW for tanuki balls. Hey, I had to show the nue has a tanuki torso somehow. The nue is supposed to make noises so scary it makes you fall ill. My notion is that to the nue and friends, those sounds are actually nice. 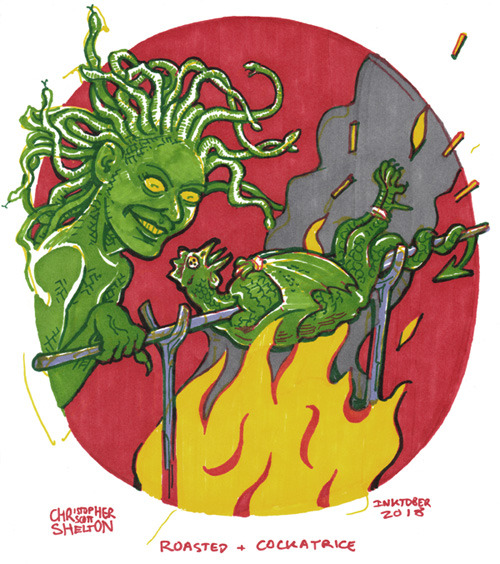 This is “Cockatrice” + “Roasted.” Possibly triggery for cruelty to cockatrices. It takes a lady who can kill with her eyes to cook a bird that can kill with its own. 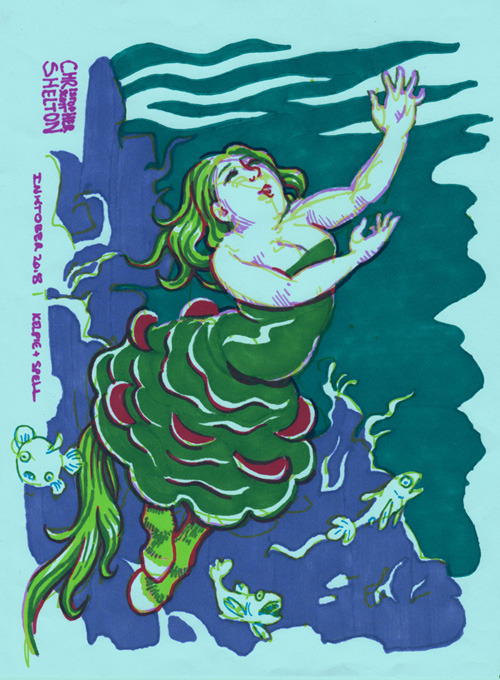 This is “Kelpie” + “Spell.” She’s getting someone under her spell, if that’s not apparent enough. 😛 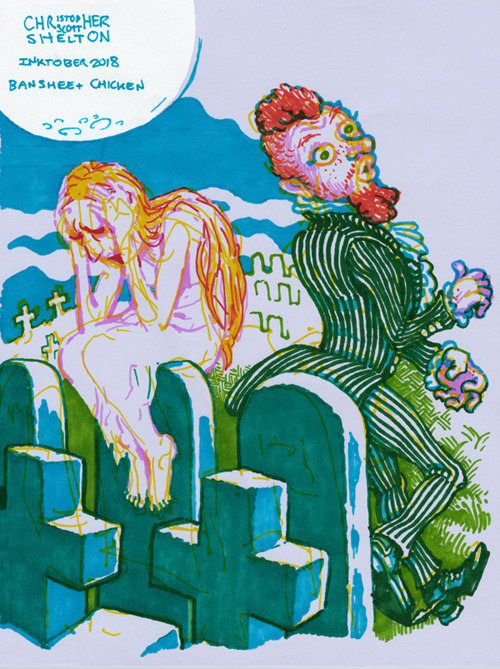 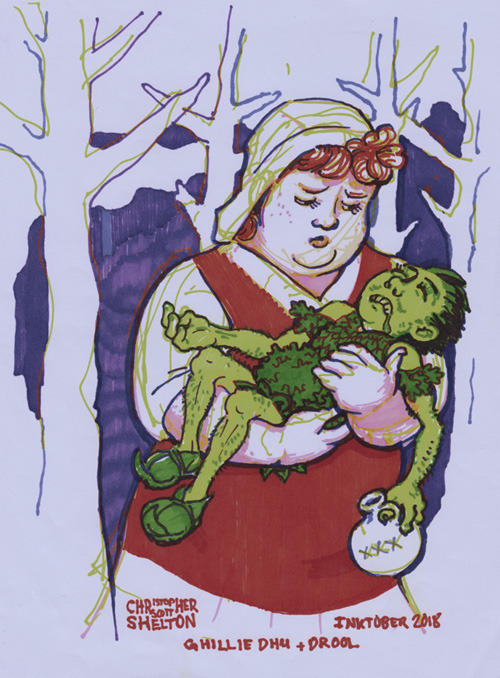 This is “Ghillie Dhu” + “Drool.” The ghillie dhu usually helps a lost young maiden find her way home. This one got tore back, requiring some role reversal. 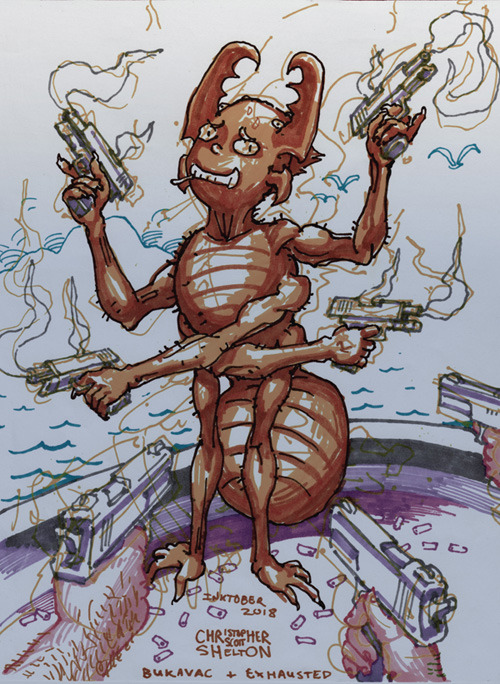 This is “Bukavac” + “Exhausted.” The bukavac is yet another spirit that drowns people, but is a little weirder than the usual horse, maiden, or geezer. This one has exhausted his ammunition. Oops. In other things, this is my least favorite I’ve done yet. I’m just including it for completeness. 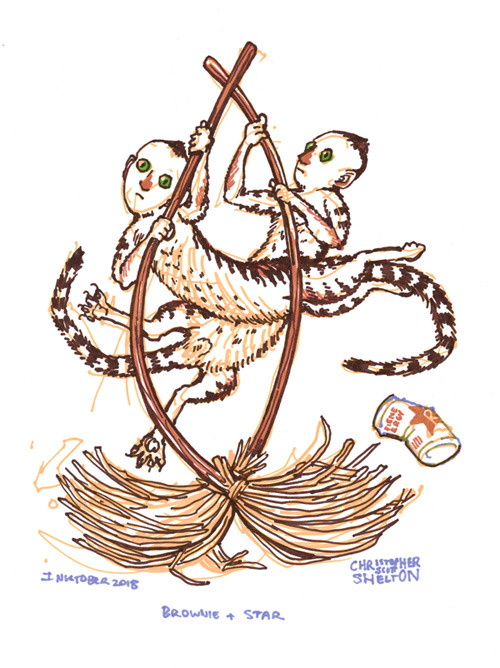 This is “Brownie” + “Star.” This is one brownie that had a star-themed energy beverage and is going berserk on the broom.

I liked this one well, and it’s special to me because the brownie is inspired by my late cat Mochi. He was a brown tabby and I used to call him “Brownie.” When he was healthy enough to run around I’d say he was a “Brownie-in-Motion,” a play on Brownian motion.