Most of you probably know that in addition to the handful of other things I do in my life, I work full-time as a health economic researcher. I have a job. I work at this job because it’s a necessary thing for me to have the kind of lifestyle I want, and I have been given the antecedents to the opportunity to get a job like this (a stable home environment, a consistent parental focus on education, abundant encouragement from mentors, good health, a great deal of luck, the list goes on). On most days I like my job, although getting my ass out the door at 6:30 am every morning is not exactly ideal.

I have a boss. I like my boss a lot. He gives me a fairly free hand to do work on my own schedule, and is there as a resource if I need guidance or feedback. Part and parcel with this sort of laissez-faire approach is that, while I don’t get micromanaged, I also don’t get noted for every time I don’t screw up. I can sure as hell expect feedback if I do something wrong, but on a day-to-day basis I know that I am the only one looking over my shoulder to make sure I’m staying on track and doing things properly. If I screw up and don’t fix my mistakes, I get fired.

Most of you probably know that in addition to the other handful of labels I apply to myself, I consider myself a feminist. I have detailed the reasons for this countless times before, but suffice it to say that I recognize the same forces of oppression and selective perspective at work in white supremacy that I do in misogyny. The similarities between the two make recognizing one without recognizing the other nearly impossible. Insofar as being identified and self-identifying as male precludes me from directly experiencing the most virulent and visceral forms of misogyny, it would not be inaccurate to call me a “feminist ally”*.

The scope, depth, and vigour of my feminism is entirely within my own hands. Like my job, there is nobody who bestows hugs and cookies on me every time I do the bare minimum of recognizing gender equality. 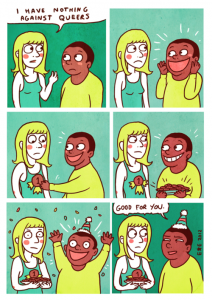 In fact, the only time I ever expect to hear about my feminism from those with whom I express allegiance is when I fail to live up to it. To be sure, when I go out of my way to fight on behalf of feminist principles I may receive some plaudits from people who appreciate my taking a stand – it is always nice to know that my efforts are appreciated. That being said, there has never been a circumstance where I felt some sort of resentful entitlement to recognition and praise for simply acting as though (or worse, simply holding it in my head that) I believe men and women are fundamentally equal.

That’s because I realize that being an ally isn’t something that I am by virtue of agreement with an idea – it’s something I do. It’s a job I have. I can do a good job and stand up for these principles, or I can do a bad job and say things that come from an unthinking perspective. I can even do a slacker’s job and let other people do all the fighting, quietly agreeing with them but refusing to sully myself by taking a side. Hell, I can even believe in a feminist position but chastise “both sides” for being unnecessarily “uncivil” in their disagreement.

In only one of those circumstances am I being an ally. In all the others I am doing something else entirely.

There are folks who have, at various times, sought to turn this argument into a “with us or against us” thing. They whine to me about “divisiveness” or being “confrontational” or “angry”, and make vague hand-waving assertions about this argument’s resemblance to a foreign policy doctrine by a certain former US President. But this isn’t and never has been a “with me or against me” thing. You’re either with me, or you’re not with me. But if you’re not with me, you’re not an ally of mine. You can call yourself an ally, you can claim to share my position when it comes to gender equality, racial equality, or freedom of/from religion, but unless you are fighting alongside me, you can’t expect me to see that label as anything other than rank and deluded self-flattery. Being an ally, like most jobs, is a long and gruelling task that is often thankless, and where the only time your efforts are noticed is when you screw up. The personal reward that you take away for your efforts is not the warm approval and deferential awe of those you’re staunchly defending. It certainly isn’t a “get out of oppression free” card for the next time you screw up. Anyone who thinks that it’s sexual favours needs to STFU and GTFO.

The truth about being a true ally of any social justice movement, be it feminism or anti-racism or atheism, is that your only reward is the better world that your struggle helped to create. Allies from outside the directly-impacted group are crucial, but their motives need to be sincere. They (we) are needed because their very existence disproves one of the central claims made by detractors: that the movement is about self-interest rather than principle. The best ally you could be is one who listens when in the presence of those you seek to work with, and who is unrestrainedly loud in hir defense of the position when surrounded by hir fellows.

But if the only time you’re doing any fighting is against the people pointing out how you’re failing to be an ally, well then you’re the worst ally imaginable.

*I hasten to note that one can be a male feminist. I would go further and say that men who agree with the tenets of feminism ought to be as vocal as possible in such self-identification.

“Misogynist” is NOT “the new nigger” » « Settling in, Leftist Identity Politics, and Ideological Purity