There have been few times in my life where I have had a single-race group of friends. Living when and where I have, there have even been few examples where I was the only person of colour (PoC) in my immediate social circle. Part of it came, to be sure, from the fact that my high school was ludicrously multicultural, and I went to university for the next 6 years of my life before moving to Vancouver, a city with a huge PoC population. Simple probability theory dictates that you can’t really put together a monoracial group without more than a little bit of intentionality behind your friend selection.

Which is why shows like Seinfeld, Friends, and How I Met Your Mother annoy the living shit out of me. Well, to be fair to HIMYM, they eventually cast Kal Penn, so now the only thing that annoys me is the terrible writing. Anyway, these shows somehow manage to be about a group of white people living in one of the most multicultural cities in the world who only have ny kind of meaningful contact with other white people. Sure, PoCs occasionally pop into existence on these shows, but it’s almost always as either one-off characters or as “hilarious” jokes based on stereotype.

Last week I invited you to think about privilege as a pair of coloured goggles that prevented you from being able to see certain parts of the spectrum. Of course, if it were simply the case that privilege caused you to ‘miss out’ on things, it wouldn’t be much of a privilege, would it? Here’s the thing – that kind of selective blindness has consequences:

The authors look at previous research in the area of self-esteem, and note the fact that there is a relationship between self-esteem (particularly body shape satisfaction) and the amount of television watched. This relationship is likely to be exaggerated in girls and black children, as media analysis suggests that the portrayal of these groups is less than flattering (when compared to for white boys)*. Furthermore, there may be an effect on global self-esteem due to differences in gender and race role portrayal. The authors ask the following research questions:

If it is the case that television viewing provides skewed socially normative models for gender and race (skewed towards white men), then we should see two things: 1) an inverse relationship between television viewing and self-esteem will be viewed in the population at large (i.e., if you watch more TV, your self-esteem goes down), particularly in girls and black children; and 2) this effect will persist even when controlling for body shape (i.e., it’s the role, not just the appearance that makes a difference).

Panels of elementary school children were asked to answer questions about their television watching habits. The panelists were also asked to complete global self-esteem scales and scales that explicitly measure body satisfaction (i.e., how you think you look vs. how you wish you looked). Body satisfaction was used as a control variable, to ensure that the investigation could determine changes in global self-esteem from the already-known effect that television watching has on perceived body shape esteem. These tests were conducted at two different time points to observe change over time. 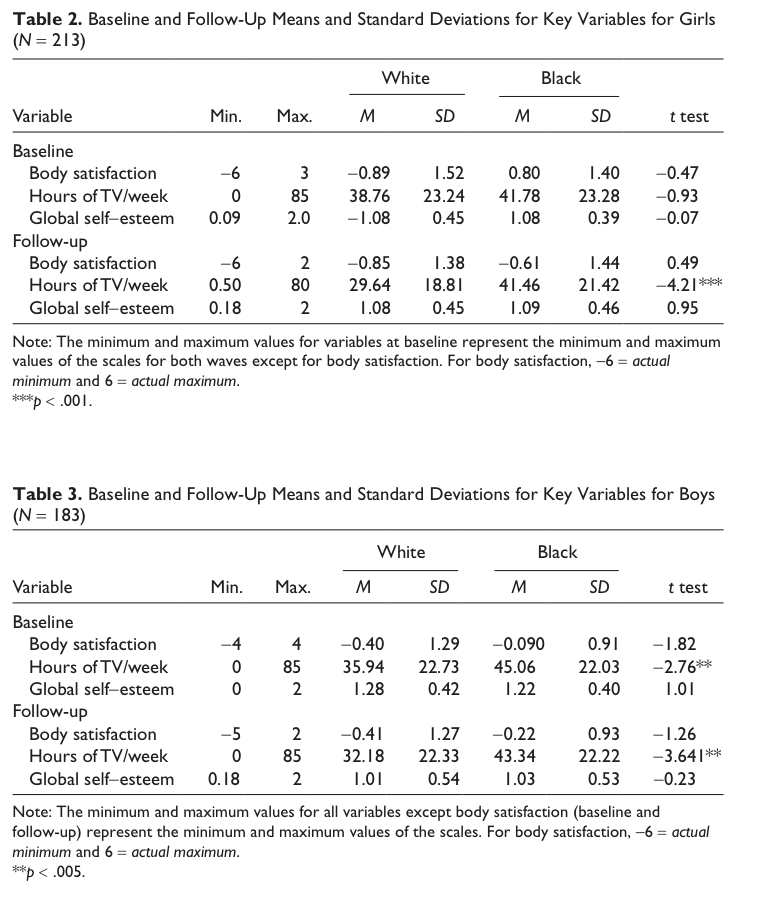 We can see from the above table that there are racial differences in the study variables observed between boys (white boys watched significantly less television at the second observation point) and girls (black girls watched more TV at both time points). There was no significant racial difference in self-esteem or body shape esteem.

However, that’s not the end of the story. The authors constructed a linear regression model to observe the effect that television has on self-esteem when controlling for age, race, and body esteem (and various interactions thereof). The results were, depending on your perspective, either shocking or shockingly predictable: 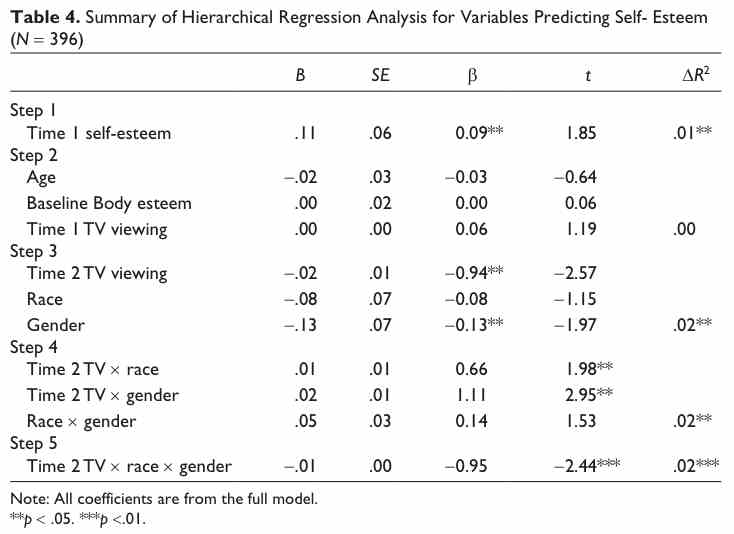 We can see from the above table (kind of – I’m not exactly wild about the arcane way these results were presented) that there is a relationship between race, gender, and television watching. I’ll break it down the way the authors do:

The rightmost column (ΔD2) shows how much more of the variance is explained by the addition of new variables into the model (it’s perhaps easiest to think of this as how ‘strong’ the model is at ‘predicting’ the independent variable – self-esteem in this case). As you can see, controlling for race and gender isn’t exactly the ‘silver bullet’ of self-esteem prediction, but the associations are statistically significant.

The authors give an explanation, grounded in the literature, of the mechanism by which increased television viewing may vary self-esteem among gender and racial groupings. They posit that the way different groups are portrayed on television plays a role in how children come to see themselves. Given that the majority of television characters are white men (given positions of high status with a frequency that is disproportionate to statistical reality), and that women and characters of colour are usually either absent or play very stereotyped roles, the authors suggest that repeated and ongoing exposure to television gives children a distorted view of their own place in society, and in so doing warps their sense of self-worth.

The authors note my main misgiving about this study – there was no attempt made to determine the type of television that the children watch. It is certainly not inconceivable that kids don’t all watch the same shows – that boys differ from girls, and black children differ from white children in their show preference. As a result, there is no way to directly test their proposed mechanism.

The other variable that is unmeasured is the presence or absence of adult supervision or control over television watching. A kid may, for example, watch a lot more TV because their parents work all the time – this would mean less time spent talking about what ze saw on hir favourite shows, which may moderate the effect that those shows have vis a vis self-esteem. It wouldn’t surprise me to learn that parental availability differs along racial lines (and perhaps gender lines too).

Regardless of these weaknesses, it’s an interesting study that may serve to demonstrate that the messages we receive from our connection to popular culture are very different depending on what else is going on behind the eyes watching the tube.

*To hopefully forestall the predictable objection, the authors do in fact note that media portrayal of white men does present white boys with a distorted self-image. This also has an effect on their self-esteem. The size of the effect, however, is much smaller than for girls and for black boys.

Because I am an atheist: Rebecca Watson » « Religion of peace