Today’s contribution comes from a Twitter conversation I had with Rebecca Watson, who took a decidedly minimalist approach to her response:

Because I am an atheist… 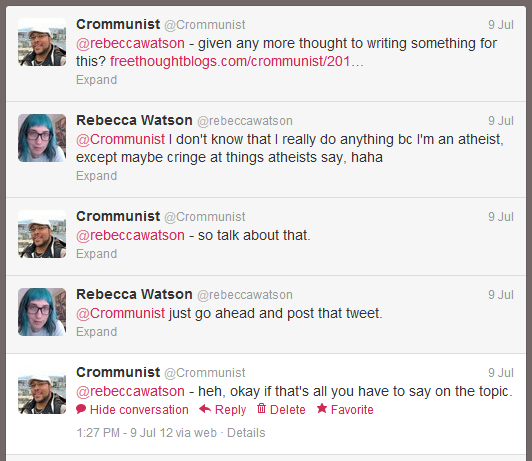 Rebecca: “I don’t know that I really do anything bc I’m an atheist, except maybe cringe at the things atheists say, haha”

I have been intentionally selecting the responses from people who have been saying that their atheism makes a big difference in their lives, but there is a large contingent of the atheist population whose atheism simply does not play a meaningful role in their decision-making. While the way I framed this issue does presuppose that a lack of god belief is something that makes you do things, the fact is that many people simply do not see it that way. A response of “nothing” is an entirely valid way of answering the question of “what does your atheism change about your life?”

Consider submitting your own statement, by e-mail or as a comment!