And here’s another one on the same theme. How women who play badminton really ought to do it in a skirt because…well you know.

What was that I was just saying about beauty pageants for little girls and hyper-sexualization of girls and women and the way that plays out in gymnastics and ballet and ice skating where men usually wear clothes while women always wear bathing suit equivalents? 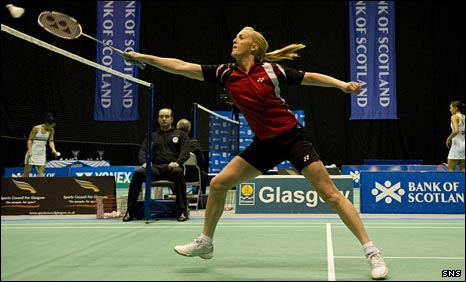 The BWF has received feedback from various parties with regards to the introduction of Rule 19.2 of the General Competition Regulations which require female players to wear skirts or dresses for Level 1 to 3 tournaments. This specific regulation has its genesis in the extensive review into the marketing and events structure conducted by an external international marketing agency in 2009.

Well why stop there then – if it’s a matter of marketing, why not make a new rule saying women have to wear makeup and long flowing hair and V-neck halter tops and stiletto heels along with their skirts? Why not tell them to stop playing and do a pole dance instead?

The BWF has developed guidelines to go alongside the new Regulation, to ensure that it will not in any way discriminate against any religious or other beliefs and respects women. Players will continue to wear shorts if they wish but simply wear a skirt over the top of the shorts, as is often practiced already by some players.

Deputy president of the WBF Paisan Rangsikitpho says it’s “never been the intention of the BWF to portray women as sexual objects,” it’s just that they’re trying to get more people to pay attention to badminton and they figure this is the way to do it.