The first two issues of The Atheist comic:

The covers are cool enough, but the story is kind of neat:

When your fears are beyond belief you need a hero beyond believing. Antoine Sharpe is a scalpel on two legs – skeptical, brilliant, ruthless. A special agent with a shadowy department of the U.S. government, Sharpe applies his unconventional intellect to any paranormal threats that arise. His mission: Debunk or destroy. When countless teenagers show signs of otherworldly possession, Sharpe and his partner must not only find the truth, but stop the apparent plague from destroying civilization itself. How far will Sharpe go to save humanity? Farther than you can imagine! This trade paperback collects the hard-to-find, critically acclaimed mini-series, featuring the complete first story-arc of comic superstar Phil Hester’s enigmatic, intellectual government agent.

Unfortunately it’s an old comic and there are only two additional issues. I kind of want to get my hands on them. At the very least they’d make some badass artwork for my new apartment.

Thanks, Ryan, for the great gift!

I love OkTrends. If I owned a dating site, I too would view it as hundreds of thousands of data points ready to be analyzed in amusing ways. In their newest article, they looked at the correlation between religiosity and writing proficiency, as measured by the Coleman-Liau Index.

Hm, interesting indeed. Or as they quipped, “Is there a Comic Sans version of the Bible?”

But even more interesting is when you break it down by how serious users report their belief to be:

And those not serious Buddhists? Totally non-theists who just want something more fancy and enlightened to call themselves. Who doesn’t know one of those types of college Buddhists?

Now, let’s remember that correlation does not imply causation. Poor writing skills don’t necessarily make you religious (poor reading skills, maybe). Religiosity doesn’t necessarily make you a poor writer (unless you worship the LOLCat Bible). If I had to propose a hypothesis, it’s likely intelligence is one of the determining factors for both religiosity and writing ability.

Of course, this is the blog from a dating site, not a peer reviewed scientific study, so take it with a grain of salt. Still interesting, though.

I personally wouldn’t get a tattoo, but I can appreciate a good one – especially if they’re nerdy. Here are some of the best biology themed tattoos (most from here):

The tree of life: 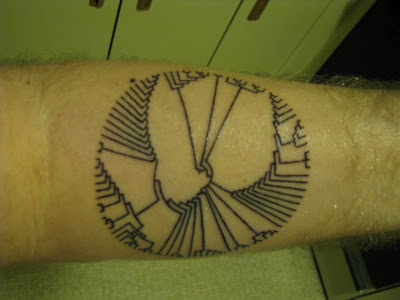 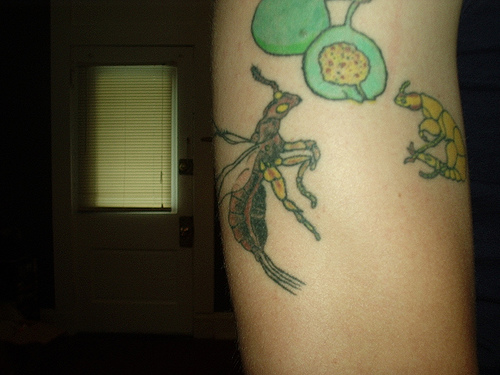 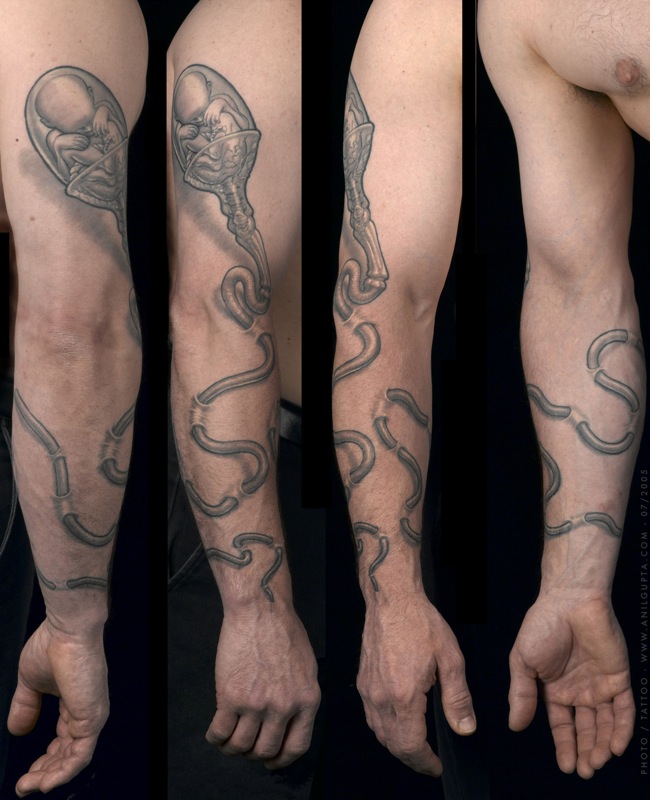 This is post 40 of 49 of Blogathon. Pledge a donation to the Secular Student Alliance here.

In less than 24 hours I’ll be sitting in Las Vegas with a hoard of skeptics and heathens! Needless to say, I’m super excited for TAM8. I haven’t been sleeping well the last two nights because I keep thinking of all the awesome things that are about to go down.

But don’t worry, I’m not just going to abandon you guys. Again, I have some posts set up for the days I’ll be gone. Don’t expect any posts from TAM while I’m there, though. Wifi in the conference room is $25 an hour, and $12 a night for our hotel room, soooo…uh, yeah, no internet for me (I don’t have an iPhone either). But I will be tweeting like crazy, so keep checking my twitter page.

And for those of you who are also going…say hello! I’ll admit I get a little social anxiety when I’m in big crowds, and I’m more comfortable with people approaching me than me approaching people. So if you don’t say hi, I’m probably going to go lurk in a corner and stare at various celebrities in total fear. Except for if I’ve had a couple of drinks in me – so expect my anxiety to be obliterated at all the social functions.

Oh, yeah, and I’m speaking on Sunday. Bright and early at 8:45am on Skepticism, Humor, and Going Viral: What We Can Learn from Boobquake. Considering the Skepchick Bordello party is the night before and rides back don’t start until 1am…yeah, I’m doomed. If anyone comes despite their horrible hangover and sleep deprivation, I’ll greatly appreciate it!

Now, I still have to go pack up my entire apartment since I’m moving back to my parents’ house the day after I get back…and my lab is having a going away dinner for me tonight. Busy busy!

This was my second year going to Evolution 2010, the join meeting of the Society for the Study of Evolution (SSE), the Society of Systematic Biologists (SSB), and the American Society of Naturalists (ASN). Last year I went as part of the Undergraduate Diversity program (which funded my way!) and had a blast.

This year was just as good. My talk was on the first day of the conference, which was awesome. I only had to spend that morning fretting, and I got to enjoy the rest of the conference stress-free (unlike most of my labmates). My presentation went alright – Prof said I did a good job, but I think I could have been a little smoother. I was surprised that I still had a good number of people in attendance, even though I was speaking at the same exact time as the end of the USA World Cup match. Yes, annoying vuvuzela sounds filled the conference hall.

As for the talks themselves, I went to a lot of interesting ones. Well, the first day started off a little shaky, but the conference improved once I started going to research talks. One of the bad things about the conference was that there were just so many talks – 12 concurrent sessions to choose from! You never know what talk is going to be good, so I know I missed some great ones just by choosing poorly.

The downside of going as a post-bach (I’m in undergrad/grad student limbo!) is that most of the stuff is still way over my head. Almost all of the talks are given by professors, post-docs, or nearly finished graduate students, so no matter how much of a nerdy brainiac I am, I was still way out of my league. So, sorry, no talk re-caps for you. Though Wired did cover one talk that I thought was super cool (and actually understood!), so check it out: Lizard Camouflage Confuses Males About Gender. Pssssssshhhh, Wired covered that but not my copulatory plug talk?

Some amusing things about the conference:

Some amusing things about goofing off in Portland:

I’m sure I’m forgetting some craziness, but that’s all I can remember right now. It was a lot of fun, and hopefully I can go back to Evolution and Portland in the future.

Which Ninja turtle do you prefer?

Donatello, of course! How could the scientist not be my favorite? I’d always choose him in the Teenage Mutant Ninja Turles video game for NES. I still remember how accomplished my friend and I felt if we made it to the skateboard level (we were in 1st grade, cut us some slack).

And just to prove my TMNT/art geekiness, I own this shirt:

So I hear we shall see Harry Potter nude in the next movie…could be wrong. The perv in me so wants to tho ;D

Hm, I’m torn. On one hand, I was never a fan of Harry in the books. He annoyed the living crap out of me. Pretty much all of his characteristics were the antithesis of traits I look for in a guy, so I never understood the Harry fangirling. On the other hand, I’m always for gratuitous male nudity, especially within my geeky fandoms. That and I like Daniel Radcliffe – he seems intelligent, witty, and humble. You know, traits that actually are attractive to me.

Now if someone invents a time machine and we get a Younger Alan Rickman nude scene, then I’ll join you in flailing.

WILL YOU SHOW ME YOUR POKEYMANZ!?

I’ll show you something even better: 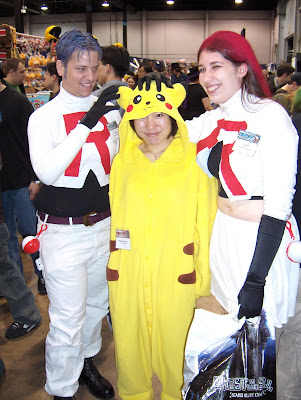 Ah, the bad decisions we made at age 17. As a funny side note, we had no idea who that person in the Pikachu suit was.

Why is Twitter so addictive and appealing? It seems the answer may be more scientific than one would have guessed. An experiment by an industrious blogger has found that sending a tweet increases oxytocin and decreases stress hormone levels in the brain. This is similar to the reaction a person has when being in love.

I would love to see this investigated on a larger scale. Is this guy an anomoly, or is this a common experience for tweeters? How does reading other tweets affect us? Are the effects magnified when someone replies to us? Are the thousands of tweets I’ve sent in the last year considered drug abuse?

Hop to it, NIH! Fund this essential research.

Here’s a pin-up calendar I can support due to the pure biological geekiness:

Exciting breaking news, everybody! This is a monumental step for female scientists everywhere. I just found out that we have the first female professor in a scientific field long dominated by men. I’d like to introduce Professor Araragi…

Yes, I’m excited for Pokemon Black & White to be released. Don’t judge me for hanging on to a piece of my childhood – the games are addictive and fun! I did geek out about the Professor being a woman, though. Hey, when popular culture starts recognizing that scientists can be female – especially an attractive female instead of a frumpy stereotype – that’s a step in the right direction.

The multi day internet event, broadcast live online, attracts an audience from around the world to watch as the team plays through twenty five years of Super Mario Brothers video games.

This is a fantastic, fun way to raise money for charity. Plus, they’re based in Lafayette, IN! I actually met one of the players when they came out to our Boobquake rally to show their support. Check out their site to donate, and make sure to tune in on the 25th!