On Friday I drove down to Portland for the Mensa Annual Gathering, a conference of nearly 2,000 Mensans. I was invited by the Mensa Atheists group (thanks Darlene!) to give a talk on my visit to the Creation Museum.

I’m not going to lie – I had no idea what to expect speaking for Mensa. I had been warned – by Mensans – that they tend to be quite the eclectic, eccentric bunch. But as a nerd who’s visited her fair share of atheist/skeptical/biology/anime conventions, it wasn’t too odd for me. In fact, it reminded me a lot of my experience at TAM – being surrounded by really bright people, remarking on the occasional odd personality that makes the night more interesting, and skipping talks to go drink alcohol instead.

But there were certain instances of nerdery that really stood out. For example, walking through the hallway and finding a Star Wars photo op: 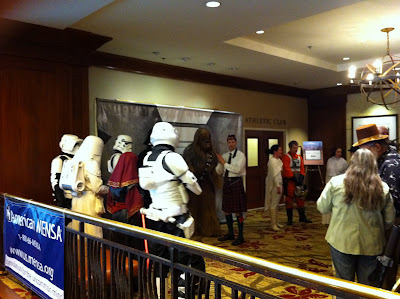 Or the ginormous selection of games in their 24 hour game room: 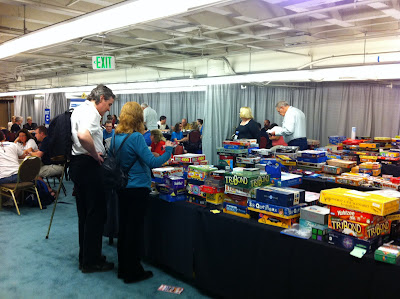 The most odd and intriguing bit of Mensa culture to me was their sticker system for the name badges.

Some people’s badges got fairly intricate (Red over green = hug me if you know me, but not if you don’t, etc). I originally didn’t put any stickers on because I had no idea what they meant, but after being hugged out of nowhere by a complete stranger, my badge quickly looked like this: 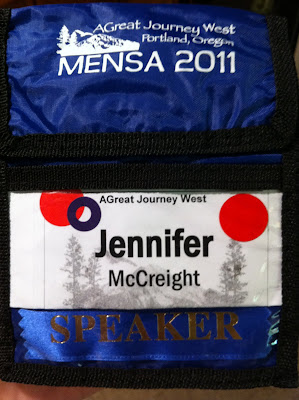 I giggled at this at first, but honestly, it’s not a bad idea. Especially in a group of highly intelligent people, where some may not be the best with social graces. Just think how this could reduce drama at atheist meetings. Seriously considering making a “Now you can flirt with me” pin for TAM.
Saturday was my talk. I was a little nervous going in, since this was my first time talking about the Creation Museum to a group that wasn’t explicitly atheistic. I could tell from flipping through their event program that Mensa was an eclectic bunch. While there were talks on science and forensics and godless people going to creation museums, there were also Bible studies and talks on spirituality and climate denial.

But it ended up going great – the audience was super receptive. And man, did they pack in. There were only 56 chairs, but probably 100 people squeezed into the corners, sat on the window ledges, sat behind me, or spilled out into the hallway. This photo doesn’t even catch about 20 people hanging around the sides: 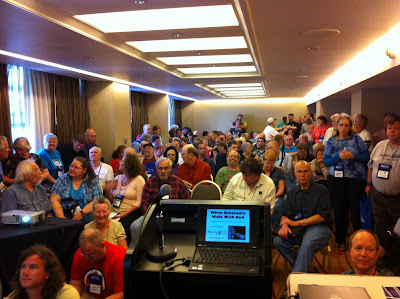 Some people had to be turned away, and a bunch even asked me if I would repeat the talk again later for those who couldn’t fit – but unfortunately I had to get back to Seattle soon after.

I’m not going to lie – it was a pretty nice compliment having people from Mensa asking when I’m going to write a book (When I have time, so probably never) or when I’m going to join Mensa (when someone comps my fees because I’m a graduate student). Though honestly, I don’t really feel the need to join Mensa, even though my past test scores could get me in. I understand why people do – but I get my fix of intellectual interactions through atheism, skepticism, and biology.

…And a lot of those don’t charge a membership fee. Yes, I’m cheap.

Thanks again to Mensa Atheists for inviting me! And hello to all the blog readers I got to meet, hang out with, and destroy at Carcassonne.