Sorry for being a little absent lately. I went on vacation to Florida from the 25th to the 1st, which means I needed a week of doing absolutely nothing to recuperate (ah, vacations). But now that I’m properly rested, I get to babble about my trip for a bit!

Vanessa (my friend/roommate), Ben (my friend/her boyfriend), and Jeff (my friend/ex boyfriend from high school…long story), and I left West Lafayette at 5am for our long drive to Florida. Ben was our first driver since he was the only person who got enough sleep to be functional. So not only were we all trapped in my car for 16 hours, but we were sleep deprived – extra delirium!

The drive was okay until we got to Kentucky – which, of course, was when I had just taken over driving. Cool fact: It’s generally not going to be fun when you see a giant plume of smoke on the road ahead of you. 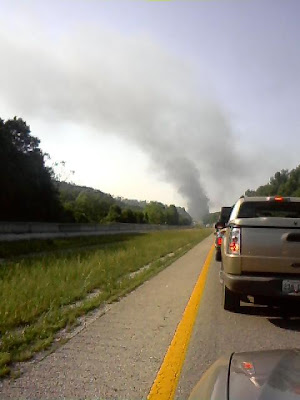 Apparently two semis had collided and effectively shut down I-65 going both directions. We ended up sitting still for an hour and a half since there was only one tiny part of the road where you could do a U-turn.

Jeff: Well now that we’re stuck in traffic, this is a great time for me to tell you about Jesus.
Me: Nooo! Tuck and roll!

It took us another hour to go through the detour because that’s where everyone else was going. Then Jeff started playing the dueling banjos song (I have no idea why he had this on his iPod), which officially drove me insane at approximately 10:30am. Kentucky, the only reason why you’re not on my shit list is because I happen to currently like a boy from you. But be careful, you’re on watch. 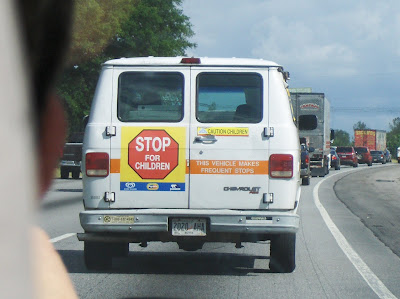 Apparently everyone else in the car had gone insane as well. Vanessa suggested we get matching Darwin Fish tramp stamps. Then in Georgia we got stuck behind this car driving really slowly in the left lane (raaaaaaaaaaage) that had a “Jesus is Lord” bumper sticker. We drove behind them for a good period of time without them realizing they needed to get the fuck over.

Jeff: Only prayer will solve this.
Us: *fake pray*
SUV: *wedges between us and Jesus car and rides its ass*
Jesus Car: *changes lanes*
Jeff: Divine intervention!

Eventually we made it to Florida, died of exhaustion, and then woke up early to go to Disney World. 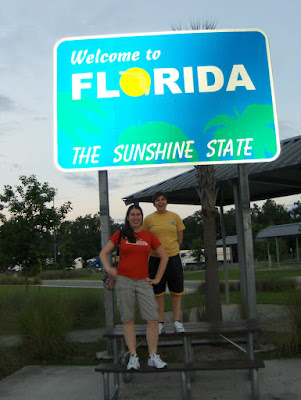 It wasn’t very sunny when we got there. Stupid Kentucky.