Our club had our annual controversial event, Fiction for Fiction, yesterday and today. It was originally inspired by the Smut for Smut event, but we didn’t want to be quite so inflammatory (or lynched), so we toned it down a bit. It’s honestly the “worst” thing we do on campus, mainly to satisfy our more outspoken members. I usually have minor panic attacks about it when planning, imagining all the religious groups on campus joining together to chuck rotten fruit at us or something. It went successfully and without produce-throwing last year (which Hemant blogged about), so we decided to do it again. 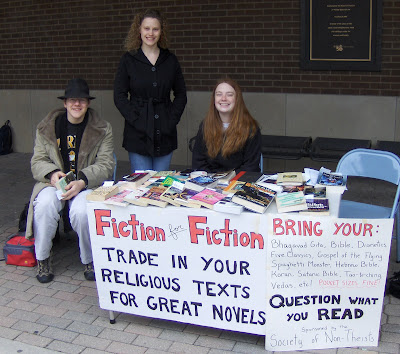 While I am also a cute atheist chick, neither of these are me. I will forever remain mildly elusive! Mwahahaha!

We also handed out a small flyer with a link to our website and the following explanation of our event to people:

“Religious texts may give some moral guidance, but that does not necessarily mean what they say is true. Fictional novels can contain important morals and insight into human life. You must think critically and ask questions to learn from what you’re reading. We encourage you to come to your own conclusions about what is fact and what is fiction. If you would like to investigate inconsistencies and contradictions specifically in the Bible, Koran, and Book of Mormon, skepticsannotatedbible.com is a great place to start.”

The event went well again. We had about 15 books traded in, but tons of people said they would have if they had a religious book. The worst response we received was a couple of dirty looks, but they were far outweighed by the many smiles and thumbs ups. Atheists are definitely the minority at Purdue, but I think it’s so refreshing for people to see an event like this instead of the usual preacher telling you why you’re going to burn in hell.

I know some people poo-poo the idea of having an event that criticizes religion in any shape or form. I’ve stated before the importance of being able to criticize religion, just like any other idea. That’s a whole other issue that I don’t want to deal with right now, but it does look like we’ve already made someone angry. You know you’ve really hit a nerve when someone’s blogging about you.

Do I feel bad? Maybe a little. The intent of our event isn’t just to piss people off, though I know it’s inevitable when you’re dealing with a touchy subject. But we have a message that even many theists agree with (and told us so at the event!). Yes, “Fiction for Fiction” contains a bit of shock value, but it is an event. I don’t think “Hey, You Know, Not Everything in Religious Texts Are Necessarily True, You Should Really Think Critically About What You Read and Investigate These Outside Sources” would work quite as well. But if we were just looking to upset people, we could have stuck with Smut for Smut.

Do I feel annoyed? Yes. It’s obvious from this person’s post that he didn’t bother talking to us, taking a flyer, or even reading our signs. And you all know what I do best when I’m annoyed…that’s right! Reply in an aggravated and hopefully humorous way! My comments small and in red:

Not everyone is smart, awww, I think he’s referring to us… but everyone has a strong stance on about every topic. Whether it’s evolution, global warming, or religion; you always have a stance on these topics. Listening to people talk, I hear people voicing their opinion on evolution; accusing it to be either true or false based on what little knowledge they have about it. Everyday civilians comment on how global warming is a conspiracy, despite professionals swearing to it. The worst of these is religion.

Religion is one thing that none of us seem to agree on, but we still have to make our voice heard. Even if you don’t believe anything, that must also be vocalized. I completely agree! You’re being so understanding! …Wait… I saw a quintessential example of this at campus yesterday. Some opinionated enthusiasts were sitting at a booth outside of the “class of ‘50” with a sign that read, “Fiction for Fiction; trade your religious texts for fictional novels.” That was probably the most useless and offensive table set up that I’ve ever seen. Really? How about the Islamo-Fascism table about evils of Islam and how Evangelical Christianity is so much better? How about the various preachers saying everyone’s going to hell if they even blink funny? How about the “Obama hearts terrorist” signs? How about the anti-affirmative action cookie sale where different races had different prices? How about the “pie a terrorist” where students dressed up as Muslims? We really top the list?

What could these people’s point possibly be? Are they saying religion is fiction? Um, yes? The fact that you’re freaking out about this possibility is the whole reason why we’re having the event. Because some people have never even thought about it. I would have to dumber than them not to realize that that was their point. I’m not going to come down on them for voicing their opinion, even though you are by repeatedly calling us stupid and offensive except that the entire basis of their opinion is to oppose another. This “fiction for fiction” trade is the opposition to organized religion like, for example, pro-life opposes pro- choice. The opposing parties involved in that example believe different things, which happen to be the opposite. One party didn’t form due to an opinion they held and that being the sole cause of the other party’s formation. I’m not quite sure what he’s even trying to say here – that our whole purpose is to be cranky about religion because religion came first? First of, opposing someone does not mean you’re automatically wrong. But if he wants to make that argument, atheism was around since the dawn of the universe, and religion is just a recent blip in time. We win, neener neener.

What is this “fiction for fiction” table’s goal? Are they trying to spread the word that religion is fake? Maybe you should have taken five seconds to find out! Nah, that would have been too hard. What would people’s reaction be if equally as zealous people went exclaiming their religion to the campus? These people are now on the same arrogance level as the bible thumpers that they oppose. Ummm…this happens all the time? And yes, we want to counteract them with a bit of reason? But does telling people to think critically and come to their own conclusions equal dogmatic teaching and threats of hellfire? I think not.

I don’t know if atheists have a holy book, but if they do, I’d like to bring it to that table. And see what fiction novel they give me in return for my fiction book. No, we don’t, since atheism isn’t a religion, but if you can read the sign, we do include “Gospel of the Flying Spaghetti Monster” as a religious book to be fair. We even accepted someone trading a fiction book for a copy of the Koran we had. We’re pretty lenient! Anything to get people reading, and that includes learning about other religions. Heck, most atheists say reading holy books is what made them atheists!

I wonder why they didn’t just set up a table that said, “don’t talk to me, you won’t like me.” It would have gotten their point across better. Because there are plenty of people who do like us for doing this.

However, I wasn’t terribly offended. Could have fooled me. If some brainless thanks college kids think that religion is a hoax, then I’m not at all surprised. College students are probably the least religious group of individuals in our nation. Think about it in this sense; these kids are enjoying their newfound freedom that comes along with leaving home and becoming an adult. They can do whatever they want, so why would they want some greater power in charge of them? Because there’s absolutely no evidence for a greater power, and some people cannot be open about their beliefs until they’re away from overbearing parents. This isn’t some rebellion against God…that would make as much sense as rebellion against the Tooth Fairy. We are, however, terrified that people with university level education can still believe in something as equally silly, or be offended at the idea that others don’t think the same way as them.

This is just how I perceive all of this in order to not get too upset about people claiming my religion is “fiction.”

So he admits that he’s just making up reasons about why he shouldn’t be upset? Maybe instead he should ask himself why he’s upset. Does he have doubts that he’s ignoring? Has he never even thought about this before? Is he too scared that he’s been believing in something that’s not true all these years? It’s natural to be annoyed and even afraid, but don’t take it out on us. In fact, getting people to question beliefs they’ve taken for granted is the main point of this event. So I guess in a way, we’ve succeeded.

Oh well, I’m honestly not that upset. I just like replying to people. And honestly, if we made some people cranky, so be it. We’ve already had a bunch of new people sign up to our mailing list, including one of the campus bus drivers. Maybe we can ask her to drive our future atheist bus!