The German Tank Problem supposes that there are N tanks with ID numbers from 1 to N. We don’t know what N is, but have looked at a single tank’s ID number, which we’ll denote m. How would you estimate N?

This is a well-known problem in statistics, and you’re welcome to go over to Wikipedia and decide that Wikipedia is a better resource than I am and, you know, fair. But, the particular angle I would like to take, is using this problem to understand the difference between Bayesian and frequentist approaches to statistics.

I’m aware of the popular framing of Bayesian and frequentist approaches as being in an adversarial relationship. I’ve heard some people say they believe that one approach is the correct one and the other doesn’t make any sense. I’m not going to go there. My stance is that even if you’re on Team Bayes or whatever, it’s probably good to understand both approaches at least on a technical level, and that’s what I seek to explain.

In both approaches, we assume that the tank we observe is randomly selected from 1 to N. Therefore, the probability of observing m, conditioned on N is

The basic difference is this: The frequentist approach takes this lone assumption and runs with it. The bayesian approach generates stronger answers to the problem, but requires additional assumptions.

The conditional probability P(m|N) is a function of two variables, m and N. It may be helpful to plot this as a 2D heat map. 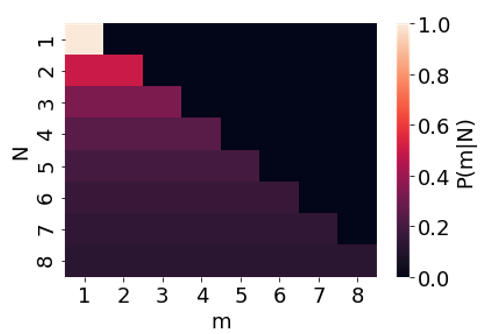 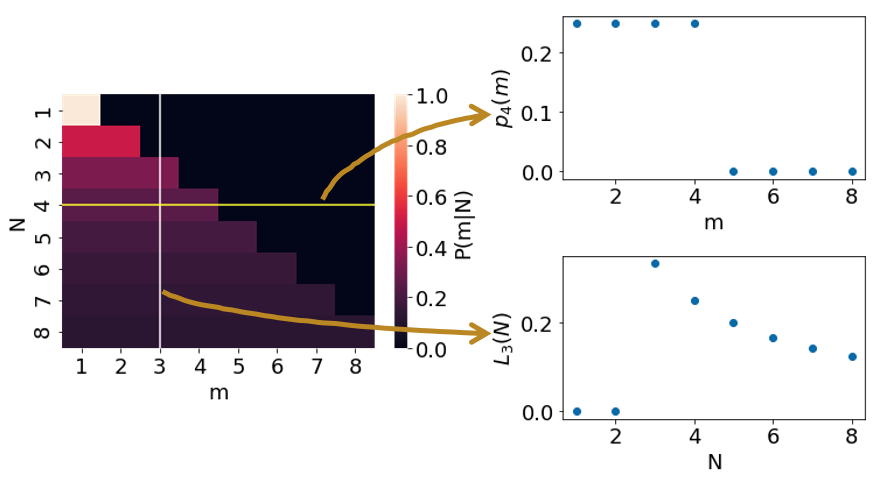 These two families of functions are fundamentally different from each other. pN is a probability distribution function. It has the usual property that the sum of all probabilities is equal to 1. Lm, on the other hand, is what we call a likelihood function. Unlike probabilities, likelihood does not necessarily sum up to 1, and in this case the sum of Lm diverges to infinity.

Now, the ultimate goal of our approach is to “estimate” N, given m. Essentially we want a function f(m) which generates our guess for N. This function is called an estimator. The frequentist framework does not specify which estimator is the “best” one, but I’ll discuss two common types of estimators.

The first is the Maximum Likelihood Estimator, or MLE. This is given by

In the case of the tank problem, MLE(m) = m. So using this estimator, you would guess that the number of tanks is equal to the one ID number you saw.

In the German Tank Problem, there is a single unique unbiased estimator: f(m) = 2m. So if you see the ID number 100, you would guess there are 200 tanks.

The unbiased estimator is fairly reasonable, and is the most-often quoted “answer” to the German Tank Problem. However, the estimator is limited in some ways. For instance, suppose I made you a bet. You pay me a flat amount, and I pay you $N. How much should you be willing to pay me for this bet? You could obey the unbiased estimator, and pay up to $2m. But $2m isn’t the expected payoff of the bet given m, it’s something else entirely, so there’s no guarantee that this strategy is “correct”.

The Bayesian approach is interested in drawing conclusions beyond what is available to the frequentist approach. After all, what is an “unbiased” estimator really? Does it help you win bets? Can you eat it for dinner? And admittedly there’s a communication issue with the frequentist approach, where people confuse likelihood with probability. “Likelihood” is such an arcane concept, and in colloquial language it’s just a synonym for probability. If you’ve ever seen people interpret p-values as probability, that’s precisely the error I’m talking about.

Once you have P(N), this formula is rather straightforward to calculate, so I’m skipping that part. Wikipedia has you covered if you want more gory detail. However, Wikipedia, I observe, only solves the problem for a particular choice of P(N). And in my opinion, the wiki obfuscates what its choice of P(N) is. So let’s talk about choosing P(N).

The most common choice of P(N) is a “uniform” distribution. That is, consider every possibility, and assign each possibility an equal prior probability. Or, if N were a continuous variable (i.e. if non-integer number of tanks allowed), then the probability of N being between a and b is proportional to |a-b|.

The German Tank problem has an additional complication, in that a true uniform probability distribution isn’t even possible. There are infinite possible values of N, so if we tried to construct a uniform probability distribution, we would end up with P(N) = 0 everywhere–not a valid probability distribution. One way to deal with this is to place an upper bound on N; for example, allowing N to be uniformly distributed between 1 and Ω. This is the choice that Wikipedia makes, but this leads Wikipedia to the conclusion that the expected number of tanks depends on our choice of Ω. Furthermore, as Ω goes to infinity, the expected number of tanks goes to infinity as well.

Philosophically, P(N) is said to represent your “belief” in N. So the many possible choices of P(N) may reflect the fact that we have different starting beliefs. Generally speaking, Bayesian analysis is most compelling when it a) works for a variety of choices of P(N), or b) P(N) is grounded in some external knowledge, such as an analysis of how many tanks it would be reasonable to produce.

The German Tank problem is a basic statistics question that can be used to illustrate both the Bayesian and frequentist approaches. The Bayesian approach gives the more concrete solution, in the form of the expected value of the number of tanks. However, the solution depends on additional assumptions, and unfortunately there is no neutral choice of assumptions available. The frequentist approach does not use any additional assumptions, and provides an estimator with a simple form, equal to twice the observed ID number. However, this estimator can be confusing to interpret, and it is technically incorrect to describe it as the expected number of tanks.