We are living in an epidemic of armchair epidemiology, and far be it for me to contribute by giving my own feverish take as an expert of an unrelated field. Therefore, I solemnly swear that I will make no predictions about the present pandemic. I am not paid enough to make such predictions–and if you did pay me I would consider it my professional duty to find you a better expert.

What I can do for free, is read up on basic epidemiology, and digest the maths for you, dear reader. My sources: Wikipedia’s article on mathematical modeling and compartmental models, and some lecture notes I found. My expertise: during my PhD in physics, I frequently worked models like the one I’m about to discuss, only with electrons instead of people.

The SIR model is intended to work for “outbreaks”, such as what we have right now with COVID-19.  There are other kinds of situations, like what we have with the flu.  The flu just kind of sticks around in perpetuity, because people never gain permanent immunity.  The SIR model is built on the assumption that once people recover, they’re not susceptible anymore.  I don’t think anyone knows if this is true for COVID-19.

Compartmental models strike me as quite limited, and fail to capture the effects of, for instance, a class of workers who are at greater risk of exposure to illness. I’m sure epidemiologists must have much more complicated models in their toolset, but we’re just doing baby’s first epidemiological model.

The SIR model comes with a set of equations that predict how the number of people in each of the three compartments will change over time. These are written as differential equations:

(Note: S, I, and R usually defined as absolute numbers of people, rather than fractions, but my way works too.)

The second process is recovery.  The model assumes each infected person has a constant probability of recovering on any given day.  To my eyes this assumption is not very realistic, but I suspect including a more realistic recovery curve greatly complicates the math while still giving approximately the same results.

There’s a trick to solving differential equations like these: don’t bother, just use a computer.  I built a basic simulation in Excel, to show how S, I and R develop over time. 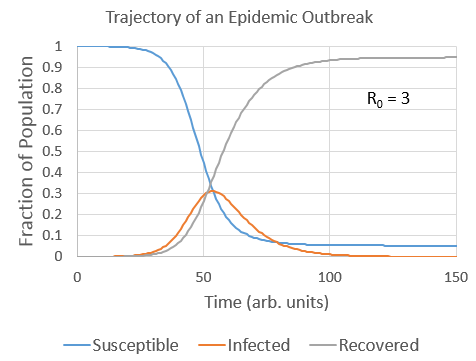 I’d like to note several stages, each of which I will characterize mathematically.

During the exponential stage, I and R both increase exponentially.  We expect a doubling rate of ln(2)/(β-γ).  Another neat fact is that R = I * γ / (β – γ).  Or at least, that’s what we expect initially.  As time goes on, the doubling rate will slow down, eventually stopping when we reach the turning point.

You might have noticed that the doubling rate becomes negative if β>γ.  If β>γ, then the number of infected people decreases at all.  So, you don’t have an epidemic at all.  People recover too quickly to infect enough other people.

You may have read in the newspapers that one really important number associated with the epidemic is R0.  R0 is the average number of people infected by each infected person before they recover (at least, initially).  The more precise definition is that R0 = β / γ.  When R0 < 1 the disease dies out; when R0 > 1 we have an outbreak on our hands.

I’d also like to clarify the relation between these numbers, and the “cumulative cases” that are usually reported in the news.  The cumulative cases is basically I+R.  The problem with looking at cumulative cases is that as social behavior changes, the value of R0 changes.  Cumulative cases depends on both the current value of R0, and the historical value of R0.  I think a better measure of current growth rates would look at only I–approximately the number of recent new cases.  Although maybe that data is too noisy, I don’t know.

What causes the turning point in infections?  It’s herd immunity.  If 50% of the population is in the “recovering” group, then 50% are immune to infection, so it’s effectively like β is 50% smaller than it was at the beginning.

So yes, herd immunity will eventually stop an infectious disease in its tracks, but it takes a very long time, requiring a significant fraction of the population to be infected.  This is why the whole claim about California having herd immunity from earlier infections is absurd on its face.  Herd immunity takes a lot more than that.

Eventually, almost everyone gets infected, and recovers one way or another.  One thing that surprised me is that it’s only almost everyone–some people escape!  In fact, you can predict how many people will get infected, based on the value of R0.  I made a chart, based on more Excel simulations (assuming that everyone is initially susceptible). 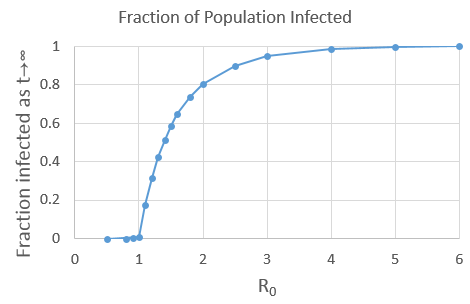 If R0 is at least 2, and if everyone is susceptible, at least 80% of the population will be infected, and there’s not a whole lot we can do about it.  It’s unclear that social distancing measures will be able to change R0 by enough to escape that eventuality.  This is why most public health messaging emphasizes “flattening the curve”.  Because we’re not sure we can prevent most people from being infected, but we can spread the infections over a longer period of time, reducing hospital overloading.

Based on what I’ve read, a major difficulty is that we don’t know what numbers to put into the model.  The number of susceptible people, the rate of infection, the rate of recovery, the symptomaticity ratio, and fatality rate… we don’t know any of them.  And they would vary by country, and change with social behavior.

There is also the other difficulty, that we don’t know if this basic model is even sufficient.  Or at least I don’t know.  Ask an expert, folks.  I gotta say, those Medium posts where people just assume that the infection curve is a Gaussian seem pretty goofy.  You couldn’t even use the most basic model like what appears on Wikipedia, eh?

So how did I do?  Did I step too far outside my area of expertise?

My PhD work involved creating excited populations of electrons, and watching them relax over the course of picoseconds.  The rate of relaxation sometimes depends on two-electron scattering, so it would be proportional to the square of the number of electrons.  It’s not quite the same as the SIR model but not too far off either.