Part 1: In which I have a cough

I graduated a couple years ago. I wrote a dissertation about time-resolved experiments on high-temperature superconductors. I am done with physics. I am switching careers.

Throughout my PhD, I suffered from long-lived coughs. I’d catch a mild cold, get over it, but continue coughing for two months. It got worse over the years and eventually I would just have a permanent cough, if not for medication. I have asthma, and I maintain my health with a combination of fluticasone furoate and vilanterol. It’s a few hundred bucks a month, billed to my insurance company.

Now I’m going to have to explain this, because it might seem wacky to our readers outside the US. In the US, we don’t have universal healthcare coverage, because I guess that interfere’s with Republicans’ civil liberties or something. Health insurance is attached to one’s job, which allows us complete freedom to choose our healthcare plan by, uh, finding a different job.

For us jobless people, it used to be that people with chronic conditions could not buy it at any price. That’s because of a little something called “adverse selection”, which causes free markets for insurance to collapse. These days, we at least have Obamacare, which isn’t very good but is better than nothing.

I almost got Obamacare, but luckily there was another option available: getting married to someone with employer-provided health insurance.

Part 2: In which we destroy marriage

I did not get married. I got a domestic partnership.

It’s funny, I lived through those years when conservatives were always arguing that same-sex marriage would destroy the institution of marriage, and I always thought “If that’s what we’re trying to do then we’re doing it wrong.” A better way to destroy marriage would be to have another institution that is not marriage but fulfills similar functions–like a domestic partnership.

Not that I want to destroy marriage. Marriage is great. Everyone should get married. To everyone else. I asked my husband, “If everyone were married to everyone else, would that finally be the socialist utopia we’ve been waiting for?” “It depends on which marriage rights are retained in this hypothetical,” he said. Theory: confirmed.

Part 3: In which we avoid hiring an accountant

This is all rather complicated, and a couple friends who were themselves in a domestic partnership ominously advised that we hire an accountant. But guess what’s easier and cheaper than an accountant?

So we did get married, at the end of the tax year. We went to the courthouse with our friends, who got married at the same time. It was a proper elopement—nobody else knew.

The next day, we went on a cruise ship to Mexico. Not as a honeymoon, it was just a family vacation, with my 20 closest relatives. Later, when we were with my parents on a whaling boat, we broke the news to my parents. They took it well. It wasn’t much of a surprise, since we had been cohabiting for several years.

Our hope was that the news would spread out from there, but it turns out that my family gossips a lot less than I thought. Curses!

Part 4: In which there is cake

In the year leading up to our marriage, I talked a lot about organizing a wedding. I never got anywhere.

The thing about weddings is that they’re just chock full of traditions that I can’t even keep track of. My understanding is that the purpose of tradition is to provide familiar structure, or help us feel connected to the past. But wedding traditions do not provide familiar structure, and do not make me feel connected, if I am not previously even aware of the traditions. They’re just random rituals I have to follow because maybe some relative will wonder why it’s not there. I dreaded the very thought. Weddings are expensive too. Hey, gen-Z readers! Do you think you could kill what we millenials could not?

After failing to even start organizing a wedding, after we were married I talked about organizing a wedding reception. Again, I didn’t get anywhere. I eventually decided I didn’t want it enough, and gave up. But my mother said she already told our relatives, and so she asked if I would let her organize a small event anyways. Very well, as long as it’s small.

“Small” ended up being my 40 closest relatives. See, there’s this older relative who would be very offended if she wasn’t invited, even though she would not be able to come, and then we needed to invite the rest of the older generation, followed by all my mother’s cousins. I have an app to keep track of them all.

Although I was dreading it, it was enjoyable. My mother did a wonderful job, and let us not speak of any conflict we had in the organization process. I think it helped significantly that we branded it as an anniversary luncheon, rather than a wedding reception. That meant dropping most traditions, and fewer toasts where people tell us about love. Procrastination wins! 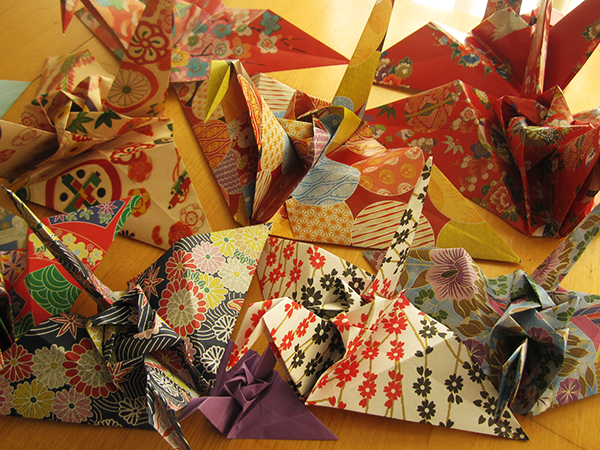 My primary contribution to the event was a set of decorations.

My husband wisely avoided involvement in the decision-making, but he did have a single demand: the chocolatiest cake we could find.

This has been cross-posted to my other blog.

Ethics of accuracy » « My guide to drone music