This is the fourth part of a series about symmetry in origami.

Given an origami model, what are the possible symmetric colorings?

This is a question I posed in an earlier post, and I said I didn’t know the solution.  I thought about it a lot, and I found the solution. I will write up a mathematical proof in a later post.  Here I will just explain the result.

Suppose we want to find a symmetrical coloring of a cube. First question: Are we assigning a color to each face, each vertex, or each edge? We want to find a general solution that will work in all three cases, as well as any more complicated case. So the first thing we need to do is divide the cube into fundamental domains. 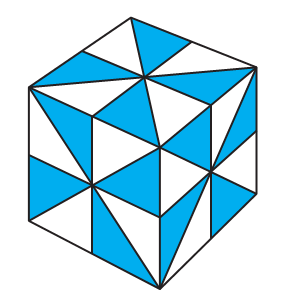 A fundamental domain is the smallest unit that can be copied (via symmetry transformations) to create the whole object. In the above image, I show one possible way to draw fundamental domains, using triangles. A cube has a symmetry group of order 48, so that means we need 48 copies of the triangle to make the cube. There are 8 triangles on each face, and 6 faces, so that adds up to 48.

Suppose we assign each of the fundamental domains a number. We number them 1, 2, 3, etc. all the way up to 48. Each symmetry transformation is a permutation of these 48 fundamental domains. For example, if I rotate the cube by 90 degrees, we might find that domain 1 goes to domain 2, and domain 2 goes to domain 3, and so on. There are 48 symmetry transformations, and these correspond to 48 different permutations of the 48 domains.

You can use multiple colors for each fundamental domain. I looked through my photo archives, and found an example: 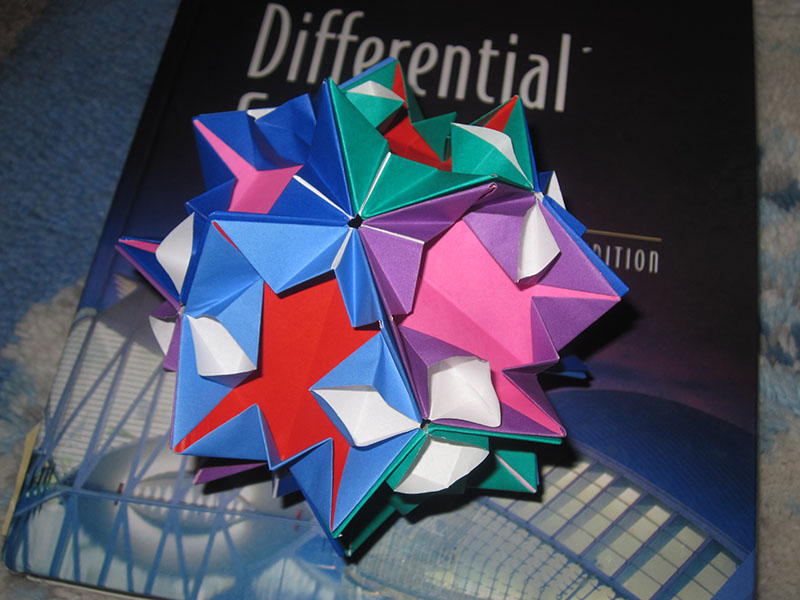 Meenakshi Mukerji’s Impatient Trillium Bouquet. Yes, I took a photo of it on top of a math textbook. 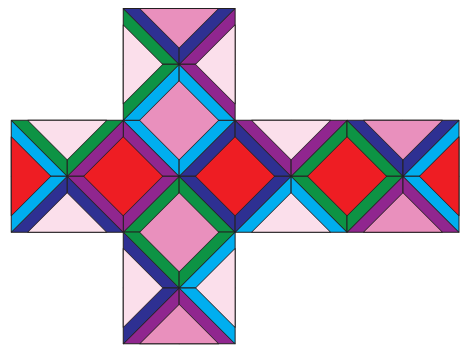 Here’s a diagram of the Impatient Trillium Bouquet’s coloring on an unfolded cube.

The first step is to give x a color. Let’s make it green. 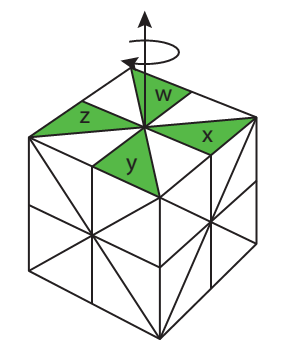 In my example, P1 is the set of rotations around the indicated axis. I chose x such that the green fundamental domains form a windmill pattern.

The third step is to rotate this pattern using each transformation in P. Whenever a transformation causes the pattern to be in a new location, choose a new color that hasn’t been chosen before. Now assign that color to all the fundamental domains in the pattern. In our example, the pattern is shaped like a windmill. So we want to rotate and reflect this windmill pattern every which way. We’ll end up with differently-colored windmills all over the cube. 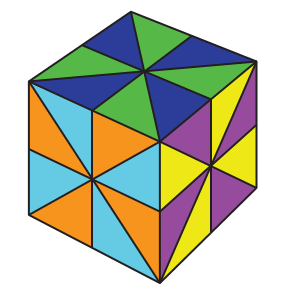 The final coloring of the cube.

So, now we have a symmetric coloring. How many colors? In this case, each color is assigned to 4 domains, and there are 48 domains total. So that means there are 12 colors. In general, the number of colors is equal to the order of P divided by the order of P1.

Last question: what’s the size of C, the color symmetry group? It turns out that C is the largest normal subgroup of P such that C is contained in P1. In group theory terminology, C is called the normal core of P1 in P.  Remember normal subgroups? I said they were important!

Wikipedia has a handy diagram listing all the subgroups of the cubic symmetry group (although Wikipedia refers to it as the Octahedral group). I’m not going to explain how to read this diagram, I’m just going to point out that if P is the full cubic symmetry group, then you can find an exhaustive list of all possible choices of P1. 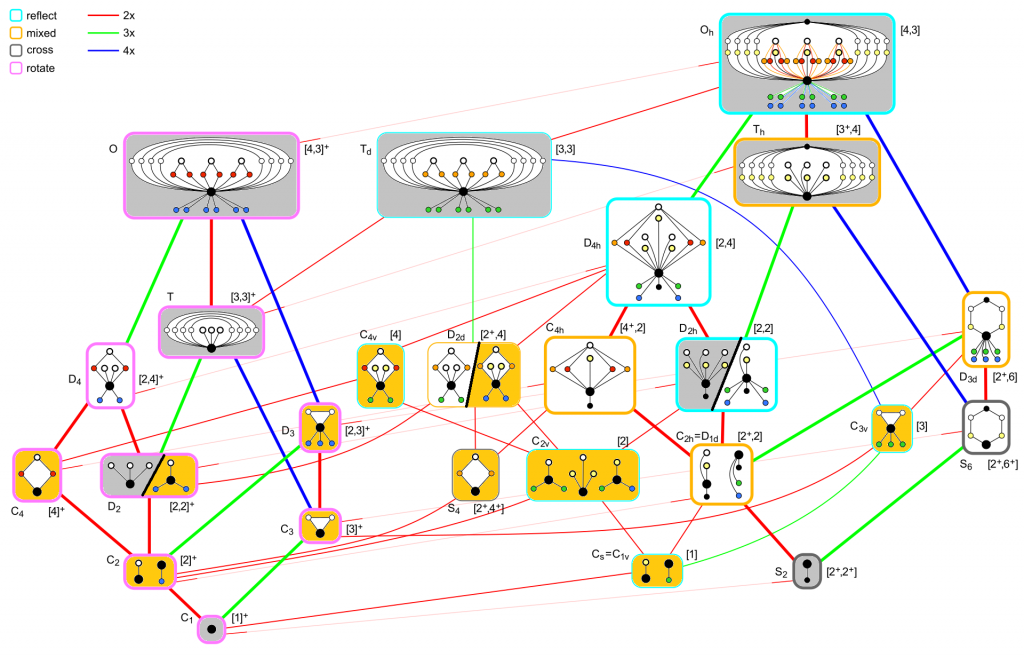 A diagram of all the subgroups of the cubic symmetry group (aka the octahedral symmetry group). This is from Wikipedia, but with a few modifications. The color gray indicates normal subgroups, and the color orange indicates choices of P1 that lead to C being the trivial group.

One last thing. Take a look at this model. 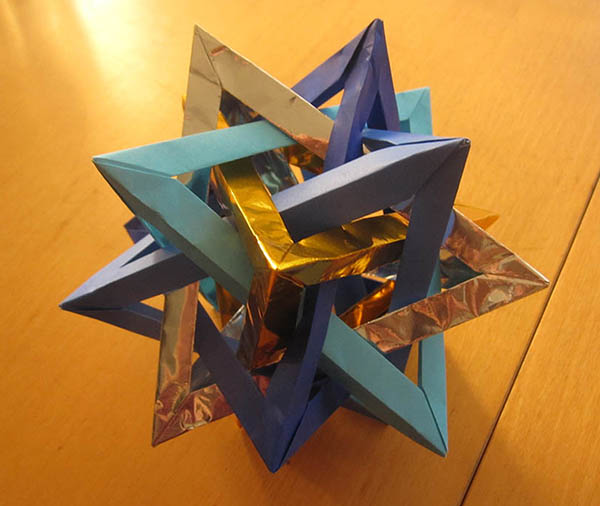 This is a very famous model. It literally consists of five tetrahedra arranged in a symmetrical way. Robert Lang, origamist and mathematician, has asked: are there other similar models we can make? For example, could we arrange 6 pentagons, or 5 octahedra? He explored this class of models, and calls them polypolyhedra.

It turns out that there is a direct correspondence between polypolyhedra and symmetric colorings.  If you look closely, you will see that each of the 5 tetrahedra is identical, but in a different color.  This implies that no matter how you rotate the object, if the rotation preserves the shape then it also preserves the color pattern.

So, after figuring out how to construct symmetric colorings, I discovered that Robert Lang had already solved what is mathematically the same problem.  He exhaustively listed out all possible polypolyhedra, and as far as I can tell, used the same construction as I did.  I was very excited to discover that this technique could be used not just to design colorings, but to design more complicated models with multiple polyhedra.