What is an unbiased test?

So let’s suppose that I measure JSQ in men and women, and find that it depends on gender. In mathematical terms, I find that

where Z is an indicator (JSQ) and V is a demographic variable (gender). What I want to prove is that job suitability depends on gender.  In mathematical terms, I want to prove

where W is the latent variable (job suitability).

In English, if two candidates are equally suitable for the job, then the probability distribution of their JSQ scores should be the same regardless of gender. Equations (1) and (3) logically imply (2).

Now, psychologists can’t really measure latent variables. So instead of measurement invariance, they look at a related property called predictive invariance. Basically, they look at how good the test is at predicting outcomes. For example, after measuring JSQ, we might give all the test subjects the job, and then see how well JSQ predicts their later employee evaluations. Predictive invariance means

Millsap proves that they contradict each other, in the generic case and under basic assumptions. By “generic” I mean that there are some pathological cases where the proof fails, but they aren’t realistic. The “basic assumptions” are Equation (1) and Equation (5) below:

Equation (5) is called local independence. Basically, Y and Z are both noisy indicators of the latent variable W, and Equation (5) requires that the noise in Y and the noise in Z are uncorrelated to each other.

In case you forget what anything stands for:

The proof I provide here is not complete, and is not the same as Millsap’s proof. I wanted to come up with something that is visual and accessible, so here it is.

Suppose (in order to prove a contradiction) we have a test where equations (1), (3), (4), and (5) hold true. Also, for simplicity suppose that job suitability, JSQ, and employee evaluations are all continuous variables with the same units (this allows us to plot them together). JSQ and employee evaluations are both indicators of job suitability, but each one introduces some error. We have 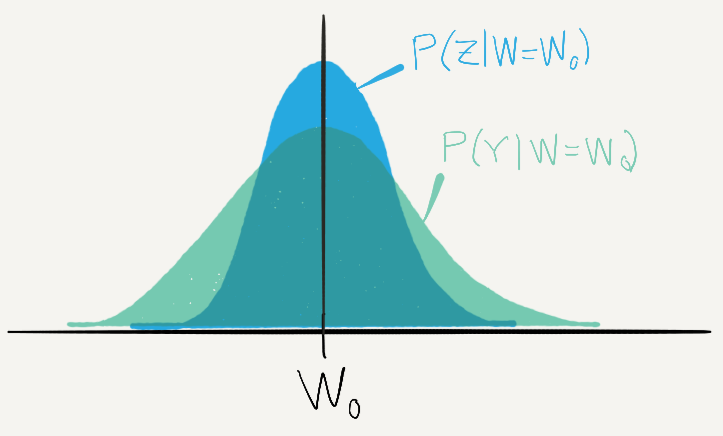 That’s nice, but that assumes we know a person’s real job suitability. In reality, the only information we might have is their JSQ. Given a particular JSQ (Z=Z0), what is the expected value of their job suitability (W)? 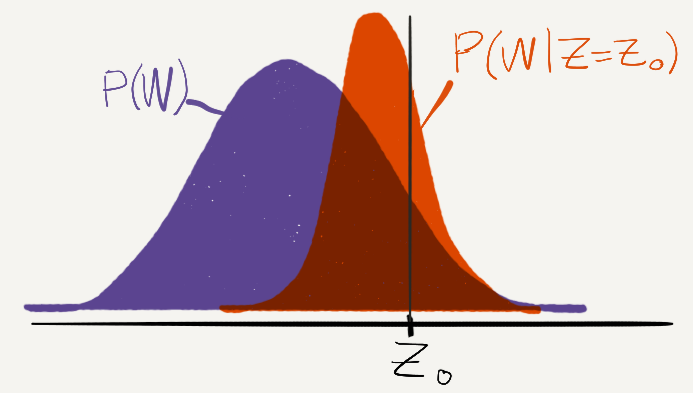 Here’s the thing. JSQ is an imperfect measure of job suitability, because it introduces random noise. But even if you average over the random noise, JSQ is still an imperfect measure of job suitability. For example, if one person’s JSQ is much higher than average, it’s likely that this is because the random error in the JSQ was in that person’s favor. Therefore, a person with a high JSQ is likely closer to the average than they initially appeared, and will likely get more average employee evaluations later on. This is regression toward the mean.

Now, suppose that the distribution of job suitability is different among men (P1(W)) and women (P2(W)). If this is true, then our prediction of employee evaluations does not just depend on JSQ (Z), but should also depend on gender.

I found this paper troubling to read, because it seems to be saying all of psychology is wrong. But it’s difficult to say just how much of an impact this makes.

Having spent a while trying to decipher his papers, I feel that Millsap really didn’t appreciate how hard they are to follow.  Reading someone else’s mathematical proof is like reading someone else’s computer programming, only a bunch of steps have been skipped because they’re in a previous publication or because they’re “trivial”. (And I realize that many readers will have difficulty grasping my proof as well. My sympathies to you, I try my best.)