In recent news (cn: autoplay), a United Airlines passenger was unwillingly dragged off a plane to make seats for employees. The incident was partially blamed on the common practice of airlines to deliberately overbook flights in order to make up for all the no-show passengers.

While I won’t discuss the particulars of this incident, I am willing to do something that most journalists are not: read relevant academic literature. I just picked one paper that appeared to have a sufficiently broad perspective:

The basic problem is that many people who buy airplane tickets don’t show up. In 1961, the Civil Aeronautics Board (CAB) reported that 1 out of 11 ticket sales were no-shows. These numbers are about the same today, with 7-8% no-shows. The airlines could create wait lists to fill the empty seats, but it would be impossible to contact the wait-listed customers in a timely fashion unless they were already present at the gate.

The solution has been to deliberately overbook flights based on statistical predictions of the number of no-shows. Marvin Rothstein says that airlines have been deliberately overbooking at least as far back as 1960 when he first started working in the airline industry. Note that this is well before the US Airline Deregulation Act, which passed in 1978. The regulating board, CAB, approved of overbooking practices, stating that “present reservation systems of the carriers greatly benefit the traveling public”.

Since overbooking relies on statistical predictions, there will occasionally be cases where the predictions are wrong, and there are too many no-shows–or too few. When too many people show up to be seated, then the airline has to “bump” people off the flight. The CAB reported that from 1963-1964, there was about 1 bump for every 1,300 boarded passengers.

Bump rates are around the same today, but there’s a crucial difference.  Today, we distinguish between voluntary and involuntary bumps, with about 90% of bumps being voluntary.  In the 1960s, AFAICT they didn’t bother asking for volunteers, so basically all bumps were involuntary. 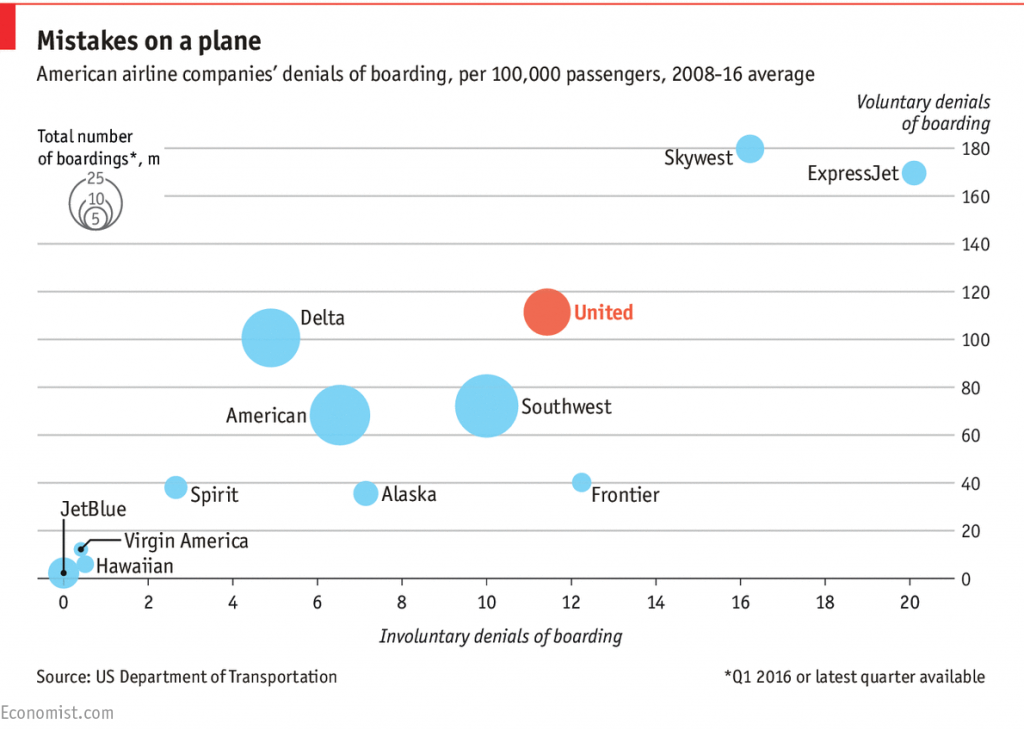 In 1961, the CAB tried to address the problem by instituting a no-show penalty. No-shows would have to pay 50% of the ticket price (which I think means they can only be refunded 50%, not that they pay an extra 50%). But they ended the no-show penalty in 1963 because they felt it was bad for public relations, and it was difficult to distinguish passengers who were no-shows because of connecting flight delays.

In 1968, industry outsider Julian Simon proposed a solution to the overbooking problem: when too many people show up, hold a sealed auction to find who is most willing to be bumped. Every airline rejected his idea at the time.  Simon published some amusing responses from the airlines:

United’s other objection is that “such a procedure would raise serious doubts in our customers’ minds concerning our ability to maintain even a reasonably efficient reservation scheme,” i.e., passengers might think that United overbooks intentionally – as it does.

Overbooking practices were kept in obscurity until 1972, when Ralph Nader himself was bumped from a flight. He filed a suit, and the Supreme Court ruled in his favor in 1976. In response, CAB made overbooking practices more transparent, increased the penalty that airlines pay for bumping passengers, and instituted the practice of asking for volunteers before bumping people unwillingly.

At this point, airlines found they could pay less by paying passengers directly, rather than paying the CAB penalty. Thus many airlines tried auction-like practices. Practices vary from airline to airline, but usually they hold a fixed-price auction.  They have an agent explain the situation and offer compensation for passengers to leave the airplane.

Very few airlines actually use the sealed auction originally proposed by Simon. A notable exception today is Delta Airlines, at least since 2011. From the above chart, you can see Delta has fewer involuntary bumps than other major airlines. The problem with the sealed auction is that it’s likely that the winners of the auction suffer from winner’s curse (ie they won the auction because of poor value estimation).

So if you don’t like United Airline’s overbooking practices, you could instead choose Delta or JetBlue.  However, I suspect most people will continue to prioritize ticket prices.

I close out with a quote from Marvin Rothstein, in 1985:

The passengers are supposedly on notice that the airlines overbook, but one wonders to what extent they really understand what is taking place. How much longer will the present precarious balance last? Probably only until someone brings another landmark lawsuit that upsets the whole applecart.