Not long ago a relatively complete Allosaurus skeleton was found in Colorado. It’s worth a lot of money and somehow ended up in the hands of a man named Michael Peroutka who donated it. To the Ken Ham’s Creationist Museum in Petersburg, KY. Guess what party he’s in? END_OF_DOCUMENT_TOKEN_TO_BE_REPLACED 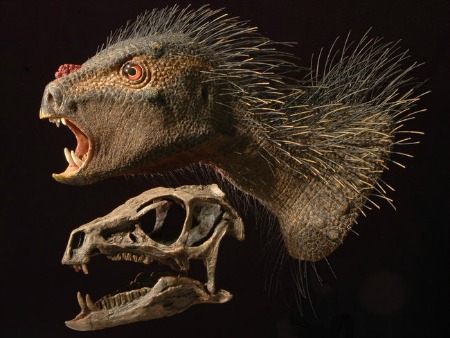 Scientists in South Africa and Chicago have shed new light on a bizarre looking dino. Pegomastax sounds like the platypus of dinosaurs: a seeming jumble of characteristics from several clades: END_OF_DOCUMENT_TOKEN_TO_BE_REPLACED 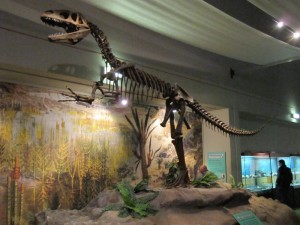 Another dino fossil, more evidence for feathers. Only this one is unique: it’s a megalosaur. A big non-avian therapod, and now we know it had feathers!

Hindustan Times— Theropods are bipedal, mostly carnivorous dinosaurs. In recent years, scientists have discovered that many extinct theropods had feathers. But this feathering has only been found in theropods that are classified as coelurosaurs, a diverse group including animals like T. rexand birds.Sciurumimus—identified as a megalosaur,nota coelurosaur— is the first exception to this rule. The new species also sits deep within the evolutionary tree of theropods, much more so than coelurosaurs, meaning that the species that stem from Sciurumimus are likely to have similar characteristics.

“All of the feathered predatory dinosaurs known so far represent close relatives of birds,” said palaeontologist Oliver Rauhut, of the Bayerische Staatssammlung fur Palaontologie und Geologie. Sciurumimus is much more basal within the dinosaur family tree and thus indicates that all predatory dinosaurs had feathers,” Rauhut stated.

Up to now feathered dinos had all been from the raptor family. But Mega is different. This Cretaceous lady was a two-legged meat-eater lacking the more obvious anatomical characteristics associated with feathers and birds. If she had feathers, almost any dinosaur could have had them. Which suggests that dinos evolved feathers long before birds and bird-like dinos diverged from other genera.

Most kids, and a few of us “older” kids, may think dinos are way cool. But a new study says no: they were hot, as in hot-blooded. And that may go for some of the larger ones: END_OF_DOCUMENT_TOKEN_TO_BE_REPLACED

Let’s follow the arc of just one wingnut whopper. It starts as a seed in the form of a flatly untrue headline by none other than Fox News shouting out ‘scientists say dinos farted themselves to extinction’. Ahem: END_OF_DOCUMENT_TOKEN_TO_BE_REPLACED 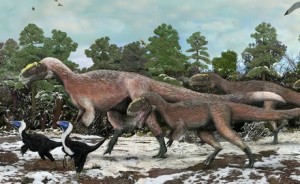 Most feathered dinos have been small, little meat eating raptors and bird-like flyers and gliders. But these guys are freaking huge: END_OF_DOCUMENT_TOKEN_TO_BE_REPLACED