Seems like only yesterday … It’s amazing to witness the contortions, the descent into madness, and possibly alcoholism or dementia, going down over the POW release over there to the right among the craziest theocons and the slickest maniacs. The dishonesty is so, so well documented that it’s gone beyond nauseating and turned into hilarious.

Below is another blast from the past, pure political comedy gold, from back in those ancient days lo these many weeks ago, wherein the social machinery was being pre-placed to attack anyone who stands in the way of Gilded Age 2.0: 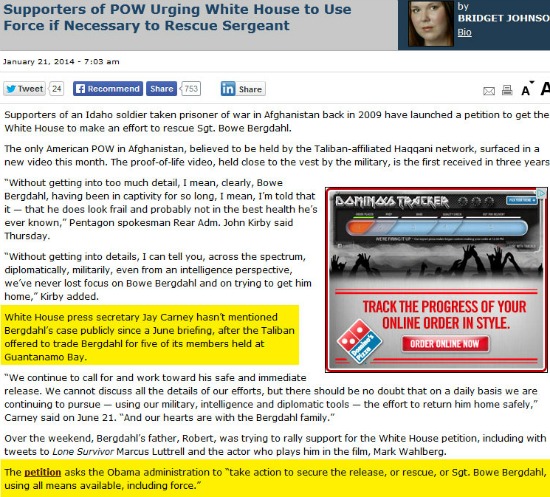 Just imagine how great it might have worked: starting with the total, rabid wingnut freakout we would have witnessed if it came to light that Obama could have gotten Bergdawl out, but chose not to, and then he died in a Taliban controlled shithole after five or six years in hell. They had preplaced some anti-Obama bombs ready to be detonated remotely and on command. The point of that “petition” and a bunch of comments and speeches by the usual suspects — who have since executed a neck-snapping 180 degree turn — wasn’t about getting Bergdahl back. It was about getting the WH back so that a tiny minority can impose their bullshit narrow interpretation of various books of ancient magic on the rest of us, to act as cover while they auction off our labor and more of our national treasure to the zillionaires they really work for.

Who doesn’t have sympathy for everyone of the millions of people the world over who are still subject to the arbitrary whims of a handful of Bronze-aged, overzealous, cruel-as-shit, fundamentalist hillbillies? Just the fact that these assholes are trigger happy, witch-burning, proudly-ignorant murderous throwbacks to the era of lords and vassals is all it takes to get my sympathy and I bet yours, too. Add in that these millions, born into bondage, suffering under the tired delusion held fervently by captors who believe they are chosen by an invisible sky-wizard to torture and enslave a helpless population composed mostly of women and children who can’t fight back, and I’m thrilled when someone comes out of it alive and with some chance at having a life. That easily includes people who may have gone crazy, who may have even been crazy already, and strolled off like a lost puppy dog into the merciless claws of said religious throwbacks.


Not sure if that last sentence applies only to crazy Muslim assholes. In all fairness, the crazy dominionist assholes on ‘our side’ aren’t as bad, but that’s in part because they’re held at bay. They can’t do half the awful shit in the name of God that they wish they could do. But we have plenty of home-grown fundies that could pass a Taliban-turing test under the right double-blind conditions.