Today in San Francisco, Elon Musk went on trial because he has been sued by some Tesla shareholders over this Tweet he sent out on August 7, 2017.

This Tweet that he was planning to take Tesla private by purchasing all the shares at $420 and that he had secured the funding to do so caused the stock price to rise sharply but the deal did not materialize and the stock price plunged a week later when it appeared that he did not have the funding deal.

In court today, Musk was accused of lying about having secured funding. The judge overseeing this new trial had already ruled that Musk’s Tweet was false and Musk has already been fined $20 million by the Securities and Exchange Commission for that Tweet but this new lawsuit has been brought by shareholders who argued that he was a reckless liar who had deceived them and they are seeking billions in damages.

A jury of nine, seated on Tuesday, will decide whether the tweets artificially inflated Tesla’s share price by playing up the status of funding for the deal, and if so, by how much.

During Tuesday’s jury selection, some potential jurors described the chief executive, who has gained a reputation for the unpredictable, as “narcissistic”, “unpredictable” and “a little off his rocker”.
…

Musk is on the witness list for both sides of the case. An attorney for the plaintiffs told the Associated Press he would try to call Musk to the stand when the trial resumes on Friday after some other scheduled witnesses or, if time doesn’t allow, on Monday.

Not being that familiar with the workings of the stock market, I looked at what the Tesla stock price was on August 7, 2018. 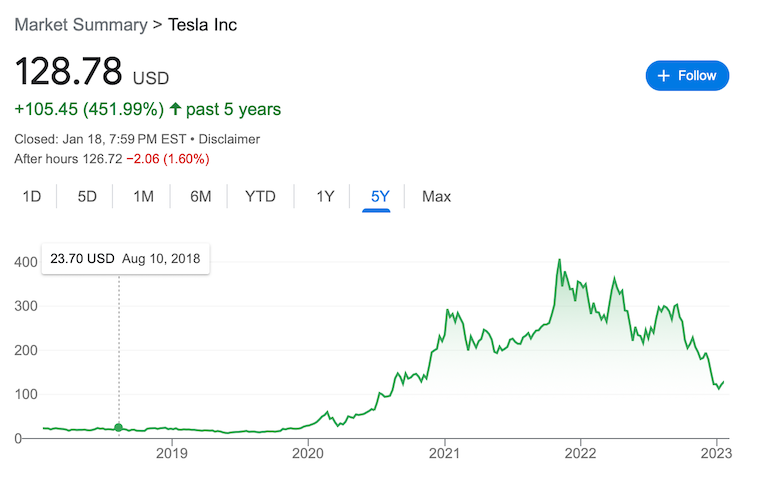 This graph seems to suggest that the share price at that time was around $20. While such stock buybacks do promise prices that are a little higher than current market values in order to induce people to sell, a factor of 20 increase was preposterous and I could not make sense of it. According to the graph, it did not start its dramatic rise until 2020, reaching the peak price of $407 only in November 2021.

Then I came across this Tweet that said that the price on that date was actually $368.

Offering a premium of $52 makes sense but this means there is something wrong with the other graph. Can anyone who is more familiar than I am with the workings of the stock market tell me what might be going on? Why is the five-year graph so wrong?

Media obsession with the British monarchy » « What is empty space?