I am aware that the sexualization of women athletes is rampant but it is ridiculous that in this day and age official sports bodies can get away with mandating that women wear revealing outfits and even punishing them for not doing so.

Norway have been fined 1,500 euros (£1,295) for wearing shorts instead of bikini bottoms at the European Beach Handball Championships.

The European Handball Federation (EHF) said it had imposed the fine because of a case of “improper clothing”.

Norway’s players wore shorts instead of bikini bottoms during a bronze medal match against Spain in Varna, Bulgaria.

Norway’s Handball Federation (NHF) had already stated it would pay if their players were fined.

Here’s what they wore. Scandalous, no? 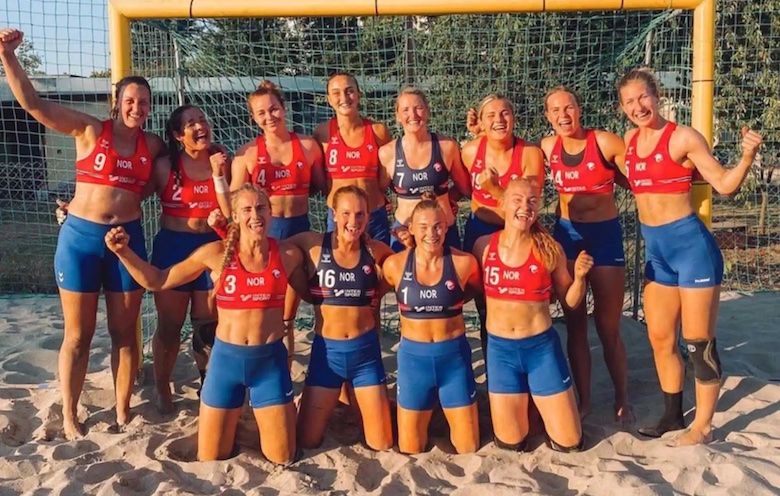 It is way beyond time for there to be a revolt and even a strike by all athletes against the requirement that they must reveal more of their bodies than they themselves choose to.

And it may be happening.

Kare Geir Lio, the head of NHF, had told news agency AFP any penalty would be paid but added: “It should be a free choice within a standardised framework.

“The most important thing is to have equipment that athletes are comfortable with.”

And following the decision to fine the players, the NHF said: “We are very proud of these girls who during the European Championships raised their voices and announced that enough is enough!

“We at NHF stand behind you and support you. Together we will continue to fight to change the rules for clothing, so that players can play in the clothes they are comfortable with.”
…

The issue has been debated in beach sports circles for several years as some players find the bikini both degrading and impractical.

Norway’s Minister for Culture and Sports, Abid Raja, tweeted after Monday’s ruling: “It’s completely ridiculous – a change of attitude is needed in the macho and conservative international world of sport.”

President of the Norwegian Volleyball Federation, Eirik Sordahl, was critical too, telling national news agency NTB: “In 2021, it shouldn’t even be an issue.”