The encouraging news is that the number of covid-19 infections and hospitalizations in the US seem to have started to decline, though the death rates are still high. Since death rates is a lagging indicator by about two weeks, we can hope that they too will begin to decline soon. This graph shows how super spreader events like Thanksgiving and Christmas caused spikes that are only just abating. 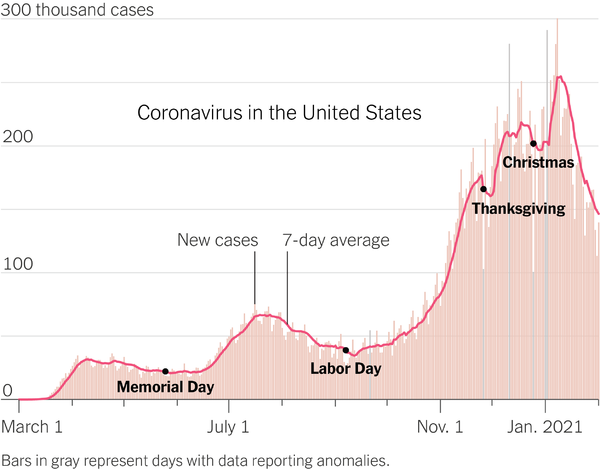 By The New York Times | Sources: State and local health agencies and hospitals

But now there is another potential super spreader event and that is the Super Bowl to be held this Sunday. A poll suggests that 25% of all Americans will be “gathering with other people that live outside of your home (i.e., with people that are not roommates/cohabitants, etc.,) to watch the upcoming Super Bowl.” 64% said no and 11% said they don’t know or have no opinion.

25% of the population is a lot. While I can sort of understand how some people feel the pull of family gatherings at Thanksgiving and Christmas to be so strong as to overcome common sense advice to just stay at home, risking one’s life to attend a party to watch a sports event on TV seems truly idiotic, especially since only half watch it to see the game with the other half split between wanting to see the commercials and the half-time show, both of which can be easily seen later.