It used to be the case that the day after the Labor day holiday in the US (which is the first Monday in September and this year falls on September 7) marked the kickoff of the presidential campaign. Of course that, like most political norms in the Trump era, has gone extinct. We are now in campaign mode all the time, so the second day of September is as good a day as any to take stock of where things stand now to set a kind of baseline and prepare for what is to come. A couple of graphs provide a good gauge of what is to come in the next 62 days before the election.

As we all know, the results of the 2016 US presidential election confounded the expectations of the polls and there have been many analyses of where and how the polls went wrong. This article looks at what seven political prognosticators were saying just hours before that election, with all predicting a Clinton win. To get a sense of the scale of the upset, look at this graphic from Time magazine on the day before the election summarizing the polling expectations, predicting Clinton would get 322 electoral college votes to 216 for Trump. 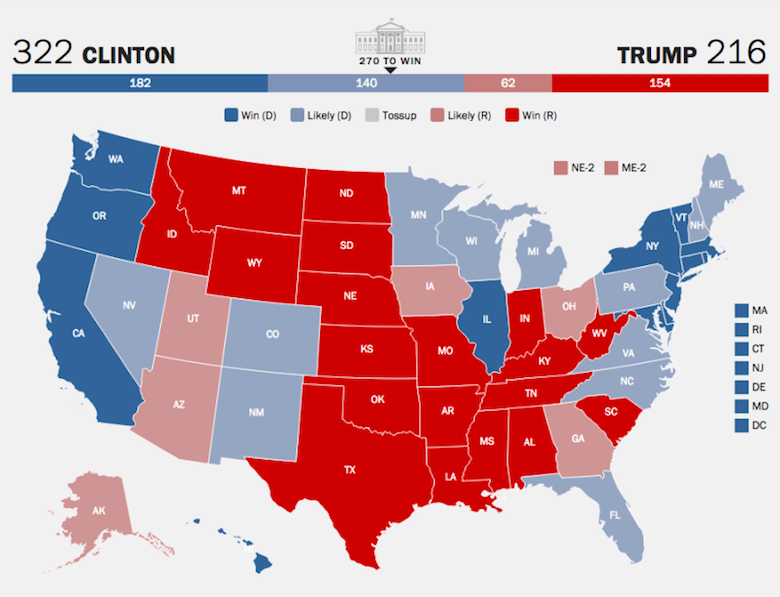 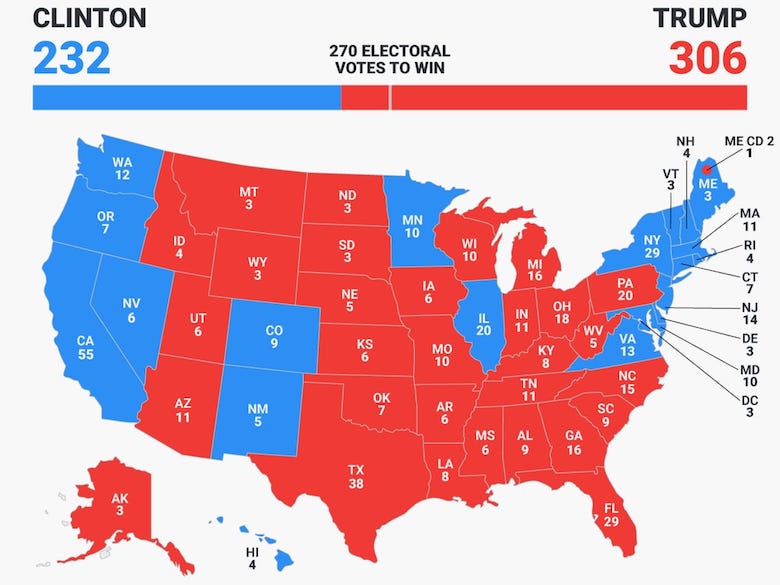 This year The Economist magazine has come up with a system for the 2020 election that tracks day-by-day and state by state and provides forecasts for the results.

Our model is updated every day and combines state and national polls with economic indicators to predict a range of outcomes. The midpoint is the estimate of the electoral-college vote for each party on election day.

Our model works by simulating 20,000 paths for the election, each time varying candidates’ vote shares to account for polling error, changes in turnout or the political environment and the effects of campaigning.

This site is pretty sophisticated and can be a time sink for poll junkies. It provides results based on the models in terms of electoral college votes as well as the probability of winning. One of the things to be aware of is that the calculations of the probability of one candidate winning can be deceptive for those who are not too familiar with statistics. For example, it might say that one candidate has a 80% chance of winning which might make some people think it is almost a sure thing when all it means is that four out of five times, the person will win. A 20% chance of losing is not small and provides absolutely no grounds for complacency.

The site has the advantage of displaying the data in a very clear manner but, as always, we should be aware of the danger of being suckered into placing too much reliance on these statistical models because when it comes to predicting human behavior in a highly volatile situation, the variability is high. Furthermore, politics has become so tense and polarized that it is not clear how willing people are to speak openly about their political preferences to pollsters.

The Economist model says that as of today Biden has an 86% chance of winning the majority of electoral college votes. However the model also says that he has a 76% chance of winning Florida but recent history has had both Florida and Texas be mirages for Democrats, each time raising hopes that changing demographics was going to turn both states blue only to find it going Republican at the end. So I am a little cynical about that particular prediction.

But while the election outcome is difficult to predict, we can be sure of one thing, and that is that Trump and the Republicans are going to indulge in a level of lies and racist fear mongering that we have not seen in our lifetimes, so brace yourselves.

The silly fuss over Danbury » « Sorry for the interruption, we resume our regular blogging