Yesterday, Donald Trump released a letter sent by him to Turkish president Recep Tayyip Erdogan warning him about dire consequences if his actions in Syria went too far, though he failed to specify what that limit was. The wording is so absurd and childish that you know that Trump himself must have authored it and he seemed very proud of the tough talk in it. It looks like a parody letter, instead of one sent by one head of state to another. You really should read it for yourself to appreciate it. 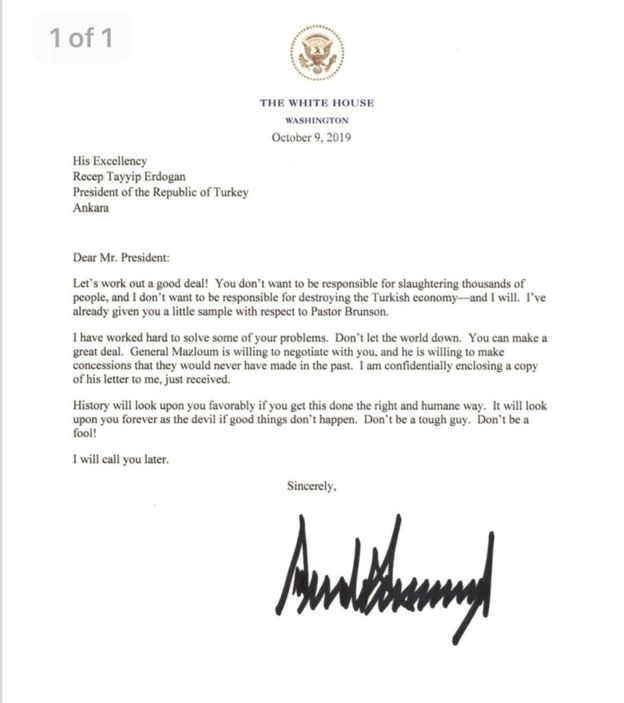 A spokesperson for the Turkish president said that Erdogan threw the letter into the trash after reading it, which does not surprise me in least. The fact that they are publicly revealing this little extra tidbit of information shows the contempt they have for Trump. Erdogan later said, “President Trump’s letter, which did not go hand in hand with political and diplomatic courtesy, has appeared in the media. Of course we haven’t forgotten it. It would not be right for us to forget it.”

But what is interesting is the date of the letter. Trump’s phone call with Erdogan was on October 6th and he announced the US withdrawal immediately after. The massive air and ground Turkish attack on the Kurds began just two days later, suggesting that the Turks had it planned all along and that the purpose of the call was for Erdogan to merely inform Trump of his decision to attack so that he could withdraw US troops from the shelling zone, rather than to consult with him and get his permission to do so. Furthermore, the attack of the Kurds went on long after the letter was received by Erdogan, showing that the Turks see Trump’s threats as utterly toothless.

The five-day ceasefire announced yesterday by vice-president Mike Pence and Erdogan, that is of course being praised by Trump as a great victory even though the ceasefire was violated almost immediately, is seen as giving Erdogan everything he wanted.

The deal appears to secure Turkey most of its military objectives, forcing America’s one-time allies in the fight against ISIS — Kurdish forces — to cede a vast swath of territory, with one senior US official very familiar with operations in Syria telling CNN that the deal meant the US was “validating what Turkey did and allowing them to annex a portion of Syria and displace the Kurdish population.”

The Turkish government is insisting that the agreement is not a ceasefire, but only a “pause” on operations in the region, reflecting Ankara’s views of the status of the Syrian Kurds.

As part of the deal, Pence said Turkey “will pause Operation Peace Spring in order to allow for the withdrawal of (Kurdish) YPG forces from the safe zone for 120 hours,” referring to Ankara’s official name for the unilateral military offensive.

Meanwhile, The Daily Show compares Trump’s effusive praise for the Kurds and the need for solidarity with them in 2018 to his casual dismissal of them this week. What is not clear is why this dramatic reversal occurred and how it came to be that it seems like Erdogan is now calling the shots.

When Trump campaigned, he said that people would get tired of all the winning that will happen when he is president. I wonder how many more of these wins he has in store for his supporters.