[UPDATE: Neil Jacobs, the acting administrator of NOAA and himself a career meteorologist facing a potentially hostile audience of weather scientists at a meeting in Huntsville, Alabama who had threatened to walk out on his talk, tried to smooth over the conflict by tearfully thanking the Birmingham scientists in the audience for their work. The semi-apology seemed to have been accepted.]

There has been much publicity over the absurdity of Donald Trump claiming that Alabama was in the path of Hurricane Dorian when it was not. National Weather Service scientists in Birmingham immediately corrected it as they should, since warning residents that they are in the path of a major storm when they are not is a serious matter. Trump then doubled down on his claim by showing a doctored NOAA (National Oceanic and Atmospheric Administration) weather map that showed Alabama in the projected path. But the most serious aspect of this was when an unsigned press release came from NOAA (the NWS is overseen by NOAA) saying that earlier forecasts did include Alabama, implicitly rebuking the NWS scientists.

This was too much for the Acting Chief Scientist of NOAA Craig McLean who issued a strong statement reminding NOAA and NWS scientists that their ethical code demands that they always provide the public with the latest and best scientific information. He then went on to condemn that press release put out by his agency.

Unfortunately, the press release of last Friday violated this trust and violated NOAA’s policies of scientific integrity. In my role as Assistant Administrator for Research, and as I continue to administratively serve as Acting Chief Scientist, I am pursuing the potential violations of our NOAA Administrative Order on Scientific Integrity. Thankfully, we have such policies that are independently cited as among the best in the federal community, if not the best. Your NOAA and OAR management and leadership team believes in these policies and principles. I have a responsibility to pursue these truths. I will.

Thank you for your continued excellent work, and your trust. Carry on.

Any bets as to how long it is before McLean is fired from his job for standing by his scientists instead of clicking his heels and reflexively supporting Dear Leader? Already commerce secretary Wilbur Ross has threatened to fire top officials of the NOAA for contradicting Trump, an attempt that has resulted in calls for him to resign

The US secretary of commerce, Wilbur Ross, is facing calls for his resignation after it was reported that he had threatened to fire senior staff at a federal agency unless they sided publicly with Donald Trump in the rumbling dispute dubbed “Sharpiegate”.

The New York Times, citing three anonymous officials, reported that Ross had called Neil Jacobs, the acting administrator of the National Oceanic and Atmospheric Administration (Noaa), last Friday and warned that heads would roll unless the agency’s disagreement with the US president over the path of Hurricane Dorian was smoothed over.
…

The commerce secretary has denied that he threatened to fire staff. A statement made to the Hill called the New York Times story false and said: “Secretary Ross did not threaten to fire any Noaa staff over forecasting and public statements about Hurricane Dorian.”

But the denial did little to quell the anxiety of top scientists at the Noaa who are dismayed that scientific findings made at the height of a severe public emergency should have been overridden in order to spare Trump’s blushes. On Monday the director of the National Weather Service, Louis Uccellini, praised the agency’s forecasters in Birmingham for having rebuffed Trumps false tweet in an effort to avoid public panic.

Who are you going to trust, the scientists at NOAA and the NWS or the liar in the White House and his lackey in the commerce department?

Tom Tomorrow sees where this will lead. 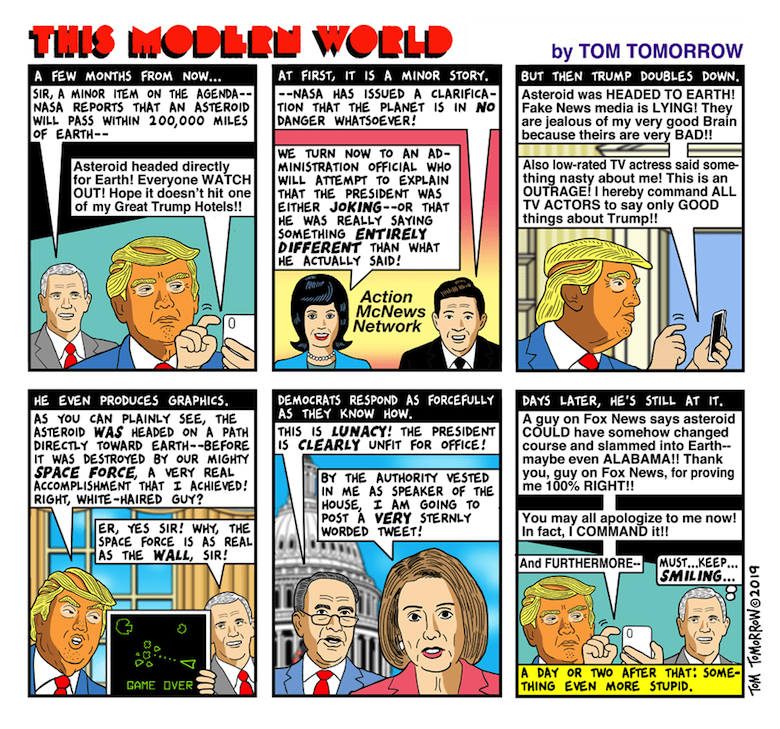 Bye, bye, John! So happy that you have been kicked out » « This is unnerving