The human rights group Amnesty International usually criticizes the behavior of foreign governments, and when it has criticized the US it is usually for its actions against civilians in other parts of the world in the many wars and other military entanglements that the US is involved in. But it has now issued a stinging report criticizing what the US is doing within its own borders.

A new report published by Amnesty International on Tuesday details a two-yearlong attack on human rights defenders, attorneys, and journalists working along the U.S.-Mexico border, calling out a pattern of escalating enforcement in violation of domestic and international law.

The U.S. “government has executed an unlawful and politically motivated campaign of intimidation, threats, harassment, and criminal investigations against people who defend the human rights of migrants, refugees and asylum seekers,” the report said, adding that both the Department of Homeland Security and the Department of Justice “have increasingly misused and leveraged the criminal justice system to deter and punish those individuals for challenging — or even simply documenting — the systematic human rights violations by US authorities against migrants and asylum seekers.”

Right on cue, as an example of the criminal justice system being misused “to deter and punish those individuals for challenging — or even simply documenting — the systematic human rights violations by US authorities against migrants and asylum seekers”, federal prosecutors yesterday announced that they are going to retry Scott Warren, the humanitarian who was charged because he provided food, water, clothes, and shelter to migrants. His first trial resulted in a hung jury. This time they have dropped the conspiracy charge and will focus on two counts of harboring migrants, which presumably they think will be easier to convict on. The fact that they are willing to waste resources on retrying this case shows how determined the government is to deter people from providing refugees with even the basic necessities to sustain life.

Meanwhile, even the office of the Inspector General of the Department of Homeland Security, has issued a report saying that the “DHS Needs to Address Dangerous Overcrowding and Prolonged Detention of Children and Adults in the Rio Grande Valley”. Here are photographs from the report. 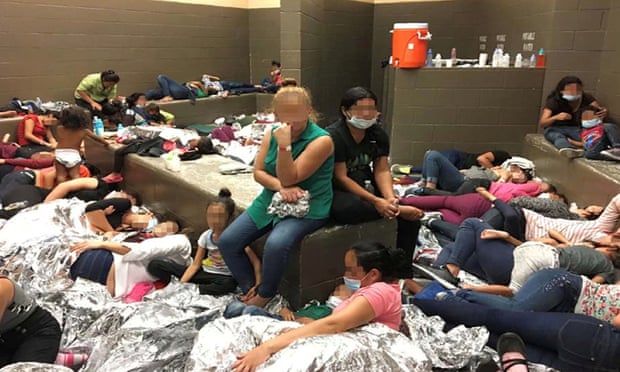 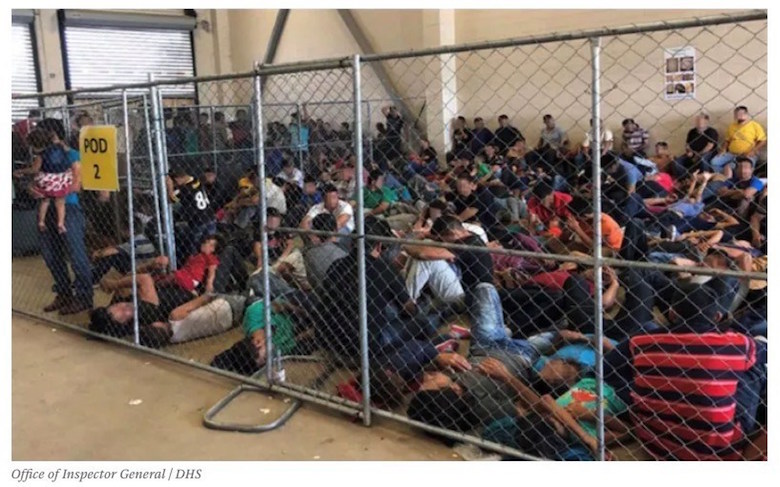 This news item summarized some of the findings in the report.

One image shows a man squashed in a crowd pressing a cardboard sign to a cell window with the word “help” written on it. He is one of 88 men in a cell meant for 41.

“During the week of June 10, 2019, we traveled to the Rio Grande Valley in Texas and again observed serious overcrowding and prolonged detention in border patrol facilities requiring immediate attention,” the report says. A previous report issued in May had also warned about “dangerous overcrowding” at facilities in the El Paso facilities.

In one photo from the new report, women and children can be seen sleeping on the floor with only Mylar blankets for cover. Several people are wearing surgical masks.

Women held at the facility were “crammed into a prison-like cell with one toilet, but no running water to drink from or wash their hands”, Castro tweeted after the visit. Some had been separated from their children and held for more than 50 days, he said.

“[S]ome single adults were held in standing room only conditions for a week“? How cruel is that?

The trip was seen as a simple fact-finding mission for members of Congress to view conditions at the border. But within hours of their arrival in Texas to tour facilities, the visit had turned into a fiasco for US Customs and Border Protection.

If the aim of the authorities had been to paint a sanitized vision of conditions at facilities that have created negative headlines around the world, it went wrong from the start.
…

Faced with the public relations catastrophe, border officials moved into damage control. The inspector general of the Department of Homeland Security has said it will conduct an independent investigation into the Facebook group revealed by ProPublica.

Fox News has been working relentlessly to spin this humanitarian disaster as being highly overblown. They publicized a visit by a group of evangelical pastors to the centers and said that what they saw showed the detainees being treated well.

“I read the reports, saw the news clips. I just wanted to see what was actually happening in order to better enable our efforts to find a fair and a just solution to our broken immigration system,” Rodriguez, who has advised President Trump and both Presidents Barack Obama and George W. Bush on immigration reform, noted. “To my surprise, I saw something drastically different from the stories I’ve been hearing in our national discourse. Even as a veteran of immigration advocacy in the U.S., I was shocked at the misinformation of the crisis at the border.”
…

“We found no soiled diapers, no deplorable conditions and no lack of basic necessities,” Rodriguez remarked, adding he specifically asked border agents if they staged the facility in response to the negative press. “They unequivocally denied it — we were witnessing the identical conditions the attorneys saw when they toured the facility days earlier.”

In fact, some told him the sources from whom the negative coverage originated “never toured the areas of the facility that we toured” and speculated they might have had political motivations.

So these Christian pastors accepted at face value the CBP statements that they were not given a Potemkin village tour of the facility. That alone tells you the value of their testimony. I wonder what they will say about this report from the DHS’s own inspector general’s office.

Trump might suggest Ivanka to head the IMF » « Populism vs. populism