Yet another damning report has been issued by a group of layers and doctors who had visited a large detention facility for children run by the CBP and described what they saw.

A two-year-old boy locked in detention wants to be held all the time. A few girls, ages 10 to 15, say they’ve been doing their best to feed and soothe the clingy toddler who was handed to them by a guard days ago. Lawyers warn that kids are taking care of kids, and there’s inadequate food, water and sanitation for the 250 infants, children and teens at the Border Patrol station.
…

Three girls told attorneys they were trying to take care of the two-year-old boy, who had wet his pants and no diaper and was wearing a mucus-smeared shirt when the legal team encountered him.

Law professor Warren Binford, who is helping interview the children, said she couldn’t learn anything about the toddler, not even where he’s from or who his family is. He is not speaking.

Binford described that during interviews with children in a conference room at the facility, “little kids are so tired they have been falling asleep on chairs and at the conference table”.

She said an eight-year-old taking care of a very small four-year-old with matted hair couldn’t convince the little one to take a shower.

“In my 22 years of doing visits with children in detention I have never heard of this level of inhumanity,” said Holly Cooper, who co-directs University of California, Davis’ Immigration Law Clinic and represents detained youth.
…

Children told lawyers that they were fed oatmeal, a cookie and a sweetened drink in the morning, instant noodles for lunch and a burrito and cookie for dinner. There are no fruits or vegetables. They said they had gone weeks without bathing or a clean change of clothes.

Mind you, this facility had three weeks notice that this visit was to take place and even though the authorities tried to clean things up just before the visit (some children were allowed showers after weeks of being denied them), the conditions were still horrible. One can only imagine what things were like before the ‘clean up’.

After the visitors spoke to the media exposing the horrors, CBP abruptly removed most of the children to an undisclosed location before suddenly bringing 100 of them back again. No reasons were given for this.

This particular facility is run by the CBP but a news report says that some private facilities charge $775 per person per day for every child in their custody. For that kind of money, those children and the detention staff could be housed in luxury hotels.

Yesterday (June 25), the public radio program On Point devoted its entire show to this topic and spoke to some of the visitors to the shelter who described what they had seen and were so shocked that they decided to go public immediately. The program invited the CBP and its parent agency the Department of Homeland Security to appear on the show but the refused, instead issuing a boilerplate memo saying in effect that they were doing their best.

John Sanders, the acting commissioner of the Customs and Border Protection agency that has been blasted for the appalling treatment meted out to detained migrant families and children, abruptly resigned yesterday. He did not give a reason but after patting himself and the CBP on the back for their many “accomplishments” he ended by telling the employees of the CBP to “Take care of each other”. Surely he should have asked them to take care of the children instead? It appears that Mark Morgan, currently head of the awful Immigration and Customs Enforcement (ICE) agency is the person who has been appointed to take the place of Sanders and he has even harder line views than Sanders, if you can believe it, so await even more horror stories.

I think it should be obvious that the cruelty that is on display is no accident but deliberate, designed to warn would-be migrants of what is in store for them. It is what this allegedly Christian nation thinks that Jesus would do, taking Jesus’s words “Suffer little children” literally and out of context.

Meanwhile, we have the usual right wing distraction techniques about whether the detention facilities can be called concentration camps, a term that academics feel is perfectly justified. 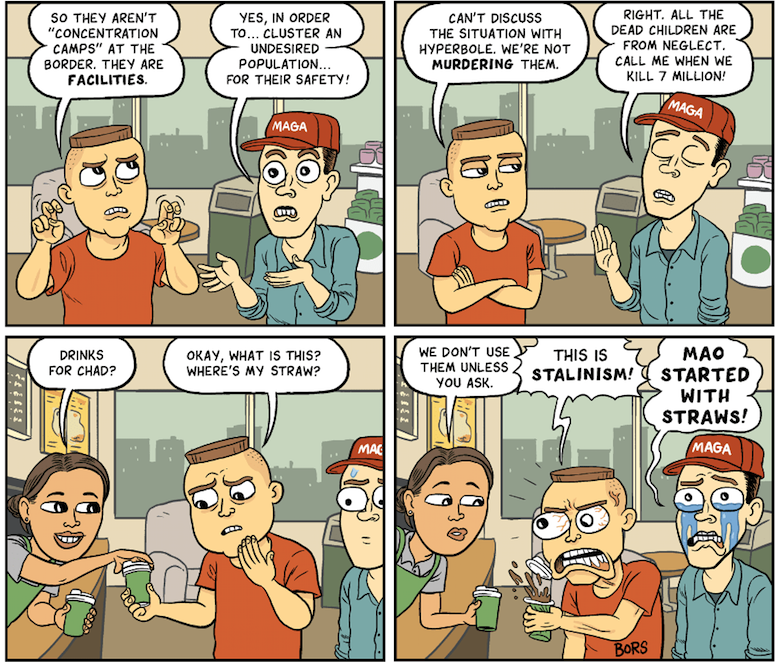