On Monday, the British parliament will votes on a new set of indicative votes, hoping to find one that contains the elusive formula that can gain a majority that will pass as a legislative option, after the previous such exercise sent all the options to defeat. It now appears that Theresa May is also planning to put forward her thrice (or twice depending on how you view the third vote) defeated Brexit plan to parliament for a fourth vote later in the coming week. This time she has upped the stakes and threatened to call for a general election if it fails, no doubt hoping that the fear of Jeremy Corbyn winning the election and becoming prime minister will scare the hell out of all the Conservatives and neoliberals within the Labour to vote to pass her plan.

But given the rules of parliament, if her plan fails she cannot call for an election on her own but needs a two-thirds vote in parliament and many Conservatives are threatening to rebel and vote against such a motion. The Labour party has been calling for an election but I think it unlikely that she will put herself in the position of having to largely depend on the opposition to pass a motion that she advances. It would be the ultimate humiliation even for someone for whom humiliation has become almost a daily ritual.

This flowchart describes the options as things stand today. 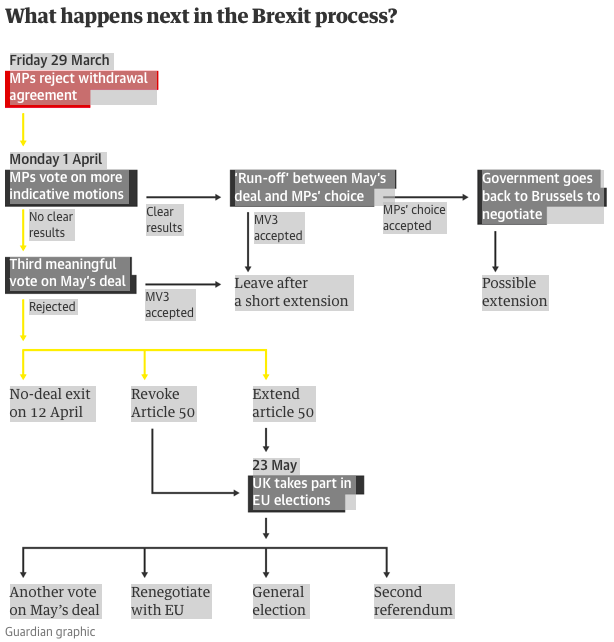 When there is complete and utter breakdown like this, one needs something that restores clarity. But who or what can provide it? Ordinarily an election is the solution to get a mandate on such a divisive issue. But that would only hold true if one major party were strongly for Leave and the other strongly for Remain. But that is not the case here, at least at this moment. It seems like both parties would campaign on who was better able to negotiate a deal, a path that seems unpromising if one seeks clarity. Both major parties are also internally divided into warring factions, especially the Conservatives, with long-time party members facing the wrath of their constituents for not backing the Leave position. The passion of the Leave voters reminds me strongly of the Tea Party and Trumpists.

A second referendum may be better at arriving at a decisive result but that would depend on what the winning referendum question was. If the vote is to Remain, that would be at least clear and decisive. If the vote was to Leave again with no precise guidelines given for what the deal should include, we would be back to where we are now, except that there would be much more pressure to hammer out any deal at all, however bad.

Atheism and agnosticism in Asia » « The history of Brexit through yoga