In the latest maneuvering over Brexit in the British parliament, the MPs voted by a margin of 329 to 302 to seize control of the agenda and vote on a series of ‘indicative’ measures on Wednesday that would tell the government what are the things that it can support. This measure was in direct defiance of the government which normally controls the parliamentary agenda and 29 Conservative MPS voted for this measure, defying the government whip.

And because I cannot get enough of Speaker Bercow announcing results, here he is doing so again.

This is the latest indicator of prime minister Theresa May’s ineffectiveness. While she has indicated that she does not have the votes to pass her deal the third time around, she is clearly annoyed by being further sidelined and is not committing to pushing for the results of the indicative votes either.

The prime minister had earlier declined to say whether she would abide by the outcome of a process of “indicative votes”.

The government issued a punchy statement after the amendment passed, warning that it “upends the balance between our democratic institutions and sets a dangerous, unpredictable precedent for the future”.
…

The prime minister earlier announced that she did not yet have the support to justify holding a third meaningful vote on her deal, but insisted she would not hand parliament a “blank cheque” to decide what happened next.

The implications of this move are discussed in this article.

On Wednesday, MPs will hold a series of votes on a variety of possible Brexit solutions, for example leaving with May’s deal; leaving with membership of a customs union and/or single market; a no-deal departure; a second referendum. The various possible options and the form of voting are yet to be confirmed.

Ardent Brexiteers think that this parliamentary move is a precursor to scuttling Brexit altogether.

It is not clear that voting on piecemeal elements of a complex process like Brexit will produce anything workable in the end. It seems to assume that the deal can be split into independent components and then those that pass can be stitched together to make a workable whole. But it is also possible that the passed elements could be mutually contradictory.

Meanwhile over a million people marched in London on Saturday urging the UK to stay in Europe. Of the many amusing posters and placards on display, I particularly liked this one. 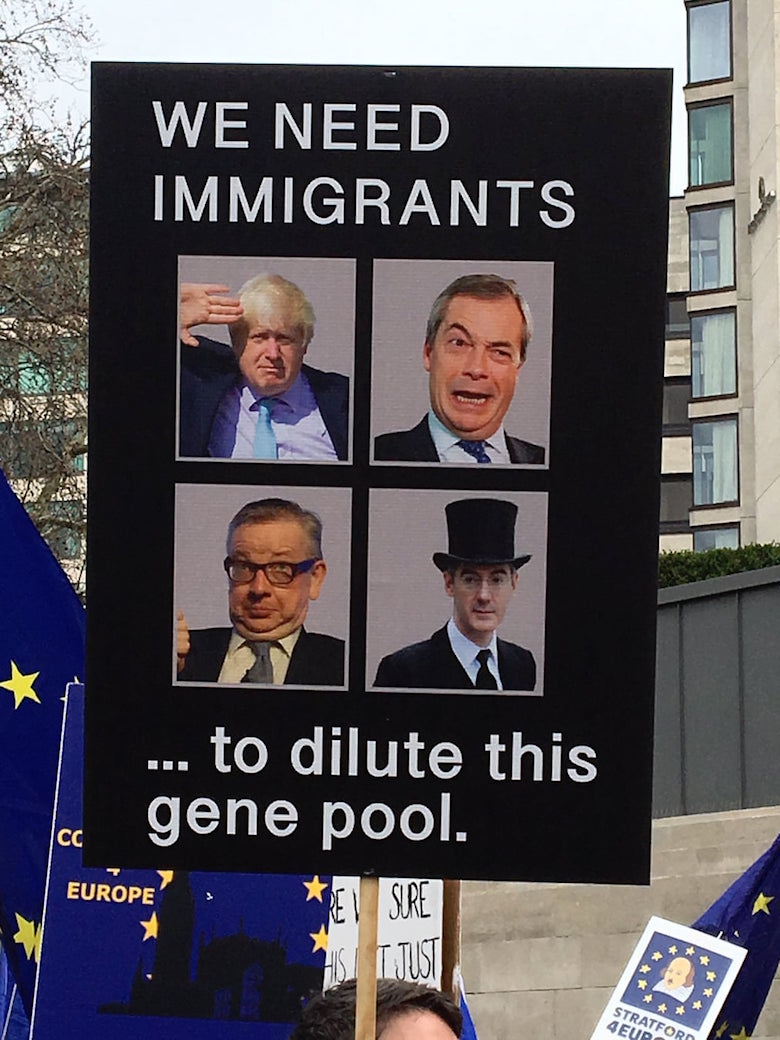 It reminded me of the upper class twits that Monty Python loved to lampoon.

Faux journalist Jonathan Pie has another segment where he blames the current mess on the government breaking an implicit social contract. (Language advisory)