I expect that most people have seen this photo that shows shipping containers blocking a bridge. 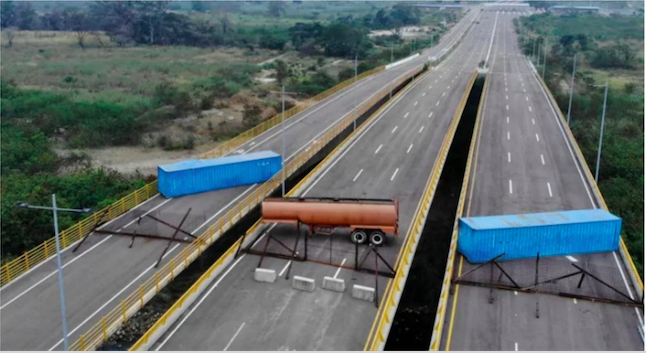 Western media reports have said that these containers were placed by Venezuelan president Nicholas Maduro across the Santander bridge connecting Venezuela to Colombia to prevent food and medicines and other humanitarian aid from reaching the people there. The photo has been widely used to depict Maduro as a callous leader willing to see Venezuelans suffer rather than acknowledge that the country is facing serious shortages. The US government promoted this and the media obligingly repeated it unquestioningly

That is a lie.

While the containers were placed by the Venezuelan government, the bridge itself has never been used since its construction in 2016 and there had always been concrete blocks and fences blocking it. To its credit, the Canadian Broadcasting Corporation (CBC) acknowledged that it had been taken in by US government propaganda and published a detailed apology and explanation.

The bridge, which spans between Cucuta, Colombia, and the town of Pedro Maria Urena in Venezuela, hadn’t been open for years. In fact, it’s never been open.

On Feb. 6, U.S. Secretary of State Mike Pompeo sent a tweet [with that photo-MS] that drew a lot of attention.
…

The tweet helped back the U.S. position that Maduro is no longer the legitimate president and must go.

But what Pompeo didn’t say in his tweet – and what many news organizations, including CBC News, didn’t report – was that the bridge in the tweet has never been open to traffic.

Construction of the bridge was finished in 2016, amid already heated tensions between the two countries. But Colombian and Venezuelan authorities could not reach an agreement to open it. Nearby bridges were already being used to smuggle in goods and fuel from Colombia to Venezuela

What about the other viral photos that purported to show that forces loyal to Maduro were deliberately setting fire to aid convoys, destroying food and medicine supplies, further evidence of the callousness of the Venezuelan government?

Independent journalists on the ground reported that very day that the groups setting the trucks on fire were those opposed to the Maduro government. But on Saturday, the New York Times finally got around to acknowledging that their initial reporting was based on a false story put out by the US government. As Glenn Greenwald writes:

While the NYTs article and video are perfectly good and necessary journalism, the credit they are implicitly claiming for themselves for exposing this lie is totally undeserved. That’s because independent journalists – the kind who question rather than mindlessly repeat government claims and are therefore mocked and marginalized and kept off mainstream television – used exactly this same evidence on the day of the incident to debunk the lies being told by Rubio, Pompeo, Bolton and CNN.

On February 24, the day the lie spread, Max Blumenthal wrote from Venezuela, on the independent reporting Grayzone site, that “the claim was absurd on its face,” noting that he “personally witnessed tear gas canisters hit every kind of vehicle imaginable in the occupied Palestinian West Bank, and I have never seen a fire like the one that erupted on the Santander bridge.” He compiled substantial evidence strongly suggesting that the trucks were set ablaze by anti-Maduro protesters, including Bloomberg video showing them using Molotov cocktails, to express serious doubts about the mainstream narrative.

Greenwald looks at the large amount of evidence that the US media ignored in its rush to promote the US government’s version of events.

What about the story that the Maduro government has stopped all aid coming in?

The Maduro government is allowing aid in, just not from countries like the US and its allies that have openly called for a coup to overthrow the government.

The Venezuelan government has allowed substantial amounts of aid into their country from countries that have not threatened to overthrow the President with an external coup; Maduro has only blocked trucks and planes from entering that come from those countries (the U.S, Brazil, Colombia) that have been threatening Venezuela, something any country would do.

Indeed, both the Red Cross and the United Nations expressed concerns about “humanitarian aid” from the U.S. on the ground that it was a pretext for regime change and would politicize humanitarian aid). Even NPR recognized that “the U.S. effort to distribute tons of food and medicine to needy Venezuelans is more than just a humanitarian mission. The operation is also designed to foment regime change in Venezuela – which is why much of the international aid community wants nothing to do with it.”

The point is that all these facts are not obscure. They were easily verifiable with minimal investigation and indeed had been reported immediately by independent journalists on the ground. But the US media ran with the story they were given by the US government even though they have been proven to be blatant liars so many times in the past. This has happened too often to be viewed as an accident. It has to be policy.

You have to be fucking joking with this tweet. It was CNN – the outlet where you work – that led the way in spreading this lie all over the world. CNN claimed it saw with its own eyes something that never happened. It ignored all the evidence presented weeks ago proving this lie: https://t.co/HzVSTRnlvx

And now we have news that the electricity grid has shut down. The Maduro government says that it is due to sabotage by the US while the US says it is due to their incompetence. But we know that the US has the ability to wage cyberwarfare, as was seen in the US-Israeli deployment of the Stuxnet virus to damage Iranian centrifuges, and would be eager to test its capability to do so on a country that it has successfully demonized. So it is perfectly plausible that the grid breakdown is a US operation. It should be remembered that destroying the civilian infrastructure of a country (its electricity, water, sewage systems etc.) is a war crime because it creates immense civilian suffering and deaths. But given the demonization of the Venezuelan government, one is unlikely to hear congressional calls for an investigation into whether the US intelligence agencies were responsible. We will have to wait decades for official reports to be revealed.

Do not look to the mainstream media for a close examination either. As Greenwald says:

As it always does – as it always has done from its inception when Wolf Blitzer embedded with U.S. troops – CNN led the way in not just spreading these government lies but independently purporting to vouch for their truth. On February 24, CNN told the world what we all now know is an absolute lie: that “a CNN team saw incendiary devices from police on the Venezuelan side of the border ignite the trucks,” though it generously added that “the networks journalists are unsure if the trucks were burned on purpose.”

Other media outlets endorsed the lie while at least avoiding what CNN did by personally vouching for it. “Humanitarian aid destined for Venezuela was set on fire, seemingly by troops loyal to Mr Maduro,” The Telegraph claimed. The BBC uncritically printed: “There have also been reports of several aid trucks being burned – something Mr Guaido said was a violation of the Geneva Convention.”
…

What we have here is classic Fake News – spread on Twitter, by U.S. officials and U.S. media stars – with the clear and malicious intent to start a war. But no western proponents of social media censorship will call for their accounts to be cancelled nor call for their posts to be deleted. That’s because “Fake News” and the war against it is strictly a means of combating propaganda by U.S. adversaries; the U.S. and its allies maintain extensive programs to spread Fake News online and none of those anti-Fake News crusaders call for those to be shut down.

And the next time claims are made about Venezuela designed to fuel regime change and wars, the independent journalists and analysts who were absolutely right in this instance – who recognized and documented the lies of the U.S. Government weeks before the New York Times did – will again be ignored or, at best, mocked. Meanwhile, those in the media and Foreign Policy Community who uncritically amplified and spread this dangerous lie will be treated as the Serious People whose pronouncements are the only ones worth hearing. With rare exception, dissent on Venezuela will continue to be barred.

That’s because the U.S. media, by design, does not permit dissent on U.S. foreign policy, particularly when it comes to false claims about U.S. adversaries. That’s why skeptics of U.S. regime change in Venezuela, or dissenters on the prevailing orthodoxies about Russia, have largely been disappeared from mainstream media outlets, just as they were in 2002 and 2003.

That’s not because U.S. media stars are ordered to do this. They don’t need to be ordered. They know propaganda is their job. More to the point, they are über-patriotic jingoists who revere U.S. officials and thus do not possess a single cell of critical thinking in their brain.

These belated corrections are the media’s way of absolving themselves of their sins. They know that most people pay attention to the first inflammatory stories and only the wonks follow the independent journalists and note the later corrections. The US government has achieved its purpose of demonizing the Maduro government so that any coup will be hailed and even an outright invasion of that country will be portrayed a s a ‘liberation’ instead of a naked act of aggression. That is how it has been done in the past and will be done again in the future.

Greenwald links to a three-minute clip of Noam Chomsky being interviewed by a BBC reporter that captures perfectly how the western media propaganda system works. Note how Chomsky patiently explains, as if to a child, how the reporter has been selected by the filtering system to play the propagandist role he is now playing.