You should not become bankrupt just because you get sick. That seems to me to be an obvious requirement for any civilized society. But that is not the case in the US. As a new study of bankruptcy court filings reveal, medical expenses are the most common cause of bankruptcies in the US. This has been true for some time and it is significant that the Affordable Care Act (known popularly as Obamacare) has not changed the numbers.

Medical problems contributed to 66.5% of all bankruptcies, a figure that is virtually unchanged since before the passage of the Affordable Care Act (ACA), according to a study published yesterday as an editorial in the American Journal of Public Health. The findings indicate that 530,000 families suffer bankruptcies each year that are linked to illness or medical bills.

The study, carried out by a team of two doctors, two lawyers, and a sociologist from the Consumer Bankruptcy Project (CBP), surveyed a random sample of 910 Americans who filed for personal bankruptcy between 2013 and 2016, and abstracted the court records of their bankruptcy filings. The study, which is one component of the CBP’s ongoing bankruptcy research, provides the only national data on medical contributors to bankruptcy since the 2010 passage of the ACA. Bankruptcy debtors reported that medical bills contributed to 58.5% of bankruptcies, while illness-related income loss contributed to 44.3%; many debtors cited both of these medical issues.
…

In the article, the authors note that “medical bills frequently cause financial hardship, and the U.S. Consumer Financial Protection Bureau reported that they were by far the most common cause of unpaid bills sent to collection agencies in 2014, accounting for more than half of all such debts.”

It is bad enough to suffer from a serious illness. It causes pain and stress not just for the person who is ill but their caregivers as well. You should not also have to worry about whether you can pay for the medical treatment. The only way out of this nightmare faced by many people is a single-payer universal health care system.

Tom Tomorrow has his say. 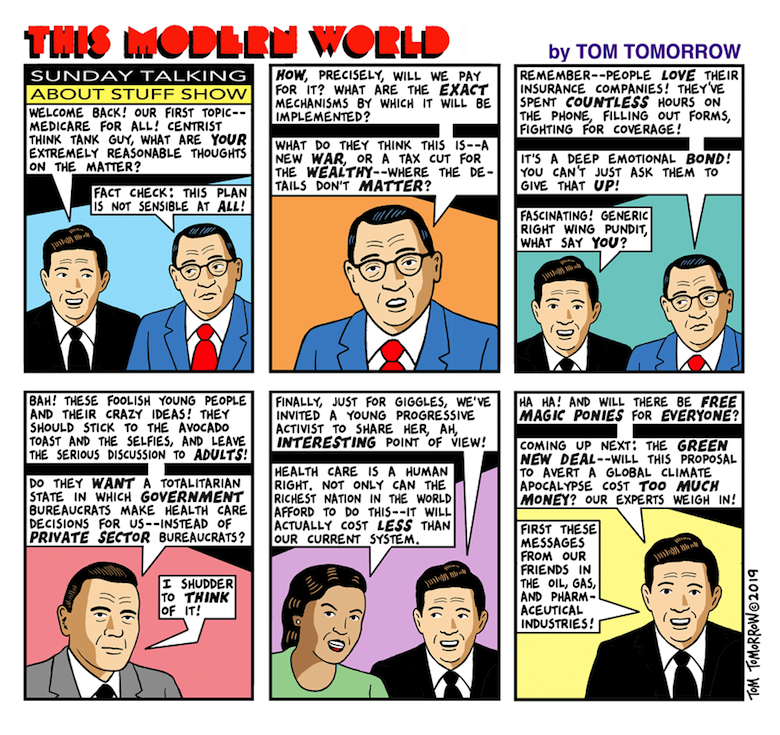