I am always on the lookout for interesting pieces of historical trivia and how the famous peace symbol came into existence certainly qualifies. It turns out that it was created in 1958 by Gerald Holtom by superimposing the international semaphore alphabet signals for ‘N’ and ‘D’ so that the symbol represents ‘Nuclear Disarmament’. 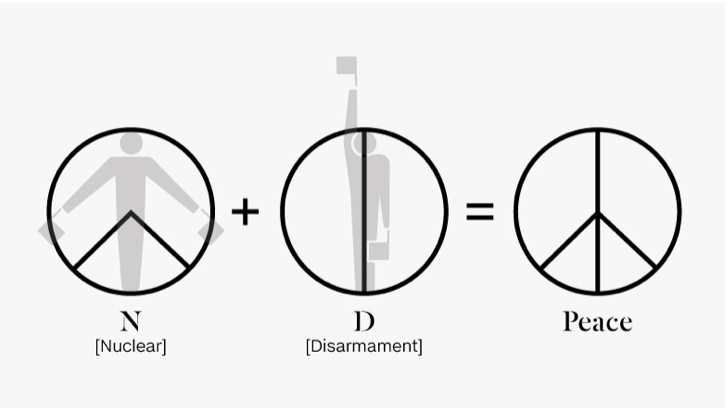 On Good Friday 1958, thousands gathered in London’s Trafalgar Square to protest nuclear weapons. They were responding to a string of test blasts conducted by the United Kingdom, the third nation to join the nuclear club after the US and USSR.

For the next four days, the bravest among them marched to Aldermaston, a small village 50 miles west of London where British nuclear weapons were designed and stockpiled.

On the protesters’ signs and banners, a new symbol was making its first appearance. Gerald Holtom, a designer and a pacifist, had developed it specifically for the march just a few weeks prior. He believed that a symbol would make the message stronger.

He was right: The symbol was adopted soon after by the Campaign for Nuclear Disarmament (CND) and went on to become one of the most widely recognized designs in history.

“It’s a minor masterpiece with major evocative power,” said design guru and cultural critic, Stephen Bayley, in an email. “It speaks very clearly of an era and a sensibility.

“It is, simply, a fine period piece: the ordinary thing done extraordinarily well.”

The symbol has a strong similarity to the Mercedes Benz emblem (that has resulted in some satire about how people mistakenly used one for the other) and I wonder if the car company ever considered suing for copyright infringement. Of course, this was in 1958 not long after the Nazis had been defeated in World War II and a German company’s efforts to suppress a peace symbol may not have been viewed as the wisest public relations move.

Film review: BlacKkKlansman (2018) (no spoilers) » « The new political template based on Mississippi, Florida, and Georgia