Nir Shafir is a historian of the early modern Ottoman Empire at the University of California, San Diego. In preparing to teach his class on Science and Islam he was looking at some books and discovered something about the illustrations that seemed a little off.

As I prepared to teach my class ‘Science and Islam’ last spring, I noticed something peculiar about the book I was about to assign to my students. It wasn’t the text – a wonderful translation of a medieval Arabic encyclopaedia – but the cover. Its illustration showed scholars in turbans and medieval Middle Eastern dress, examining the starry sky through telescopes. The miniature purported to be from the premodern Middle East, but something was off.

Besides the colours being a bit too vivid, and the brushstrokes a little too clean, what perturbed me were the telescopes. The telescope was known in the Middle East after Galileo invented it in the 17th century, but almost no illustrations or miniatures ever depicted such an object. When I tracked down the full image, two more figures emerged: one also looking through a telescope, while the other jotted down notes while his hand spun a globe – another instrument that was rarely drawn. The starkest contradiction, however, was the quill in the fourth figure’s hand. Middle Eastern scholars had always used reed pens to write. By now there was no denying it: the cover illustration was a modern-day forgery, masquerading as a medieval illustration.

He says that this is not the only example of the deliberate forging of supposedly old illustrations, the intent of which seemed to suggest that Islamic scholars had anticipated modern scientific results. He says that one can find plenty of such miniatures and objects that seem to originate mostly in Istanbul in Turkey. Some have even entered the collections of established museums.

So what is behind this effort?

What drives the spread of these images and objects is the desire to use some totemic vision of science to redeem Islam – as a religion, culture or people – from the Islamophobia of recent times.
…

With these ideals in mind, do the ends justify the means? Using a reproduction or fake to draw attention to the rich and oft-overlooked intellectual legacy of the Middle East and South Asia might be a small price to pay for widening the circle of cross-cultural curiosity. If the material remains of the science do not exist, or don’t fit the narrative we wish to construct, then maybe it’s acceptable to imaginatively reconstruct them.
…

However, there is a dark side to this progressive impulse. It is an offshoot of a creeping, and paternalistic, tendency to reject the real pieces of Islamic heritage for its reimagined counterparts. Something is lost when we reduce the Islamic history of science to a few recognisably modern objects, and go so far as to summon up images from thin air.

Grafton ultimately sides with the critic: the forger, he says, is fundamentally ‘irresponsible; however good his ends and elegant his techniques, he lies. It seems inevitable, then, that a culture that tolerates forgery will debase its own intellectual currency, sometimes past redemption.’ As fakes and fictions enter our digital bloodstream, they start to replace the original images, and transform our baseline notions of what actually was the science of the past. In the case of the false miniatures, many are painted on the ripped-out pages of centuries-old manuscripts to add to their historicity, literally destroying authentic artefacts to craft new forgeries.

I am reminded of this old cartoon from Jesus and Mo, though this kind of ‘prediction’ from their scriptures is not limited to Islam. 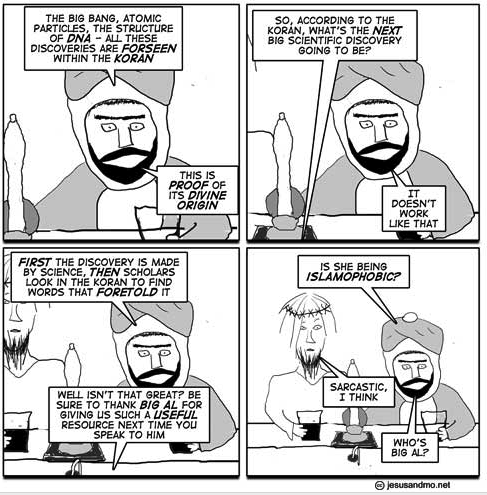 To engage or not to engage with racists? » « Henrietta Swan Leavitt: An ignored and forgotten scientist