I had expected Alexandria Ocasio-Cortez to be attacked by the political-business-media establishments for her progressive views, for calling herself a democratic socialist, and for her highlighting of the deaths of dozens of protestors in Gaza at the hands of Israeli Defense Forces. The loss of her opponent, incumbent Joe Crowley is being mourned by lobbyists and business-friendly pundits, though Crowley himself was extremely gracious to her in conceding his loss.

“If you are in business, if you are watching this from a financial perspective,” said Politico reporter Ben White on CNBC, “it means a Democratic House is going to be liberal, more inclined to block the president.” White predicted that Democrats would move more aggressively now to repeal President Donald Trump’s tax cuts and oppose the administration’s deregulatory agenda.

Several Democratic pundits appeared on Fox Business Network to raise the alarm about the election. “The party is swinging left,” said Robin Biro, a former Democratic National Committee delegate who supported Hillary Clinton. “It’s concerning for someone who is more moderate like myself.”
…

As The Intercept reported, Crowley helped spearhead efforts against bank regulations, and, as a longtime leader of the New Democrat Coalition, was widely viewed as a point person for lobbyists to influence that caucus of centrist Democrats. He also voted in support of the Iraq War and the Patriot Act.

Matt Bennett, co-founder of Third Way, a business-friendly Democratic think tank governed by a council of finance industry executives, told Axios that Crowley lost because of his gender and the particular dynamics of the district. Ocasio-Cortez’s victory “had more to do with the nature of her very blue district than it does with national politics,” Bennett said.

I am impressed that the critics are so quick out of the gate, barely two days after the election. Here is the headline of an article in the conservative Washington Times and an accompanying photo. 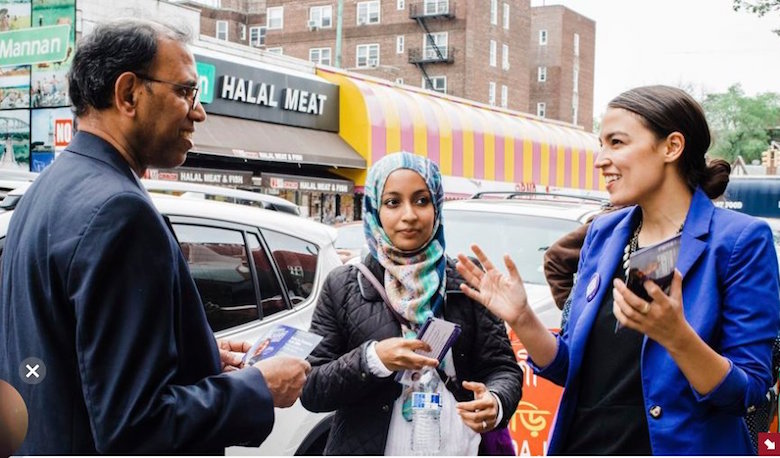 You’ve got to hand it to whoever who took this picture. They not only managed to get in one frame a woman in traditional Islamic clothing and a dark skinned man chatting in a friendly manner with her, clearly making her a terrorist sympathizer if not a terrorist herself, they also managed to include a store whose sign says that they sell halal meat.

But we should not overlook another important piece of news yesterday and that is that the bylaws committee of the Democratic National Committee has by a vote of 27-1 recommended that the party change the rules so that the infamous unelected super-delegates will have a reduced role in selecting the party’s nominee for president, by barring them from voting in the first round of balloting. These super-delegates typically vote for the establishment candidate and so that person has a huge advantage even before a single vote is cast.

Nomiki Konst, a Sanders appointee to the DNC’s Unity Reform Commission, similarly praised the DNC’s move to limit superdelegates’ power in a series of tweets late Wednesday, attributing the nearly unanimous vote to a wave of grassroots activism that began during the 2016 Democratic presidential primary, when progressives recognized the way in which the system tilted the scales in favor of Hillary Clinton over Sanders’ insurgent campaign.
…

“No candidate should have an accumulated lead, whether real or perceived, before a first ballot is cast,” DNC chair Tom Perez said during a conference call about the new rule on Wednesday. “We have to make sure that we rebuild the trust among many who feel alienated from our party.”

Stephen Colbert praises Ocasio-Cortez’s win and says that she will be on his show today.