Articles like to use photographs to liven up their appearance. But getting your own photographs is time-consuming and expensive so many publications resort to using stock images from the various sources that provide them and that can be easily searched on to provide one that seems to most closely fit the needs of the article. But Adam Jonson at FAIR (Fairness & Accuracy in Reporting) has noticed that not enough care seems to go into selecting images and that, for example, a single trope tend to dominate in reports about Iran that perpetuate myths about that country.

One of the most overused and toxic stock photos – and one that highlights perfectly this genre of image making – is the “Woman in Chador Walks by Anti-US Mural” image accompanying countless stories about US/Iran relations. In several variants, the photo shows one or two Iranian women clad in black chadors, faces usually barely visible, walking past a mural of the Statute of Liberty with a skull face. 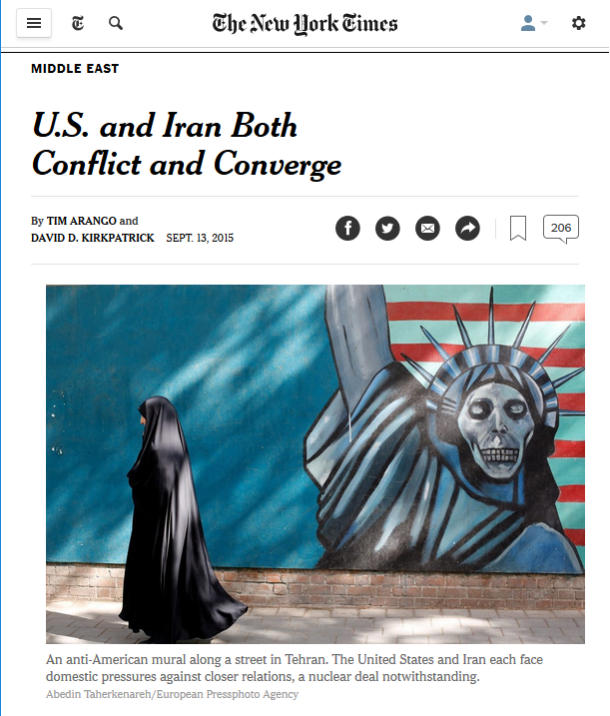 Johnson shows multiple examples of the same image or slight variations accompanying articles on Iran and says that they feed damaging stereotypes.

These photos have been used constantly for years, in dozens of articles. The point of the image is to lazily tie together US-bashing and perceived subjugation of women, reinforcing the image of Iran as a country defined by misogyny and seething hate for the West.

This isn’t, of course, to say that Iran does not have popular and common displays of anti-US rhetoric – or, for that matter, that such rhetoric doesn’t have much historical basis. Such murals do exist – the one pictured most frequently adorns the former US embassy in Tehran – but their existence is only 0.01 percent of a broader picture of Iran, and the fact that they’re used nonstop to define a country of 80 million tells us how much of the media’s Iran coverage is on ideological autopilot: They hate us – and here’s an image that conveys this, while pandering to orientalist stereotypes.

Johnson says that there are other stock photos that can be used and provides examples such as the one below that also features a woman in front of a mural but conveys a very different sensibility. 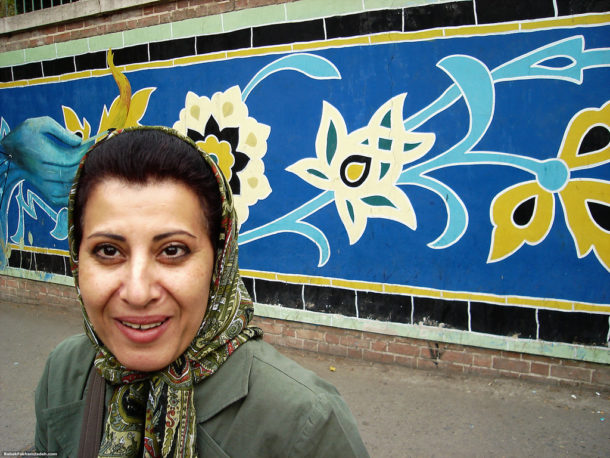