The ocean off the southern coast of Sri Lanka sees regular visits of large pods of sperm whales and orcas (killer whales) sometimes numbering as many as 350. This attracts both tourists and marine biologists who study these huge animals. Sperm whales eat a diet that consists mostly of squid while the orcas are meat eaters that will kill and eat sperm whales if they can. 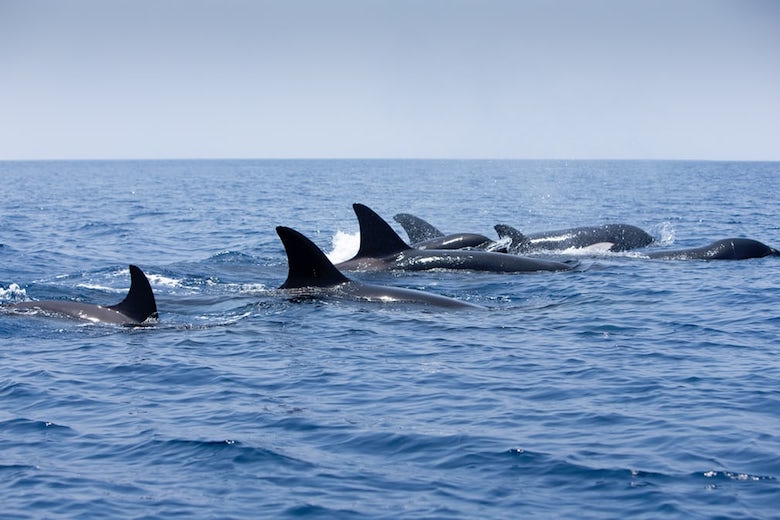 A friend of mine who is an avid diver sent me this article that consists of a photo gallery of an encounter when about 100 sperm whales came under attack from eight orcas. It shows the various strategies used by the sperm whales to fend off the orcas and to protect the pod. As the observer says in the caption accompanying the above photo:

A cluster of 30 battle-scarred males had come together to protect females and their young, demonstrating the loyalty for which their species is famous. Their attackers were fellow whales: orca, or killer whales, so-called because they kill whales – even sperm whales, three times their size. Here, two more sperm whales arrive to bolster the defence. Hal Whitehead, a scientific expert on sperm whales, says such attacks are rarely witnessed by humans.
…

As the orca continued their attack, the sperm whales changed formation, bringing their heads into the middle, tails outwards, deploying their most fearsome weapon: whalers spoke of their prey’s tails as ‘the hand of God’ – dispatching sailors into eternity. This “marguerite” formation (named after the flower) appeared to be less successful, so the sperm whales lined up again, now apparently using our boat as another line of defence. My fears that we were abetting the imminent slaughter by inhibiting the sperm whales’ escape were reversed. We seemed to be helping them.

The photographs taken by the researchers are quite amazing. However their presence was dangerous as they risked having the orcas turn on them and attack their small boat so at one point decided that the best course of action was to get rapidly out of there.

Of course you can be good without god » « Don’t people have better things to do with their time?