The French satirical magazine Charlie Hebdo has produced an issue whose cover mocked the victims of Hurricane Harvey in Texas as being punished by god for being Nazis. 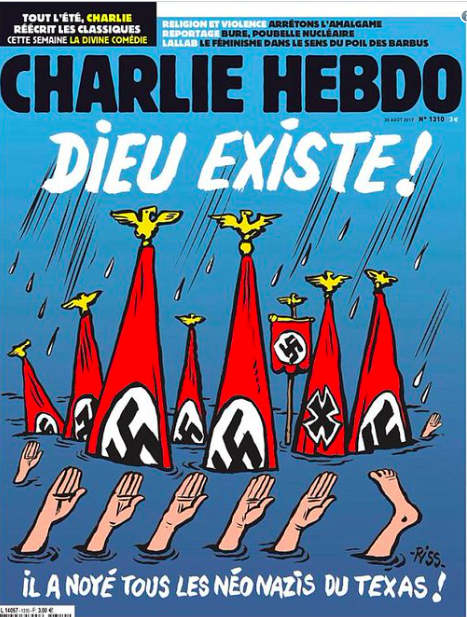 The top line says “God exists!” and the bottom line says “He drowned all the neo Nazis of Texas!”

This has naturally caused anger and people are condemning the magazine for its poor taste in humor that piles on the suffering of people who are the victims of a natural disaster. But Glenn Greenwald reminds us that it was not so long ago that many of the same people who are now condemning the magazine for its “characteristically vile” cartoon were not so long ago praising that magazine for doing the same thing. The difference? Then the targets of the earlier satire were Muslims. This time the targets are Christians.

THE NEWFOUND FREE SPEECH crusaders borne of the January 2015 murders of 10 Charlie Hebdo cartoonists in Paris sought to promulgate a new and quite dangerous standard. It was no longer enough to defend someone’s right to express their ideas while being free to condemn those ideas themselves – long the central tenet of the free speech movement (I defend their right to free speech even while finding them and their ideas repugnant). In the wake of the Hebdo killings, one had to go much further than that: It was a moral imperative to embrace and celebrate the ideas under attack and to glorify those who were expressing them, even to declare ourselves to be them (#JeSuisCharlie).

As a result, criticizing the content of Charlie Hebdo’s often-vile cartoons became virtually blasphemous. It became common to demand that one not only defend the right of the cartoonists to publish them but also, to show “solidarity,” one had to republish those cartoons no matter how much one objected to their content – thus adopting that speech as one’s own. Opposition to lavishing these cartoonists with honors and prizes was depicted as some sort of moral failure or at least insufficient commitment to free speech rights, as evidenced by the widespread, intense scorn heaped on the writers who spoke out in opposition to bestowing Charlie Hebdo with an award at a PEN America gala.

A dangerous conflation was thus imposed between the right to express Idea X and one’s opinion of Idea X. Of all the articles I’ve written in the last several years, perhaps the most polarizing and anger-generating were the ones I wrote in the wake of the Charlie Hebdo killings: one article that rejected the demand that one must celebrate and even republish Charlie Hebdo’s cartoons by criticizing those cartoons and illustrating the results of applying this new, dangerous standard (celebrate offensive and blasphemous cartoons by republishing them) universally; and then a series of articles defending the PEN America writers who objected to the Charlie Hebdo award on the ground that one could simultaneously defend free speech while refusing to praise, honor, and glorify those whose speech rights were under attack.
…

What happened here is beyond obvious: Charlie Hebdo was fun, delightfully provocative, bold, and deserving of awards when it was publishing mockery of Muslims. When its cartoonists began publishing exactly the same sort of thing aimed at white Americans, they became “vile,” “evil,” “despicable,” “losers,” and “traitors.”

Greenwald says that those who back in 2015 vehemently demanded that if one believed in free speech, then one must adopt the Hebdo views as one’s own have suddenly realized that the two views need not be conflated. He also takes aim at many people guilty of this kind of hypocrisy, among them the “anti-Islam high priest of New Atheism, Sam Harris” who back then wrote “When Glenn Greenwald castigates the dead Charlie Hebdo cartoonists for racism he’s not only proving that he’s a moral imbecile; he’s participating in a global war of ideas over free speech — and he’s on the wrong side of it.” (Cue the Harris apologists who will cry that Harris is once again being deliberately misunderstood or being quoted out of context.)

It is not really that hard to understand the separation between condemnation of the content of speech from the right to express it. Those who conflate the two are invariably pursuing a political agenda rather than a free speech one.

We all know why this happened: Police rage » « The napkin ring ‘paradox’