One of the many problems with prolonged wars, apart from the intense suffering it inflicts on the people on whose territory it is being fought, is that over time the whole purpose of the war becomes obscure. I am not talking about so-called ‘mission creep’ where the goals keep getting expanded, morphing from a quick effort to achieve a specific goal to becoming broader, such as creating a new government or infrastructure to replace what was destroyed, what is sometimes referred to as ‘nation building’.

With prolonged wars, like the one in Vietnam before and now Afghanistan, there comes a time when everyone except the general American public realizes that anything that could be considered as a victory is completely out of reach and that the war has reached a stalemate. At that point, the invading power, while still invoking the muscular language of achieving victory, actually has a more modest and secret goal, of how to withdraw from the conflict without being seen as having lost the war. This stage is characterized by bellicose language of victory mixed with laying the groundwork for explaining away the eventual defeat, using slogans such as ‘peace with honor’ and ‘forcing the enemy to the negotiating table’ and other euphemisms to mask the fact that face saving has now become the primary goal.

In Vietnam, the word used was Vietnamization, the process of installing a government and training a military that would supposedly take over from the US when the US left and keep that country going. Of course, the South Vietnamese government collapsed completely soon after. I doubt that anyone in the US government believed that their creation would survive for long. All it was looking for was for someone else to take the blame for the loss.

We see the same situation now in Afghanistan. The Taliban took power there in 1996. They were a truly horrendous government. One can go back and trace how earlier US support for the Mujahedeen as part of its Cold War strategy against the Soviet Union led to the eventual emergence of the Taliban but that is somewhat tangential to the point I am making here, which is that as bad as it was, the US had little trouble with dealing with it as the government of Afghanistan.

When 9/11 happened, the acts were not committed by any Afghans at all nor by the Taliban. It was done by al Qaeda, consisting of mostly Saudi Arabian expatriates that had been using that country as its base. Reports emerged that the Taliban were willing to negotiate with the US over what to do but the US was in no mood for discussions. What was demanded was blood as revenge and so it was decided to stage a quick military invasion to overthrow the Taliban and capture the al Qaeda leaders. The Taliban leaders simply melted away and went back to its old guerilla roots and so now we have Vietnam all over again, as the US fights a guerilla land war in Asia in hostile terrain with civilians bearing the brunt of the casualties

Al Qaeda has ceased to be major force, having spawned more vicious groups like ISIS and its numerous affiliates all over thee region. Its leader Osama bin Laden is dead. So since there were no Afghans involved at all with the original 9/11 attack, why is the US still there? This cartoon by Ted Rall succinctly explains. 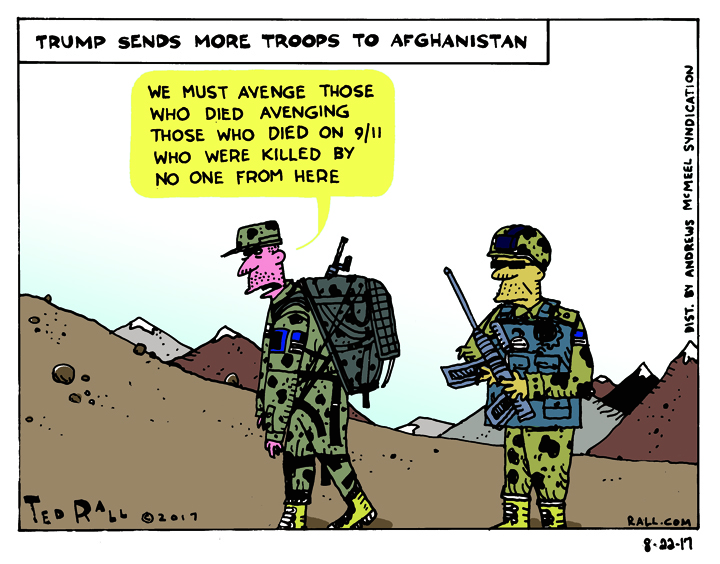 Donald Trump has one thing right: the United States is losing its longest war, the occupation of Afghanistan that began nearly 16 years ago. But his strategy is nothing new and certainly can’t succeed where Bush and Obama failed: sending in a few thousand additional troops. And the justification for the war: unless we throw more good lives after bad, all the fallen so far will have died for naught. Which, of course, they did.

Back to Vietnam, there was a song at Woodstock called I Feel Like I’m Fixin’ to Die by Country Joe and the Fish that captured the fact by 1968 that no one knew why the US was still fighting there but the military kept going, cynically killing random foreigners because they didn’t know what else to do. It is eerie how those sentiments translate so well to today.

And now with Donald Trump’s ‘new strategy’ speech on Afghanistan on Monday, we have clearly reached that stage once again. Military analyst Robert Bateman says that the speech was remarkable not only for its lack of any coherent strategy, but that it could not get even basic facts right.

Forget for the moment that President Trump or his speech writers apparently think that Afghanistan’s Chief of State is a Prime Minister, and not a president. And let the fact that the same writers seem to think we have been at war for 17 years rest, even though the actual number (15 years 10 months) is bad enough. All of that is beside the point. On Monday night, Mr. Trump once again declined to enunciate a strategy for war in Afghanistan. Hell, beyond the most basic platitudes, he did not even come close.
…

Capping it all off right at the end, Trump more or less fell smack dab into that Clausewitzian cycle I mentioned a couple months ago in another context. That is the one where each iota of pain you have already suffered, clearly linked by Trump to our honored dead in Arlington, becomes the justification for committing more resources in money and blood, to avenge or make up for the pain of the past.
…

About the only thing that came out of Monday night’s speech was the one thing Secretary of Defense Mattis really needed: Trump now owns this war. He cannot blame it on anyone else after this point. Which sadly, should be interesting.

In war, I hate “interesting.”

Pete Seeger also had an anti-war song from the Vietnam era, Waist deep in the big muddy, the Big Fool says to push on.

Afghanistan may not be muddy like Vietnam, but there is a new Big Fool saying to push on and his name is Donald Trump.