It looks like more and more people are making the assertion that Donald Trump is mere clay in the hands of his advisor Steve Bannon, as shown in last week’s Saturday Night Live sketch. These are not just the late night comedians on TV but political commentators as well. There have even been social media movements with hashtags #PostcardstoBannon and #PresidentBannon surfacing on Twitter.

The hashtag #PresidentBannon gained ground last week after Bannon was appointed to the National Security Council by an executive order signed by Trump. This decision came at a time when the country was still reeling under the effects of the president’s temporary travel ban on people from seven Muslim-majority countries as well as the suspension of the refugee program.

The above link gives some of the postcards tweeted to ‘president’ Bannon.

Since Trump desperately craves public approval and praise and is supposedly an avid consumer of the media because of his insatiable desire to see how he is being portrayed, he has to be aware of this growing sentiment. As any middle-schooler could have told him, the worst way to respond to taunting is to loudly assert the opposite because that tells the taunters that they are drawing blood. It is a kind of Streisand effect. You need to take the high road and refuse to dignify the taunts with a response. Of course, given his narcissism, Trump is psychologically incapable of that kind of restraint and that this has already got under his skin, as can be seen by a recent tweet where he said, “I call my own shots, largely based on an accumulation of data, and everyone knows it. Some FAKE NEWS media, in order to marginalize, lies!” In response, there have been taunts warning Trump that Bannon will be angry with him for claiming to be the boss.

There are also reports that Rosie O’Donnell has offered to play Bannon on Saturday Night Live. If her offer is accepted, this will be interesting on many levels. One is because she does have a strong physical resemblance to Bannon. The second is that O’Donnell and Trump positively loathe each other, which will give added bite to the portrayal. And the third is that with Melissa McCarthy’s wildly popular portrayal of Trump press secretary Sean Spicer, we would have two cross-gender castings. Apparently Trump, a man obsessively concerned with his own image and of those around him, is unhappy with Spicer being portrayed by McCarthy since that implies a lack of manliness in Spicer. To have two of his closest male aides being portrayed by women may well be upsetting to him.

Late night comedians are already increasing their references to ‘president’ Bannon. Here’s Stephen Colbert warning Bannon that things like being on the cover of Time magazine, even if in a highly unflattering photo, is not going to go down well with Trump who thinks that it is he who should be on every cover.

Trevor Noah of The Daily Show added to the skewering.

Matt Bors also gets on the bandwagon. 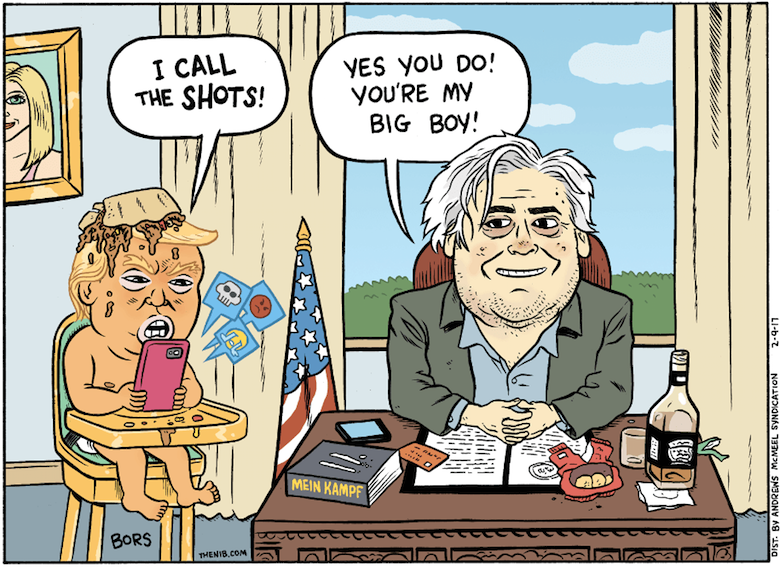 Trump has shown that he can take media criticism and turn it to his advantage. But being portrayed as someone else’s puppet has got to smart and it will be interesting to see how he continues to respond.