Josh Marshall looked at an instance last week where Trump went on Bill O’Reilly’s show on Fox News and continued to talk about Alicia Machado, five days after her name was mentioned at the debate, and what his comments there reveal about him.

The words amount to what we might term ‘stand-up narcissism’, a demonstration of a personality defect so profound and total that it becomes comedic in a way that makes a decent run at transcending its own awfulness. His self-regard and conscienceless-ness is so total that it is beyond him to realize that his “a good deed never goes unpunished” lament doesn’t make him look like a chauvinist asshole so much as a clownish version of a chauvinist asshole. It so perfectly mirrors Trump’s self-immolation with the Khans that it’s hard to believe the Clinton staffers who planned this could have imagined it would work so well.
…

Any halfway competent campaign would realize the ‘talking points’ on this issue are quite simple: Don’t talk about it! The ‘charges’ against Trump are nothing more than things he said on video. There are no charges. Just quotes. There is nothing in dispute. It’s just showing people what he said.

But he can’t. Why? Because he can’t be wrong. Not just ‘can’t be wrong’ but ‘has to be right’. Sounds like the same thing but it’s not. The latter quality forces him to keep talking and keep litigating a case he can’t possibility win.

One wonders how the insecure Trump will react to the reports of media commentators who say that, despite his many outright lies (because who cares about the truth anymore?), Mike Pence’s performance in his debate was better than Trump’s in his.

The cartoon strip Doonesbury has been caricaturing Trump on and off for nearly three decades and creator Garry Trudeau has now compiled a retrospective collection of all of them. It is clear that Trudeau saw right through Trump a long time ago as we see in this cartoon from 1999 that seems to implicitly reference the Dunning-Kruger effect that afflicts Trump and that I have written about before here. 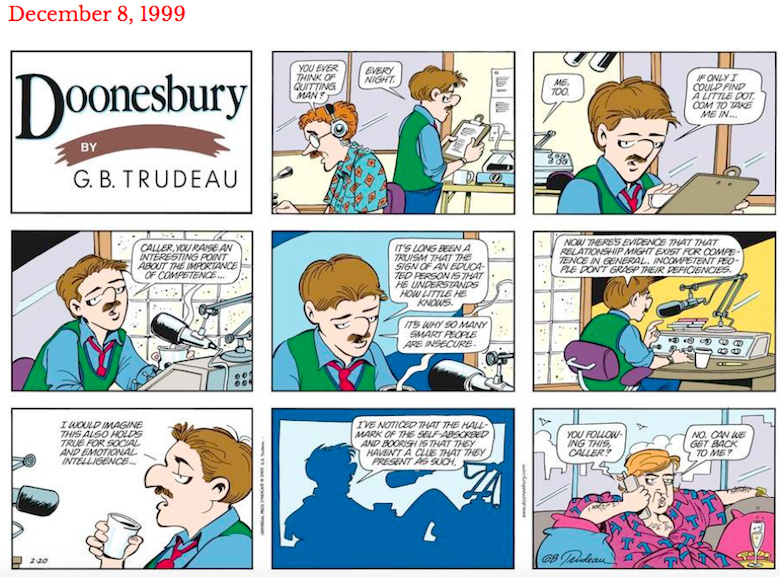 John Cleese succinctly explains the Dunning-Kruger effect in less than one minute, though he unfortunately conflates the ignorance and lack of self-awareness that lie at the heart of the effect with stupidity.