We have now reached a stage in American politics that is sadly all too familiar. Both Republican and Democratic parties are on the verge of nominating candidates that many of us progressives have reactions to ranging from dislike and distrust (in the case of Hillary Clinton) to utterly revolting (Donald Trump). We are then faced with the dilemma of whether to vote for the lesser of the two evils or say to hell with both of them and either not vote or vote for someone else who is more closely attuned to our own agenda but will definitely not win. In the current race, the Green party’s Jill Stein fills that role.

This is never an easy decision for those who take their vote seriously and each person has to weigh what to do carefully and their choice must be respected. There are those who think that the solution might be to vote for Trump because among his many statements and stances are some that seem better than Clinton’s (such as opposing TPP, getting rid of NATO). But who knows what he will do since he seems to have been on both sides of so many issues, as this cartoon illustrates. 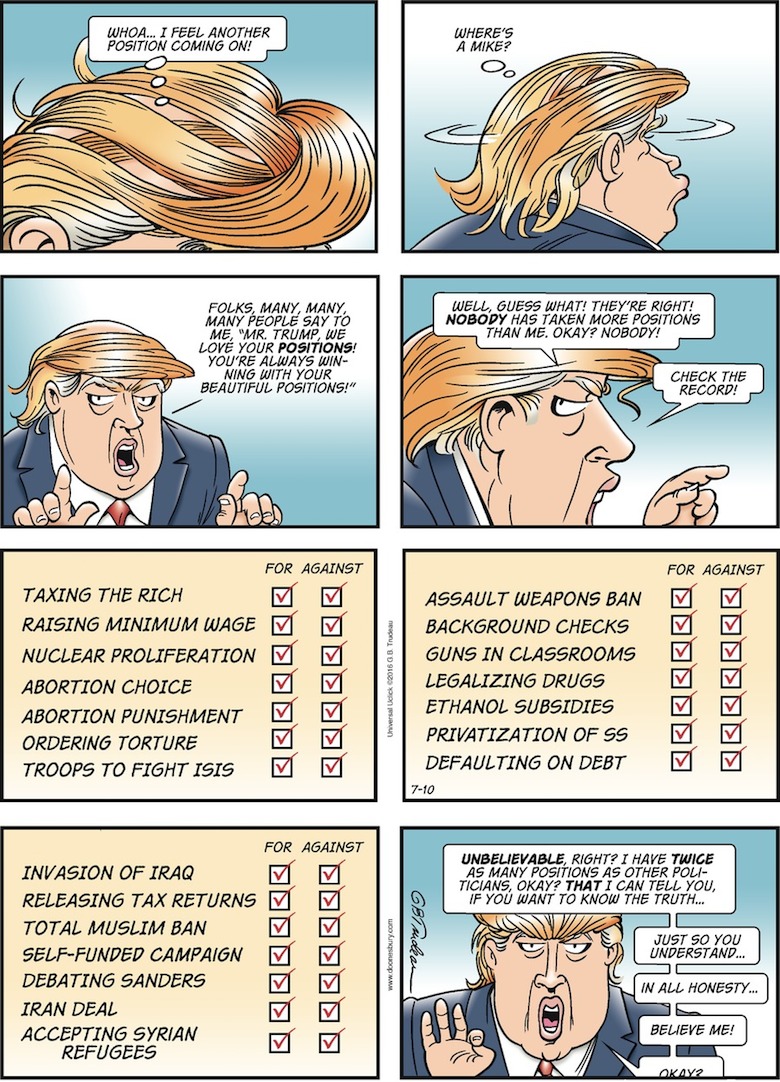 The fact that Republicans like Jeb Bush are leery of Trump’s intentions may give hope to some that Trump may be more progressive than he lets on. But that is buying a pig in a poke, with no idea how things will turn out if he wins. Others like Christopher Ketcham argue that the status quo is so bad that although they don’t like him, maybe Trump will create a total collapse of the system and something good might arise from the ashes.

I went for Sanders in the primaries, even gave several hundred dollars to his campaign. But there’s no way I’ll pull the lever for Clinton, because I know what a Clinton presidency bodes. More of the same neoliberal plundering with a friendly Democratic smile to quiet the left.

It happened under Obama: the warfare state and Wall Street reigning supreme while we all sing kumbaya because a black man has stamped his imprimatur on an intolerable status quo. It will happen again under Hillary.

What’s needed now in American politics is consternation, confusion, dissension, disorder, chaos — and crisis, with possible resolution — and a Trump presidency is the best chance for this true progress. This is a politics of arson. I’d rather see the empire burn to the ground under Trump, opening up at least the possibility of radical change, than cruise on autopilot under Clinton.

Protest votes are dangerous because you never know what might happen. There have been anecdotal reports of people who in the Brexit referendum voted for Leave as a protest vote because they did not think they would win and are now regretting their actions. These are likely too few to have swayed the outcome but it is still a cautionary tale

But that still leaves the question of whom to vote for president in November.

What informs my own decision to decide to reluctantly vote for Clinton is that there are many things that can seriously affect the lives of many people who are less well-off and these take place far away from the big issues that generate headlines in presidential races. A Democratic president, even someone as dreadful on major issues as war and oligarchic power as Hillary Clinton, will appoint people in key administrative positions everywhere in government agencies who will mostly take decisions that will be better for the less advantaged than a Republican appointee would, such as when it comes to worker rights or labor relations or health benefits or discrimination or a whole host of other things. Cabinet secretaries, department heads, people on various boards overseeing both the public and private sectors can issue directives and interpret rules in ways that help ordinary people or hurt them, and you are more likely to get better people under a Clinton administration than a Trump one.

There is also the well-worn issue of Supreme Court justices and other federal judges. It is true that this is often used by both parties as a cudgel with which to frighten people to vote for poor candidates and thus avoid having them take progressive stances on other issues. But that does not make it a marginal issue. With Clinton, we can expect judicial nominees at all levels who will be pro-business and defer excessively to government use of power, but will also be more likely to be sympathetic to the rights of marginalized groups, whether they be based on income, race, ethnic, gender, or sexuality. Trump’s list of nominees that he released consists of people who will be pretty much opposed to all those things. This is not insignificant.

There was a time when I would have voted third party for the candidate who truly shared my values even though I knew my candidate would lose because I despised the idea of ‘lesser of two evils’ voting. But as I have got older my attitude has changed. It is not because I have got more conservative in my politics. If anything, I have gone the other way and feel even more strongly about issues of social justice than before. But now I am more conscious that as a comfortably off person, whether Clinton or Trump wins is not going to adversely affect me personally because I belong to the class that both will look after. Also, as an older person, I will escape the long-term consequences of my decisions which will have to be borne by the generations to come.

I feel that I need to seriously take into account which party candidate in the presidential office will help more those who are younger and less fortunate, even if what they do is incremental and both party candidates will likely take major decisions that I disapprove of. I take some consolation in that the shift in positions that have been forced on Clinton and are reflected in the Democratic party platform are at least mitigating factors that partially act as a salve on a very painful decision to vote for her.

Stein and Sanders are much closer on the issues than Sanders and Clinton and so Stein is understandably not pleased that he endorsed Clinton and turned down her offer to replace her as the Green party nominee. Charles P. Pierce says that it would have been a big mistake for Sanders to accept her offer. Trump, on the other hand, clearly had hoped that Sanders voters would turn to him and is disappointed with the endorsement by Sanders of Clinton, though he is still making a pitch for them.

So while I prefer Stein and the Greens to Clinton and the Democrats, I have to agree with the reasons given by Sanders in a letter to his supporters explaining his decision to campaign for Clinton.

You should know that in the weeks since the last primary, both campaigns have worked together in good faith to bridge some of the policy issues that divided us during the election. Did we come to agreement on everything? Of course not. But we made important steps forward.

Hillary Clinton released a debt free college plan that we developed together which now includes free tuition at public colleges and universities for working families. This was a major part of our campaign’s agenda and a proposal that, if enacted into law, would revolutionize higher education in this country.

Secretary Clinton has also publicly committed to massive investments in health care for communities across this country that will increase primary care, including mental health care, dental care, and low-cost prescription drug access for an additional 25 million people. Importantly, she has also endorsed the enactment of a so-called public option to allow everyone in this country to participate in a public insurance program. This idea was killed by the insurance industry during consideration of President Obama’s health care program.

During the Democratic platform proceedings in St. Louis and Orlando, we were victorious in including amendments to make it a clear priority of the Democratic Party to fight for a $15 an hour federal minimum wage, expand Social Security, abolish the death penalty, put a price on carbon, establish a path toward the legalization of marijuana, enact major criminal justice reforms, pass comprehensive immigration reform, end for-profit prisons and detention facilities, break up too-big-to-fail banks and create a 21st century Glass-Steagall Act, close loopholes that allow big companies to avoid taxes by stashing their cash in offshore tax havens and use that revenue to rebuild America, approve the most expansive agenda ever for protecting Native American rights and so much more.

All of these progressive policies were at the heart of our campaign. The truth is our movement is responsible for the most progressive Democratic platform in the history of our country. All of that is the direct result of the work that our members of the platform committee did in the meetings and that you have been doing over the last 15 months.

But none of these initiatives will happen if we do not elect a Democratic president in November. None! In fact, we will go backward. We must elect the Democratic nominee in November and progressive Democrats up and down the ballot so that we ensure that these policy commitments can advance.

It is extremely important that we keep our movement together, that we hold public officials accountable and that we elect progressive candidates to office at the federal, state, and local level who will stand with us.

That is the real challenge. The sad truth about Democrats is that once they elect Democratic office holders they not only let their guard down and let them get away with pro-war and pro-oligarchy policies, they even defend those decisions as somehow correct, even if they opposed those same actions when done by a Republican. This is a real problem. We have to realize that the only way to achieve lasting change is by exerting pressure at all levels all the time.

That is not easy to do but until we have a viable third party that has made major inroads at the state and local levels and created an infrastructure, that is the only way.