Politicians love to talk about the middle class, especially during election season which in the US is pretty much all the time. This group is seen as being the most important in terms of voting strength. But the definition of middle class is a little vague, since it can be defined in terms of income, aspiration, wealth, or levels of consumption. This graphic looks at how the St. Louis Federal Reserve Bank also classifies them in terms of demographic factors like age, education, and race, with those doing better than the middle class defined as ‘thrivers’ and those doing worse as ‘stragglers’. 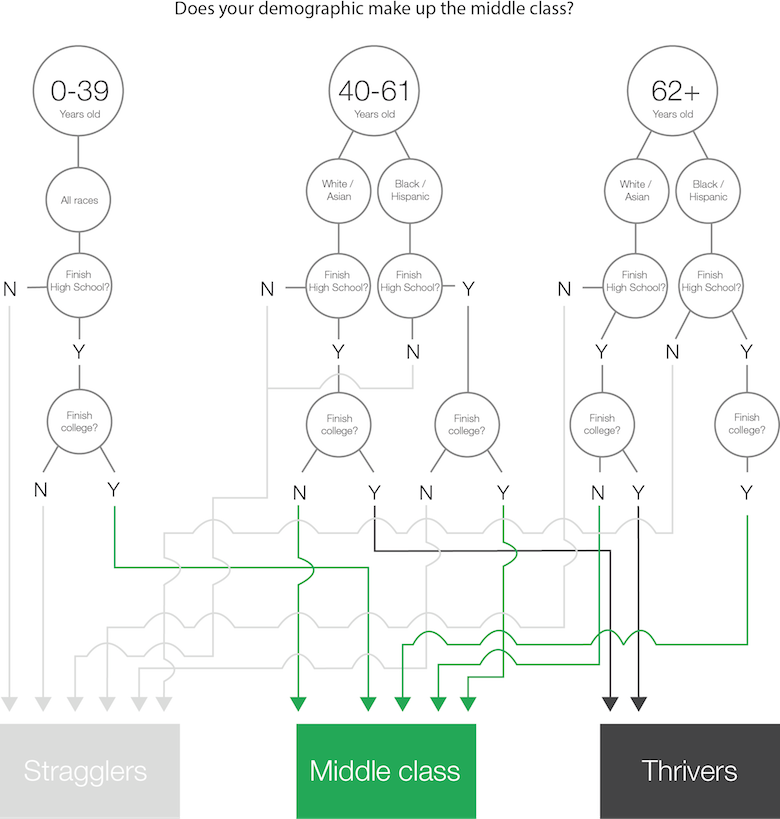 In that model, because of my age, ethnicity, and education, I would be considered a thriver irrespective of my income, whereas a black or Hispanic person of the same age and education and income as me would be middle class. In fact, it seems like black and Hispanic people are completely excluded from the thriver class. I find this puzzling.

The other method is to fix middle class in terms of an income range and seeing whether the number of people within that range in increasing over time (good) or decreasing (bad). This is how the influential Pew survey does it. It takes the median income and defines middle class as having incomes ranging from two-thirds of the media to twice the median family income. In 2014, for a family of three this works out to the range $42,000 and $125,000. Pew finds that the number of families in this range has been shrinking from 2000 to 2014.

The terms ‘white collar’ and ‘blue collar’ can be used to distinguish between the different kinds of work with working class being used for the latter. I also read of an interesting distinction about there being two kinds of jobs: those in which you showered before going to work and those in which you showered when you came home after work. ‘Working class’ would seem to be more appropriate for the latter.

What is interesting is that most people seem to prefer to view themselves as belonging to the middle class, since it suggests a comfortable middle ground. Calling oneself poor suggests that one is a failure. Calling oneself rich is seen as pretentious and boastful and is rarely done except by people like Donald Trump. As a result, even people who might be poor by income may, because of education or social background or recreational interests, still consider themselves to be middle class.