CBS News anchor Scott Pelley interviewed Trump for the show yesterday and I found it hilarious. Trump was himself, supremely confident and unfiltered. He is promising universal health care, opposing cuts in Social Security, raising taxes on some wealthy people and eliminating some tax loopholes while reducing taxes on the middle class and the poor, repairing all the broken infrastructure, canceling free trade agreements and imposing tariffs on imports by US businesses that shift manufacturing overseas and also from countries like China that he thinks are acting unfairly. Today he released his tax reform plan that he only teased Pelley about and, as Kevin Drum points out, it is most specific when it comes to giving breaks for the rich, no doubt to try and gain establishment Republican and business support.

He again said those familiar things that have offended huge swathes of the public such as his plan to build a wall and deport all undocumented immigrants (he would do this ‘humanely’ of course), although he said that his wall would have a huge door because he wants to have immigrants, just legally. He also promised to create a super-colossal military and if necessary send US forces to fight ISIS in Iraq and either get Russia to fight ISIS in Syria or failing that let ISIS destroy the government of Assad and then send US military in to destroy ISIS.

How would he pay for all this? Easy. Under his plans the economy would grow at an unbelievable rate and generate huge amounts of revenues for the government. He will have the best minds on Wall Street working for him.

How would he get all these measures through Congress since, as he conceded, the establishments of both parties don’t like him that much? Easy. He knows how to make deals with members of Congress since he has done so all these years in order to run his businesses.

How would he get other countries to not retaliate against the US for his trade tariffs? Easy. Other world leaders will respect him. He deals with foreign governments all the time and so knows how to make deals with them and he will have the best negotiators, not the wusses that president Obama sends that have caused the US to lose respect so that other countries just walk over the US.

It is vintage Trump can-do bragging, with all potential difficulties swept contemptuously aside. You can see why it would appeal to a certain kind of person who thinks that there are simple solutions to complex problems and that all it takes is determination to carry them out. And there are quite a few of them as can be seen by the support for Trump, Ben Carson, and Carly Fiorina. 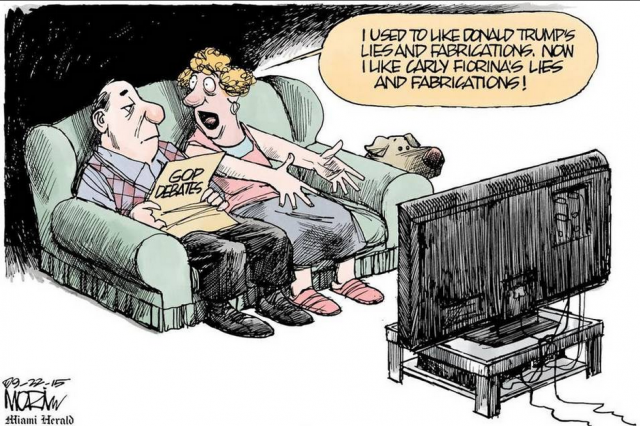