The results of American elections are usually easy to predict. It is almost always the case that the candidate who can raise the most money wins, as depicted in this cartoon, with any role for actual voters quickly eliminated very early in the process. 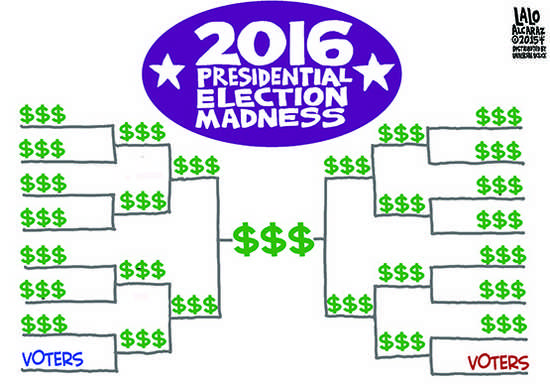 But it used to be that the money had to be raised from many people because there were limits on how much each person could contribute, at least legally. But no more. Recent US Supreme Court rulings such as Citizens United have cleared the way for pretty much unlimited amounts of money to be used in support of candidates, and individual wealthy people can now bankroll a single candidate using the thinly disguised vehicle of SuperPACs all the way through the process.

As a result, we now have the disgusting sight of the people who would be president groveling before billionaires, trying to curry favor with them in order to get sponsorship. Maybe the candidates should wear the names of their sponsors, like they do in professional sports.

Dave Gilson writes that the share of money into elections coming from the very wealthy, the 0.01% of donors, has nearly tripled from 1980 to 2012. And this just takes into account the money that is publicly disclosed and not the so-called dark money funneled through Super PACs that keep their donor lists secret (except from the candidates of course). Hence it is clear that the word ‘election’, with its connotation of voting as the main element, is no longer appropriate for the process by which the US selects its president every four years and the more suitable term is ‘auction’.

We are already familiar with the names of Sheldon Adelson, Foster Friess, and the Koch brothers who are already conducting auditions to see which candidate meets their needs, i.e., is willing to do what they want on the issues they care most about. But there are others. The newest bidder to join that group is an 82-year old billionaire named Norman Braman who seems to be leaning towards backing Marco Rubio to the tune of up to $25 million. As with Adelson, Israel seems to be Braman’s main concern. Lindsey Graham is also openly courting pro-Netanyahu, pro-Likud backers. Hedge fund billionaire Paul Singer is also in the market for a candidate but has not committed as yet.

Billionaire Kenneth Langone is shopping around for a candidate and at one time seemed to be favoring Chris Christie though since the latter’s star is fading, Langone’s eyes might start wandering to others. Langone is another one of those billionaires who whines about how everyone is mean to rich people and recently said that critics of wealth inequality in the US were like Hitler. That did not go well.

But as this article shows, there are yet more billionaires backing candidates. Ted Cruz is being backed by Robert Mercer and Jeb Bush by Woody Johnson respectively, while other billionaires like Joe Ricketts and Peter Thiel have still not decided on their purchase.

The much-sought-after Koch brothers initially seemed to be favoring Scott Walker but he apparently did not do well at his audition and now they are reportedly back to being uncommitted.

As Doyle McManus says, now the most important people in elections are not the candidates, they are the mega-donors, and that “There’s something grotesque about a process that requires serious politicians to hover anxiously around a few donors who can make or break a campaign at whim.” But we, and the candidates, are long past feeling any shame. 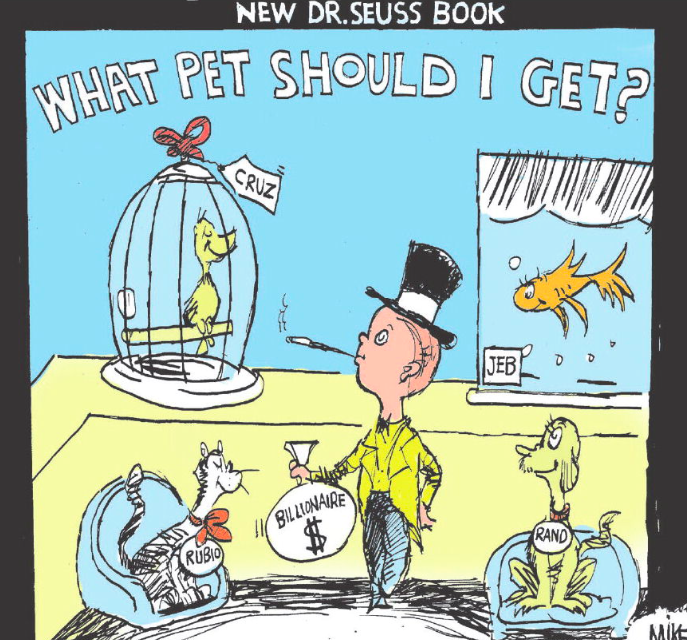 Apparently there are (at least officially) 492 billionaires in the US (out of a record number of 1,645 in the world) so there are still many sugar daddies who are available to be tapped by the other candidates.

Democrats have their own billionaire supporters so it is not like they are strapped for cash either. The difference seems to be that individual billionaires have not been identified with specific candidates, at least as yet.

The Daily Show had a segment on the buying of candidates.

(This clip aired on May 7, 2015. To get suggestions on how to view clips of The Daily Show and The Nightly Show outside the US, please see this earlier post. If the videos autoplay, please see here for a diagnosis and possible solutions.)

Instead of wasting everyone’s time with quaint old-fashioned elections that don’t really matter, maybe the high-profile auction house Christie’s could get all the billionaires in one room and get them to bid on the various candidates, and the candidate who gets the largest bid becomes president and the billionaire who bought him or her dictates what the president should do. At least that process would be more transparent than what we have now.

At least one candidate (Bernie Sanders) is not beholden to the billionaires nor seeking their money. You can go to Sanders’s website to join the campaign and contribute and here to see where he stands on the issues.