The recent killing by drones of two Americans held hostage has opened up the debate once again about this policy. President Obama has felt obliged to apologize for their deaths. Of course Americans have been killed by drones before and there have been many, many innocent civilians killed also but since they were Muslims, they did not count and president Obama, who seems to love the drone assassination program, never felt obliged to apologize for any of those many deaths except in an oblique way.

Though the US government has not revealed the number of civilians killed in its drone war, the Bureau of Investigative Journalism reports that at least 486 innocent people have been killed by strikes in Pakistan and Yemen in the past decade. More than 1,000 civilians may have died in the clandestine campaign, according to the Bureau. Drone strikes have also occurred in Somalia and Afghanistan.

“It’s exceedingly rare that the US acknowledges killing a civilian in a drone strike,” Tayler told DW. “In the cases that I’ve looked at, the US has only made this acknowledgment when it’s killed an American, or in this the case the citizen of a country that’s allied with the United States.”

“This is an unconscionable double standard,” Tayler said. “It is outrageous that the US will not own up to killing non-Western civilians in the same fashion.”

Obama had taken pains to say before that he only authorizes these killings if he has “near certainty that no civilians will be killed or injured, the highest standard we can set”. But the recent deaths reveal that he is much more casual because they bombed a compound without even knowing who was inside.

The strike hit a compound in the Afghanistan-Pakistan border region, according to the US government. But it’s unclear who, if anybody, was specifically targeted. Ahmed Farouq, an alleged American member of al Qaeda, was killed in the same strike. But the White House says it had no knowledge of his presence in the compound beforehand.
…

Weinstein, a 73-year-old American doctor, was taken hostage in 2011 in the city of Lahore. Lo Porto, a 39-year-old Italian, went missing in 2012 after arriving in Pakistan to work for the German aid agency Welthungerhilfe. The White House said it also had no knowledge of their presence in the compound prior to the strike.
…

“These new disclosures raise troubling questions about the reliability of the intelligence that the government is using to justify drone strikes,” Jameel Jaffer, the ACLU’s deputy legal director, said in a press release responding to the deaths of Weinstein and Lo Porto. “In each of the operations acknowledged today, the US quite literally didn’t know who it was killing.”

What is interesting is that the Republican presidential candidates, so quick to blame Obama for the deaths of Americans as was seen in their ongoing campaign about Benghazi, have been silent about these deaths.

But what’s amazing is that an issue that sparks so much political debate — Should drones be used in these kinds of operations? What about against American citizens, even those with al Qaeda ties? Should there be more checks and balances? — the 2016ers essentially punted. These are ALL questions American voters should get answers from the people vying to become the next commander-in-chief. But no one was comfortable having that conversation yesterday.

Glenn Greenwald points out how the US government gains support for its drone killings.

This is the toxic tribalism that repeats itself over and over throughout the West. Western victims are mourned and humanized, while victims of Western violence are invisible and thus dehumanized. Aside from being repugnant in its own right, this formula, by design, is deeply deceptive as propaganda: It creates the impression among Western populations that we are the victims but not the perpetrators of heinous violence, that terrorism is something done to us but that we never commit ourselves, that “primitive, radical and inhumanely violent” describes the enemy tribe but not our own. (It’s the same tactic that explains why we hear so much about American journalists imprisoned in adversary nations such as Iran and North Korea, but almost nothing about Muslim journalists imprisoned for years without charges by the U.S. government, thus deliberately creating the false impression that only those Bad Countries, but not us, do this.)

This propaganda is effective. Dan Froomkin and Jon Schwarz discuss a recent AP news story that claims that there exists “broad support among the U.S. public for a targeted killing program begun under President George W. Bush and expanded dramatically under Obama.” The story was based on an AP survey.

That sounds like solid support until you look closely at the wording of the question. The survey finds that 60% of Americans support the use of drones to “target and kill people belonging to terrorist groups like al-Qaida.” But of course, drones don’t kill only those targets. They also kill a lot of civilians, including Americans. What if the question were worded to include that possibility? Froomkin and Schwarz find that the answer to that buried right at the end of the AP report.

Drone skeptics say most polls on the subject frame the question with the assumption that those targeted are terrorists, when it’s not clear that is always the case.

“Almost everyone, of course, is going to support killing people who are trying to kill us, but that’s not who we are necessarily targeting in each case,” said Sarah Kreps, an associate professor in the Department of Government at Cornell University.

Kreps examined poll data and found that if respondents are confronted with evidence of errors and civilian casualties in some drone strikes, support for the strikes drops below a majority.

As Froomkin and Schwarz say, a good question to ask that reflects the actual reality would be: “Do you support the U.S. government killing Americans who it claims to be involved in terrorism, without charges, trial or a lawyer?” 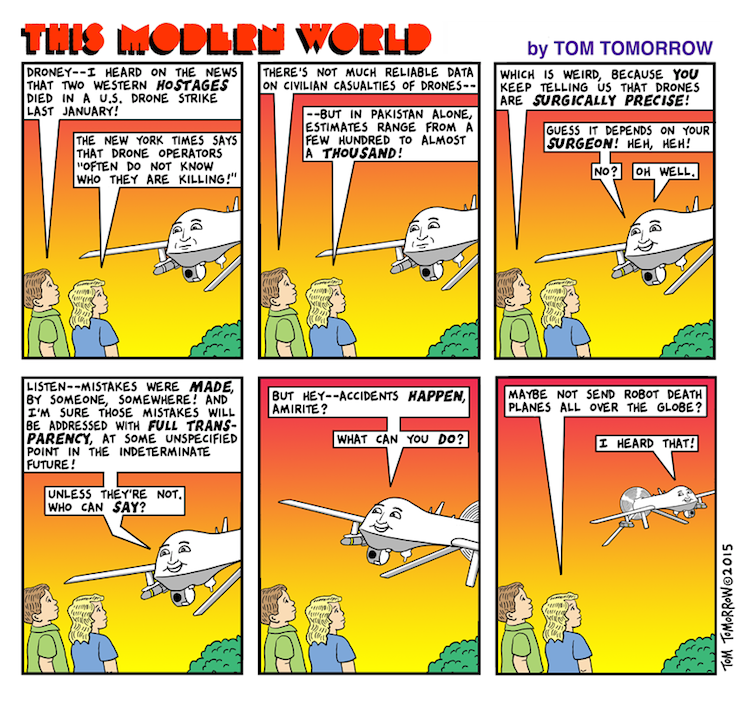